SAN FRANCISCO — Joe’s got cause for concern. He’s a puny blue block on stubby peg legs, and he’s totally at the mercy of the rather dickish game programmer who just created him for cheap, cruel amusement. And it wasn’t enough to just dump him in a side-scrolling maze rife with puzzles and comedic superdeath while his maker constantly harasses and berates him. If Joe stops moving, his life meter drains. Fast.

Concerned Joe (releasing later in 2013 for PC, Mac, and Linux) is a breakneck side-scroller that’s 100 percent mean streak and the biggest, best surprise of the 2013 Game Developers Conference. It’s real creators are designer Nicolae Berbece from Romania and programmer Omar Shehata from Egypt. After working together on Concerned Joe for the last several years, they met face-to-face for the first time this week at GDC.

Neither is of legal drinking age in the U.S.

They met online four years ago when Berbece posted his idea for a game on the Newgrounds gaming forums. “I was like, ‘Can anyone help me with this?'” says Berbece. 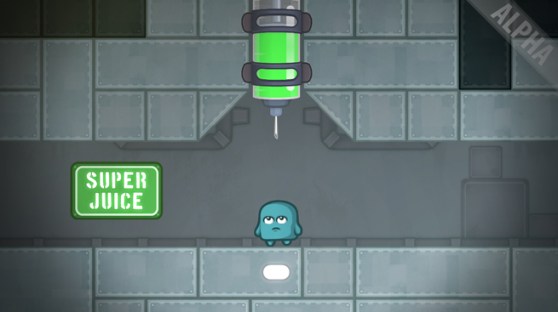 Their first two games went nowhere, but then they hit on a few Flash games that made a little money, one of which was a simple version of Concerned Joe. They used that capital to form a company — Those Awesome Guys — bankroll a bigger version, and hire voice talent … Newgrounds admin JohnnyUtah, an animator by trade with the perfect snide edge in his voice. “We both do the writing,” says Berbece, “We agree on the final thing. Then we send it off to JohnnyUtah, and he completely improvises half of it. We get the lines back and change the game to fit.”

The results so far are Super Meat Boy evil, progressively narrated like Bastion by a dudebro version of GLaDOS from Portal, and, in the 20-minute demo I played, anchored by wonderfully crushing physics-based puzzles. Early on, the narrator injects Joe with IHTMOID, short for “I Have To Keep Moving Or I Die.” Only left-right motion works; the narrator mocks you if you try to survive just by hopping in place. And then Joe explodes.

Even better, some switches require Joe to stand still for several seconds before they activate. It’s nerve wracking — Joe scrunches up his face in anticipation as his life meter hits the terminal stage — and cheer-worthy when you pull it off just in time. Forget hints. You’re dropped in a room, and it’s up to you to leave it. The narrator’s too busy throwing a monocle and Teddy Roosevelt moustache on Joe for fun — or dropping him into a repeat-o-die suicide boxes for a few minutes. And he doesn’t really care if you figure it out, anyway, because killing Joe is pretty funny.

“It’s mainly trying to make a really evil game that mocks the player and games in general,” says Berbece. And to do it on the cheap. Shehata literally built Joe with love … specifically, Love 2D, an open-source game engine. 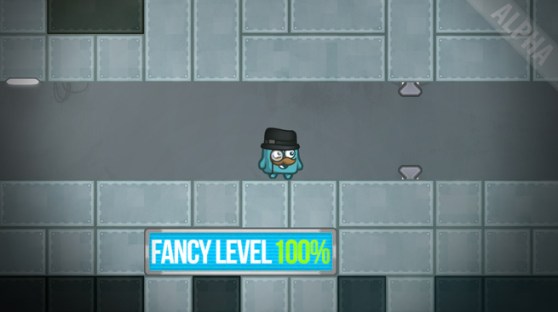 Now 18 and 20, Shehata and Berbece spent the last seven months producing the surprisingly polished Concerned Joe alpha demo in time for a spot at GDC Play. Before bringing their game to San Francisco this week, they’d never even heard each others’ voices. “It was all text,” says Berbece. “When we met at the hotel, we were like, ‘Whoa, you’re real!'”

And despite their age, Concerned Joe demonstrates maturity of design and a pitch-black sense of humor that constantly cracked me up. It even allows for magical moments of that’s-so-wrong chaos, like watching springboards juggling Joe’s corpse in midair — deceased Joes hang around in some areas —  and bashing it into an also-juggled weighted box while the respawned, live Joe frantically zoomed around the room trying to activate doors. The scripted gags are even better.

It’s a definitely a squeaker against Supergiant Games’ Transistor — I’d be happy just playing Transistor’s demo for the next year — but I’ve got to give it to Concerned Joe. It won GDC 2013 for me in the same way Supergiant’s Bastion did two years ago. I didn’t see it coming. And that’s why you should kept a sharp eye out for it and its creators. They’ve got long careers ahead.