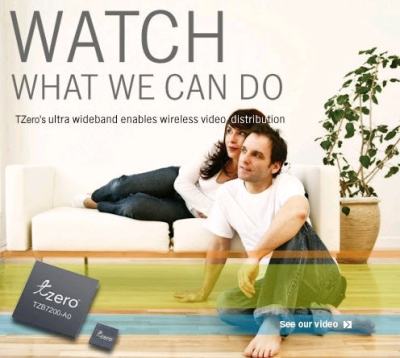 Goodbye to another ultra-wideband company. Tzero Technologies has shut down its business of making wireless chips for transferring high-speed video from one consumer electronics device to another, according to an EE Times report.

We’ve been expecting this ever since troubles began in November with the shutdown of the biggest firm in the industry.

The company joins a shakeout in UWB that has claimed WiQuest and Focus Enhancements. Artimi merged with Staccato. UWB started with much fanfare as a way to get rid of wires between consumer devices and an easy way to move high-definition video around the home.

But the promised high-speed data transfer wasn’t as fast as expected.  Intel was also once developing a UWB chip set but abandoned that project in favor of investing in UWB startups. Linley Gwennap, an analyst at the Linley Group, told us in November that you can probably stick a fork in this technology now.

One of the problems was that the companies that led with the technology tried to get other companies to back their version of a standard. But a standard battle erupted that took several years to resolve with Intel, Texas Instruments and Staccato on one side and Freescale and others on the other. The WiMedia standard was only adopted at the end of 2005.

The first chips came out two years ago, but they were expensive solutions requiring two or three chips. And in reality, those chip sets transmitted data far below the theoretical speeds. Market researcher In-stat said only 100,000 or so UWB chip sets shipped in 2007, with the figure expected to grow to 190 million by 2012. Products that have hit the market include a wireless USB adapter from Kensington.

The slower-than-promised chips were a disappointing outcome for a technology that had been promised for more than a decade. The Federal Communications Commission started looking at proposals for the use of air waves for UWB technology in 1998. It finalized its ruling in 2002.

It allowed companies to use a broad frequency range of 3.1 gigahertz to 10.7 gigahertz of the wireless spectrum, but it limited the range to 10 meters or so in order to ensure there was no interference with police, fire or military radios. The first low-frequency chips did run into interference, so now the new chips are focusing on 6-gigahertz and up.

Now we will see if the industry moves on to something new, such as Amimon’s WHDI standard for high-speed data transfer over the 5-gigahertz spectrum or SiBEAM’s 60-gigahertz solution.