The U.S. video game industry will grow 30 percent from $15 billion in 2014 to $19.6 billion in 2019, according to a broad media and entertainment forecast by accounting firm PwC. That’s a mature compound annual growth rate of 5.5 percent. 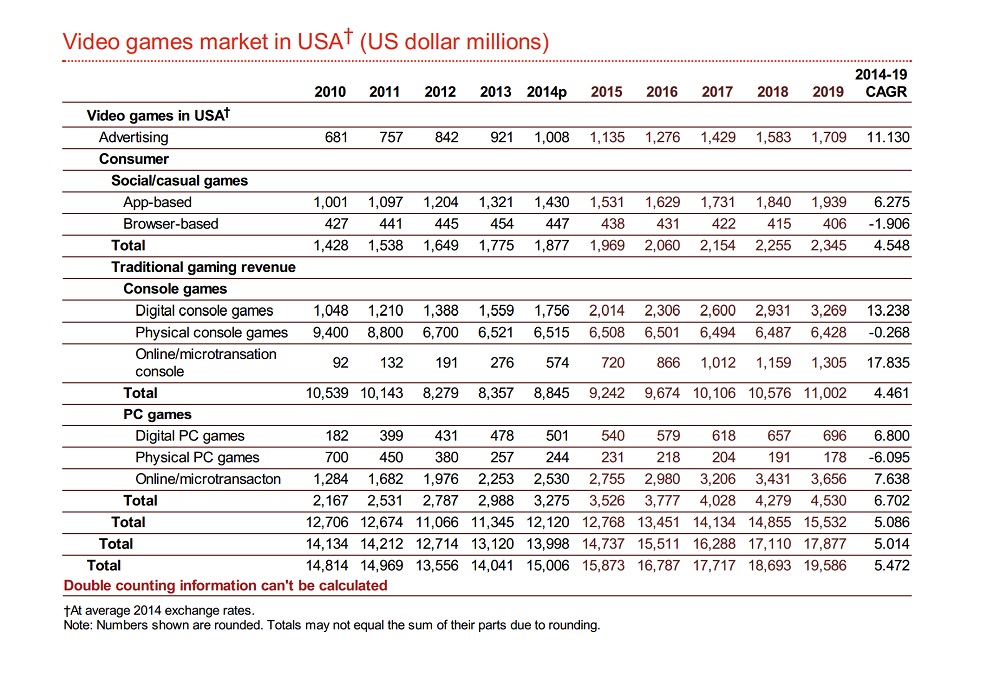 That should make your average game developer feel a bit small in the grand scheme of things. You may make a killer game for the Xbox One video game console. But your business will generate less money than the Yellow Pages.

Still, there’s a lot to be cheerful about. Traditional games have fallen $600 million in revenue from 2010 to $12.12 billion in 2014. But that figure, which includes traditional console games, digital console games, and online microtransactions on consoles, is still expected to grow to $15.53 billion in 2019. That’s a compound annual growth rate of 5.1 percent for a part of the industry that some people say is doomed. Traditional console and PC games were still about 80.8 percent of game industry revenue in 2014, while the percentage will be about 79 percent by 2019.

Of course, PwC is leaving a lot of things out. They’re not counting hardware sales of gaming PCs, consoles, or other devices.

While many have predicted the slow decline of consoles, the segment is holding up well. Total console games are expected to grow from $8.84 billion in 2014 to $11 billion in 2019, a CAGR of 4.5 percent. Physical console sales will decline only slightly from $6.51 billion to $6.43 billion in the U.S., thanks in part to the strength of retail chains such as GameStop and Best Buy. PwC noted there’s still a vibrant used game market that doesn’t contribute to revenue and makes new games appear more affordable, since consumers can trade them in.

“As the world becomes more connected with multiple devices able to play games, several analysts predicted an accelerated decline of the console market. But consoles will remain relevant to a large proportion of US gamers for the foreseeable future. For most people they still offer the most compelling gaming experience – big games (Call of Duty, Destiny), engaging communities, and rich multiplayer opportunities,” the report said. 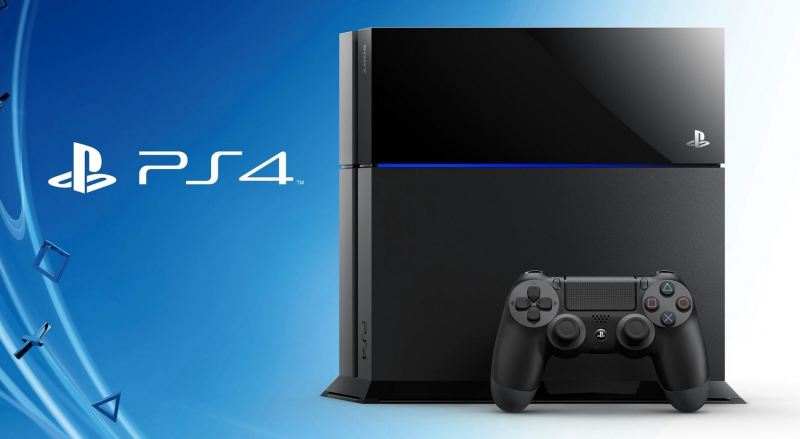 Above: PlayStation 4’s dearth of first-party releases may continue.

The arrival of new game consoles from Sony and Microsoft in 2013 signaled the start of a new four-year to five-year console cycle. The PlayStation 4 has sold 18.5 million units to date in world, while the Xbox One has topped 10 million (based on the last reported figures). Nintendo’s Wii U hasn’t sold well, but it had a decent latter part of 2014 thanks to sales of Amiibo toy-game characters. Digital console games are expected to grow from $1.76 billion in 2014 to $3.27 billion in 2019, a CAGR of 13.2 percent.

Meanwhile, online/microtransaction console games revenue is the fastest-growing part of console-related traditional gaming, rising from $574 million in 2014 to $1.30 billion in 2019, a CAGR of 17.8 percent. That’s due to the emergence of microtransactions and free-to-play games on consoles.

Beyond traditional games, social/casual gaming revenue in the U.S. was worth $1.88 billion in 2014. It will grow at a CAGR of 4.5 percent to $2.35 billion by 2019. That is reflecting a switch from browser-based to app-based revenue. Overall, the social-casual segment of gaming will be just 12 percent of the total revenue in 2019, compared to 31 percent share in China by 2019.

Video game ad revenue has grown from $681 million in 2010 to $1.01 billion in 2014. It is forecast to grow to $1.71 billion in 2019, a CAGR of 11.1 percent. Game ad revenues are stronger in the U.S. than any other market, due in part to the maturing of advertising, the fragmented media landscape in the U.S., high digital video recorder ownership (which makes it easy to skip TV ads), high social network engagement, and low newspaper readership. All of that drives advertisers to seek out consumers in places like gaming.

PwC said there is a growing of diversity of game-capable machines hitting the market, like Amazon’s Fire TV and Google’s Nexus Player. Ouya, the once-heralded Android game console, didn’t succeed. But new Android devices such as Razor’s Forge, Snail’s Obox, and Nvidia’s Shield are coming. Smart TVs will soon be capable of running better games, and cloud gaming is moving forward as well, PwC said.

If there’s one trend that PwC pointed to that was gaining the most steam, it is the free-to-play business model, where players can play for free and pay real money for virtual goods. Free-to-play is getting stronger across multiple platforms. And while the market is growing, it’s still hit-or-miss for a lot of game publishers. PwC also pointed to Kickstarter as making a difference in the funding of smaller independent titles, including the highly successful campaign of Star Citizen, which has raised $83 million to date.