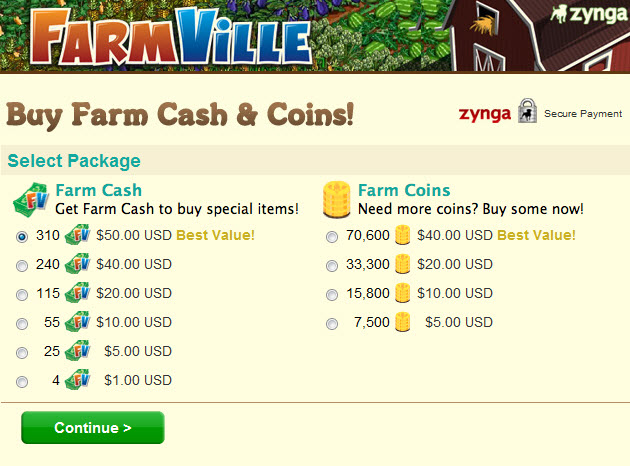 Are your friends loading up on tractor fuel in FarmVille, the most popular social game on Facebook? If so, you might understand this prediction: the U.S. virtual goods market is expected to hit $2.1 billion in revenues in 2011.

The Inside Virtual Goods report predicts that 2011 revenues for virtual goods — which include things such as better weapons or decorations in games that users pay real money for — will be up 40 percent from $1.6 billion in 2010. The reported was created by Justin Smith, head of Inside Network, and Charles Hudson, who runs the upcoming Virtual Goods Summit. 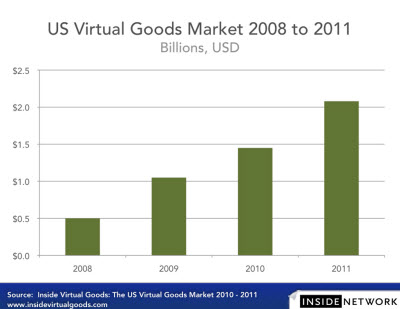 The growth rate is slowing down in 2011 compared to 2010 and 2009 (when sales were $1.1 billion), mainly because it’s harder to sustain high growth rates with large numbers. But Smith said in an interview that the market slowed down this year after Facebook chose to limit viral communications for games on its social network.

“If 2010 was the year that virtual goods made a splash in western markets, 2011 will be the year that these markets begin to mature as the collective opportunity across social games, online games, virtual worlds, consoles, and mobile games reaches the $2 billion dollar mark,” said Smith.

The growth of the virtual goods market is so fast that it explains why Disney agreed to buy Playdom for as much as $763 million and Electronic Arts agreed to buy Playfish for up to $400 million. Hudson, former vice president of business development at Serious Business, said that it’s clear that virtual goods are impacting businesses across all kinds of media.

Not all virtual goods revenue is coming from Facebook. Virtual goods have blossomed on the iPhone as Apple launched its in-app purchases feature for the iPhone last fall. And virtual goods purchased on connected consoles via Microsoft’s Xbox Live online game service and the Sony PlayStation Network are also growing. Traditional massively multiplayer online games, such as Lord of the Rings Online, are also shifting from paid subscriptions to virtual goods.