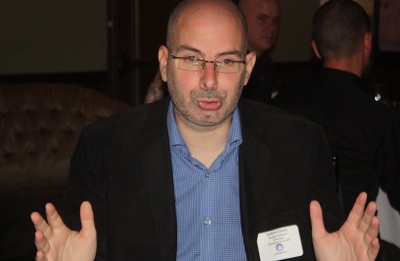 LOS ANGELES — Assassin’s Creed, the popular video game franchise, is about to make the official leap to transmedia. French video game publisher Ubisoft announced today that it will release the Assassin’s Creed movie on May 22, 2015.

The company made the announcement at the Electronic Entertainment Expo (E3) video game trade show today in Los Angeles. The film is being distributed through Fox and will star Michael Fassbender, a star of the film Prometheus. Fassbender is actually involved in the production and creation of the film through his production company DMC Film.

Michael Lesslie, the writer of Prince of Denmark, will write the movie’s script. But other details aren’t being announced.

Cuny is in charge of all content related to Assassin’s Creed, including the film, games, comics, and everything else.

As for Fassbender, Cuny said, “He is a gamer, but he is not hardcore. He doesn’t have the time. But he has played the series and really likes the franchise.”

Assassin’s Creed is a modern-day tale that can also span the centuries. Each installment of the game is rooted in a historical epoch and a particular location. Last year’s Assassins Creed III was set during the American Revolution. But the film evidently won’t be tied to any other Assassin’s Creed game project currently in development.

“We are not approaching it as a movie tied into a game,” Cuny said. “It is a time period everybody knows. It is not 18th century Mongolia.”

Ubisoft is also working on a Splinter Cell movie, but details have not been announced.