Ubisoft is unveiling Quartz, a new platform for players to acquire Digits, the first NFTs (Non-Fungible Tokens) playable in a mainstream game.

The first NFTs will appear in Tom Clancy’s Ghost Recon Breakpoint for the the Windows PC on the Ubisoft Connect platform. Paris-based Ubisoft said the first digital items to use it will be limited edition cosmetic items that will run on energy-efficient blockchain technology. Ubisoft is going to give the first three of these NFTs away to players who have played the game and meet eligibility requirements.

After four years of studying blockchain, the transparent and secure digital ledger, Ubisoft has decided to take the plunge to give fans more control over the items that they buy in games, said Baptiste Chardon, blockchain business and product director at Strategic Innovation Lab at Ubisoft, in an interview with GamesBeat.

Ubisoft, which had $2.5 billion in revenues in its most recent fiscal year, is the biggest game company to embrace NFTs. And that’s in character, as Ubisoft often embraces new technologies and is often the first to launch games on new platforms. The idea of blockchain games has met a lot of resistance, as gamers have been skeptical of cryptocurrency scams, investment hype around NFTs, environmental effects, the complexities of crypto, and the lack of gameplay focus for many of the early blockchain games.

Ubisoft learned about the right approach by working with a lot of the startups in its Entrepreneur Lab and Strategic Innovation Lab in Paris, Chardon said. The company worked with startups like Dapper Labs, Sky Mavis, and Sorare, which have since raised huge funding rounds. And it recently invested in Animoca Brands, which has been bankrolling a lot of blockchain game startups. Ubisoft also joined the Blockchain Game Alliance, which had 10 startups at the outset but now has more than 300 companies.

“You can think of blockchain as a platform on which you can build application. One of those those application has been Bitcoin,” Chardon said. “But there are other applications you may know. So here the idea is to make you understand that blockchain is not Bitcoin, and we are leveraging blockchain in order to to to build the product that we are going to show you. It was the really the opportunity for us to grab all the information and to be aware of what could be done at the time, the opportunities around the technology, but also the limitations.” 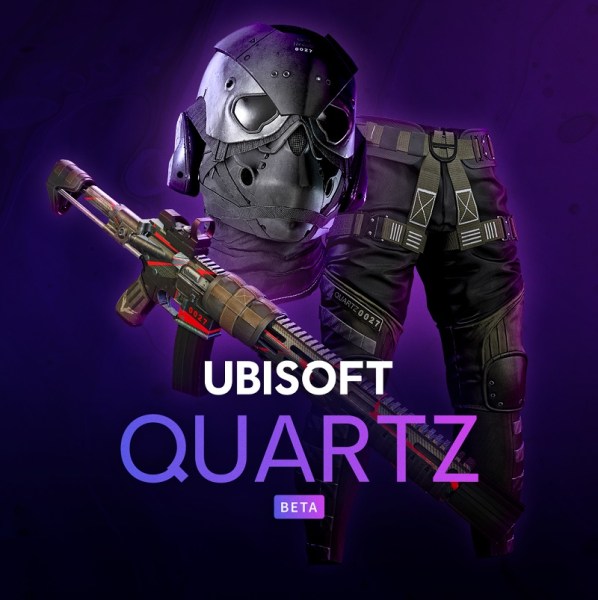 Chardon said that Ubisoft worked on prototypes early on such as Hashcraft, an early exploration of blockchain. It also created its Rabbid tokens to explore NFTs in a fundraiser for UNICEF in 2020. And it partnered with Sorare and the Belgian Pro League to create a fantasy soccer game called the One Shot League.

“The attraction at the time was about creating,” Chardon said. “And the other issue was around the control, and how we could give back control to our players, specifically by enabling peer to peer transfer between them in a secure, easy way and outside of the Ubisoft ecosystem.  We realized it was possible.”

To figure out how to operate blockchain games legally, the team consulted with Ubisoft’s worldwide legal team to vet the rules around Quartz. The company started discussions with regulatory bodies around the world to get a proper picture of where and how it could operate. Where the company goes next will depend on the recommendations from the legal team. 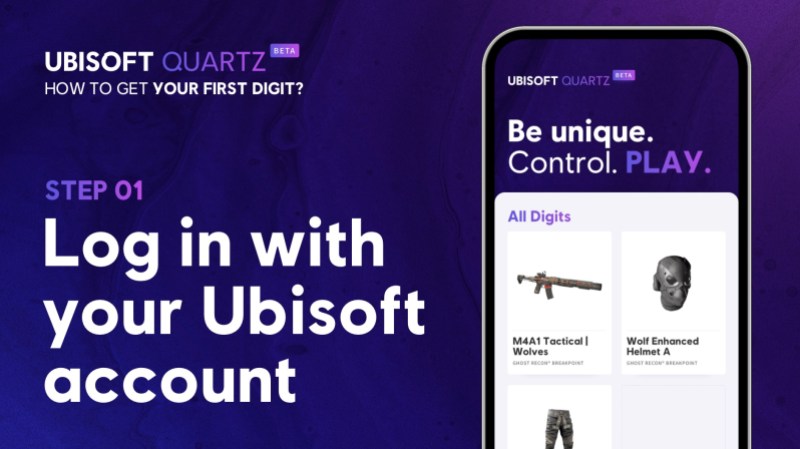 Above: You login to Ubisoft Connect to start using Quartz.

You have to login with your user account on Ubisoft Connect so that the company knows you are in the ecosystem, and it can update your inventory in the game. It knows the duration that you have played the game. Then you have the option to set up a cryptocurrency wallet on Kukai or Temple. You claim your first Digits and you can play with it or put it on sale in a third-party marketplace. Those who buy it on the secondary market still have to meet Ubisoft’s basic requirements of owning an NFT, such as having played the game.

Digits are not earned through gameplay but are free to claim for eligible players on Ubisoft Quartz. They will be released as part of limited Editions, each composed of a fixed number of cosmetic items. This means that players will be able to claim their Digit on the Ubisoft Quartz platform in the limit of their availability and based on their eligibility. If players wish to acquire a Digit that they were not able to buy, either because it is no longer available or because they did not meet the eligibility criteria, they can purchase it from another player on the secondary market, provided they meet Ubisoft Quartz’ eligibility criteria.

This is liberating because you own it. In classic game economies, you can make a purchase in a game. But when you stop playing that game, your investment is lost. In others, you can resell an item within an ecosystem, but you can’t extract your value from that ecosystem. Quartz gives you the ability to own your items and cash out the value when you decide to stop playing. 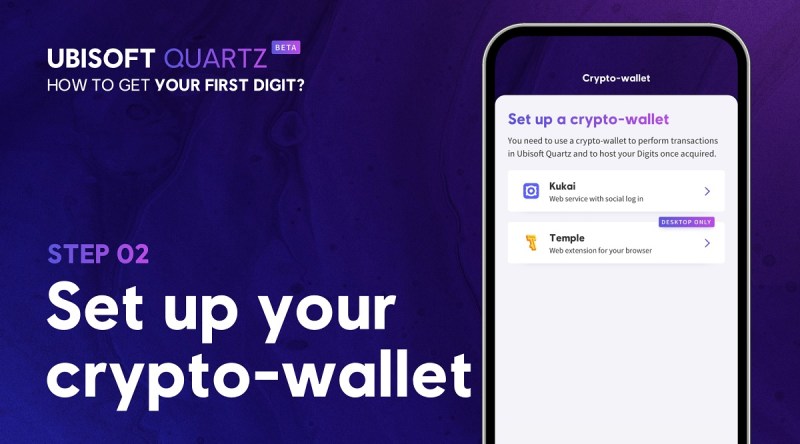 Above: You set up a crypto wallet with Ubisoft Quartz.

“We wanted Quartz to be dedicated to our players and not for speculators,” Genevois said. “Only our players can acquire Digits, and we have set eligibility requirements.”

The Quartz platform and the Digits items use blockchain-based NFTs to authenticate the uniqueness of digital items, and Ubisoft is assigning a serial number to each item to track both its ownership and history, as well as the authenticity.

Launching in beta with Tom Clancy’s Ghost Recon Breakpoint on Ubisoft Connect for Windows PC, Digits will be released as part of limited editions, each composed of a fixed number of cosmetic items. 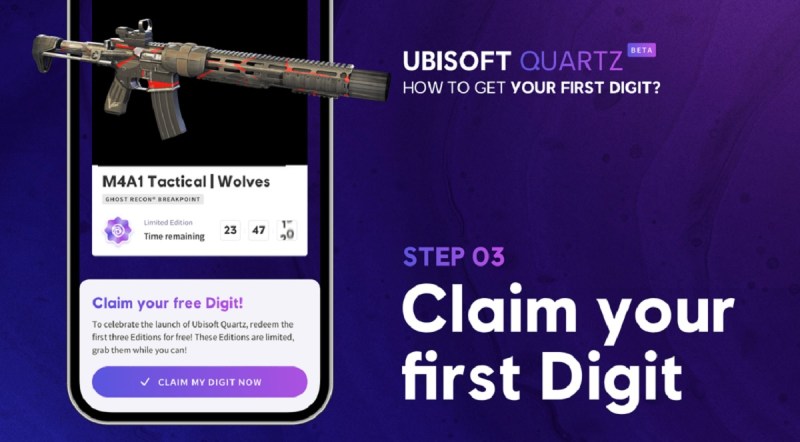 Above: Ubisoft lets you claim your first Digit, or NFT item.

Digits are a new way to experience cosmetic items, combining the fun of playing with triple-A quality assets and the appreciation of owning NFTs that represent unique, collectible pieces of Ubisoft game worlds. Digits are collectible in-game vehicles, weapons, and pieces of equipment that offer players new ways to connect with and enjoy more value from the games they love.

Each Digit is a unique collectible that features its own serial number for others to see in-game, also keeping track of its current and previous owners for years to come, making players an integral part of the game’s history.

Digits are high-quality in-game collectibles with active utility value. As playable cosmetic items, Digits provide players the ability to personalize their experience and complete their missions with style.

Each Digit comes with a certificate of ownership stored on blockchain, a decentralized, community-driven technology independent from Ubisoft, which grants players more control than ever. With Digits, items are no longer bound to a player’s game inventory since they can be put on sale for other eligible players to acquire outside of the Ubisoft ecosystem. 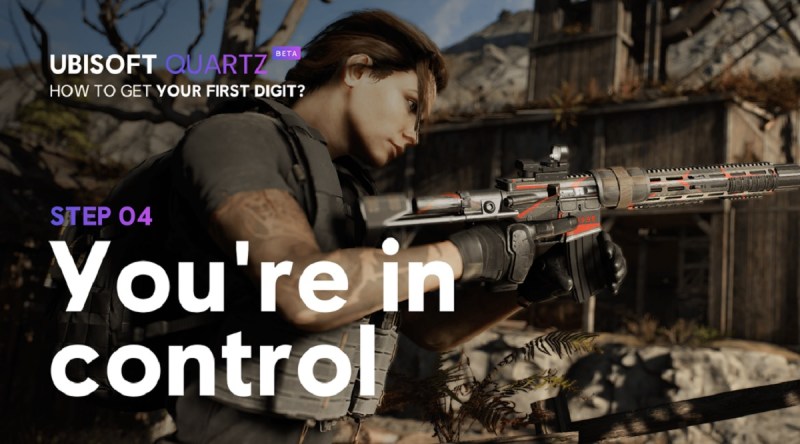 Above: Ubisoft Quartz gives you ownership of your game NFT items.

Players can also sell their Digits to other players using third-party marketplaces, Chardon said. This large-scale experiment is the next step in Ubisoft’s four-year exploration of blockchain technology through in-house research and development and close collaboration with specialists within the startup ecosystem.

“Our long-term efforts led us to understand how blockchain’s decentralized approach could genuinely make players stakeholders of our games, in a way that is also sustainable for our industry, placing back into their hands the value they generate through the time they spend, the items they buy or the content they create online,” said Nicolas Pouard, vice president of Ubisoft’s Strategic Innovation Lab. “Ubisoft Quartz is the first building block in our ambitious vision for developing a true metaverse. And it can’t come to life without overcoming blockchain’s early-form limitations for gaming, including scalability and energy consumption.” 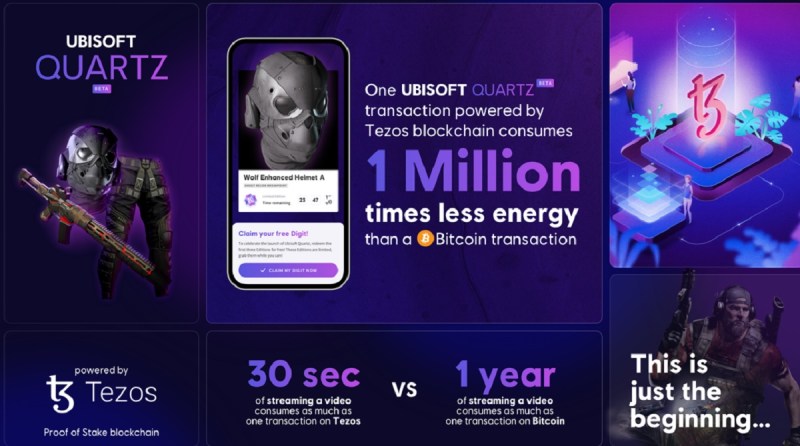 The NFTs are minted on the Tezos blockchain, a partner in Ubisoft’s Innovation Lab. Tezos uses proof-of-stake technology, which does not require a lot of computing power to achieve consensus, or verification of a computing record. As a result, it doesn’t burn a lot of energy or result in high “gas” fees. In fact, Tezos uses a million times less energy than a Bitcoin transaction, Ubisoft said.

“Energy-efficiency is a key requirement to propel blockchain technology into a future where it can be widely used by millions of players. We chose Tezos because of its original proof-of-stake network and its leadership on clean NFTs,” said Genevois. “One transaction on their network uses the same amount of energy as streaming 30 seconds of video, while the previous generation of blockchain networks can consume the same energy required for one year of non-stop streaming. This low carbon footprint means that both our developers and our players can prioritize innovation without compromising sustainability.”

Ubisoft doesn’t want players who trade digits only for their investment value. So the company requires that players log into Ubisoft Connect and play the game for a certain amount of time before being able to earn or trade their Digits.

To ensure that players can use Digits to the full extent of their utility, Ubisoft Quartz will only be available to players that play Tom Clancy’s Ghost Recon Breakpoint on Ubisoft Connect for Windows PC, reach at least the XP Level 5 in the game, and be at least 18 years old. On top of that, the number of Digits of a single edition that a player can own at any time is limited to one.

Ubisoft Quartz will be available in beta starting December 9 at 10 a.m. Pacific time in the U.S., Canada, Spain, France, Germany, Italy, Belgium, Australia, and Brazil. The experiment will kick off with three drops of free Digits on December 9, 12, and 15, to reward the early adopters among players.

Digits can be claimed on the Ubisoft Quartz platform and played with in Ghost Recon Breakpoint. Other drops are planned for early 2022, and more details will be shared at a later date.

“This is just the beginning,” Chardon said. “This is not a one-time project. It’s part of our global Ubisoft strategy to try and test new stuff.”