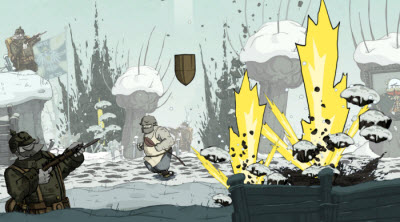 Above: Valiant Hearts: The Great War

The discontinuity of Valiant Hearts: The Great War is obvious at first glance. Its comic book art style is happy, but the subject matter of the Great War is clearly somber. But the French game publisher, known for taking risks with original content, is announcing the game today as a multiplatform console and PC title for 2014.

Ubisoft unveiled the game at its recent Digital Days event. The downloadable title follows the story of four people and a dog whose paths cross during the war to end all wars. It is a story-based game about broken love in a world torn apart. All of the characters will try to survive the horror of the trenches while following a faithful canine companion. The characters are inextricably drawn together over the course of the game. The themes involve friendship, love, sacrifice, and tragedy. If the characters survive, you can help a German soldier find his love.

In the beginning, you play a French cook who has been captured by the Germans. As the Germans drink beer with steins, they make for a comic sight. But then an artillery strike takes them by surprise and wipes them out. Everyone except the cook and a dog are killed. While the plot is quite dark, the animation is cute and funny. You solve simple puzzles to escape from tight spots and navigate through grim battlefields. The title is built with the UbiArt Framework, which takes concept art and turns it into a playable animated scene. The color palette ranges from dank trenches to green forests. 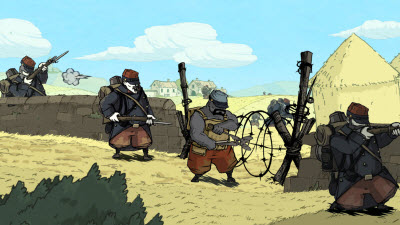 Above: Valiant Hearts: The Great War

“The art director started drawing the characters a few years ago,” said Yoan Fanise (pictured left), the director of the game at Ubisoft, in an interview with GamesBeat. “It was a lighthearted style. The game is like a roller coaster, with funny and sad moments. We really play with your emotions. We think it makes the subject matter more accessible. It bring a serious subject to a new audience.”

It’s not a linear story. It has flashbacks, and the story is complicated. There are links between the characters that you discover over time, said Kevin Irwin (pictured right), a marketing specialist at Ubisoft Montreal.

“It covers the entirety of the war,” said Fanise, who noted that World War I saw the origin of tanks, airplanes, land mines, and chemical warfare. “It’s not a war game. It’s a game about people and their experience of the war.”

About 10 people at Ubisoft Montpellier are working on the title. The team has worked on others such as Beyond Good & Evil, Rayman Origins, and Rayman Legends. The game will appear on the PlayStation 4, Xbox One, PlayStation, Xbox 360, and the PC.