A while ago, Ubisoft focused on hardcore PC and console games while Gameloft, which shared a family connection, focused on mobile games. But the companies are separate entities, and as the world goes digital, Ubisoft is moving toward smartphone gaming. At its recent Digital Day event, we got a look at a bunch of the company’s entries in the mobile space. The very fact that these games were on display and are being made at all shows the transformational effect that smartphones and tablets are having on gaming.

Here’s the rundown of the mobile games coming from Ubisoft:

In this game (artwork pictured at top), you become an angry, almighty god who can smite arrogant humans and prevent them from building the tower of Babel. You do so by hurling bolts of lightning, summoning earthquakes, and unleashing vengeful floods. The game has 3D graphics and lets you access twice as many powers as the original Babel Rising game. You can execute elemental attacks based on fire, water, earth, and air. You can also collect Babel currency to buy scrolls, passive powers, and other in-app goods. The overall campaign has 15 missions where your goal is to stop humans from building towers of Babel at different points in history. You have to deal with protective priests who shield workers from spells and siege towers that help humans access upper levels faster. 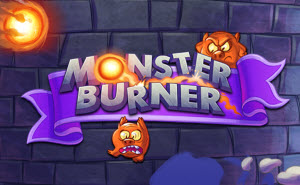 This free-to-play game has a frantic arcade pace with strategic puzzles. You protect your wealth by blasting hordes of monsters with spells. You can collect coins and upgrade to more powerful spells, which will eliminate more dangerous monsters. Each game lasts just minutes. The monsters attack your castles so they can steal your gold, you have to be careful not to hit hysterical stray princesses who run onto the battlefield, and a genie offers you advice. A new level is available each week, and you can compare your scores against a friend’s. 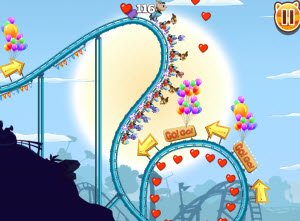 Nutty Fluffies uses physics and a touch-based interface to create crazy roller-coaster rides. You can race and hone your skills in 26 tricky roller coasters, from classic wooden coasters to steel speed demons. You control them with touches that manipulate your accelerator and brakes. There are four different types of coasters. The stuffed animals come out of their midway booths and take rides. You can use rockets, jump jets, and magnets. You earn hearts and coins, run through loops, and jump across huge divides. You can use the hearts and coins to build longer trains with more carts or unlock new tracks. 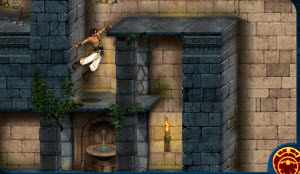 The old side-scrolling Prince of Persia game is a huge classic for adventure fans. Now you have to battle your way and perform death-defying stunts using touchscreen controls. You move from dark dungeons to the beautiful palace tower. You can play in normal mode or race against time in a Time Attack, where you have only 60 minutes to beat the game. In survival mode, you have to complete the game in the same time frame without dying. You can use a “revive” feature to instantly turn back time, and you can follow a butterfly for assistance. 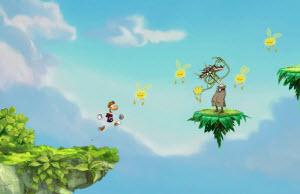 The familiar platforming hero Rayman makes the jump to smartphone and tablet gaming with this release. It uses the same UbiArt framework engine that was used to create the beautiful side-scroller Rayman Origins for the consoles last year. You run sideways and jump like crazy, unlocking powers and discovering cool worlds and hidden surprises. The game uses touch controls and enables you to unlock wallpapers. It supports cloud saves on iOS and Game Center leaderboards.