This interview contains some plot spoilers for Watch Dogs.

The story behind Watch Dogs has been vague so far. In demos, Ubisoft has shown how hacker Aiden Pearce can control a smart city by hacking into it with his smartphone. But who is Aiden Pearce? Why is he so mad? Who is he after? And who is after him? And just who is the good guy in this vigilante story?

Kevin Shortt, the lead writer for Watch Dogs at the French game publisher, can finally talk about some of these details. While Ubisoft has shown off the cool technology in the game and the beauty of its open world, it hasn’t revealed too much of the story until now. We still don’t know a lot about the plot twists, but now we have a much better feel for what drives its main character.

I interviewed Shortt after a couple of hours playing the game at a preview event in San Francisco. He’s been locked up for five-and-a-half years, working on the story and the little details that make the world of Watch Dogs believable. 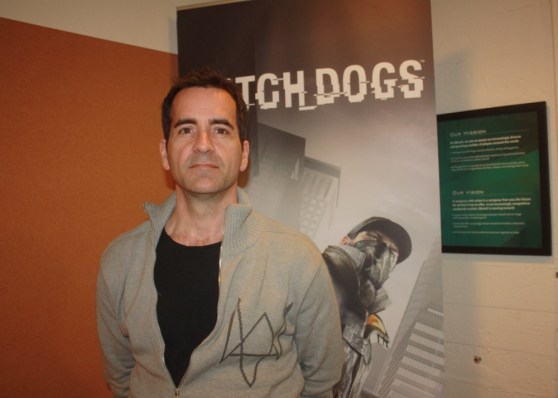 GamesBeat: In past presentations, you guys haven’t made many disclosures about the story. Now you’re describing it more. What would you say about how this story matches up with what’s going on in the game?

Kevin Shortt: It starts with what we’ve always talked about. Here’s this modern-day vigilante who’s tormented by guilt over the death of his niece. He’s trying to find the people responsible for that. At the same time, he’s a bit overprotective, obsessively so, about his sister and nephew.

In amid of all this, while he’s trying to find these people, an old mentor comes back into the picture, a guy named Damian Brinks. You see him at the very beginning of the game. He insists that they work together again. Aiden rejects him, will not work with him. So they immediately have a head to head, and that becomes something Pearce is going to have to deal with. He hacks into ctOS, tries to take more control of ctOS, so he can turn the city against Damian and try to stop him. But as he does that, he starts to realize there’s something more going on inside ctOS. There are secrets and lies interwoven in all of this. His personal story, while wrapped up in the whole story, starts opening up into something bigger and more sinister. 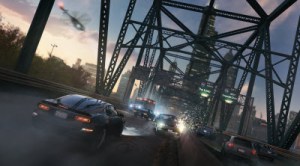 GamesBeat: Does Aiden face multiple threats, then? Or is he sort of uncovering a single enemy behind all of this?

GamesBeat: In the pure demos before, it seemed like Aiden was all-powerful. But he’s actually up against people who are more powerful?

Shortt: Damian is probably the superior hacker, in a way. He was Aiden’s mentor. That’s how Aiden learned to hack, from him. So he’s going to be formidable. A lot of people you’ll meet are going to challenge Pearce. Some are better hackers who are going to help him, but some are also adversaries he’ll have to deal with.

GamesBeat: Is the campaign linear and long, or does it have other t–

Shortt: Does it branch off? We talked about that. Do we want to have a story that branches based on player action? We decided, no, we don’t want to do that. I’m not a fan of the idea. When you do those types of stories, you have to loosen the story up to accommodate different choices. When you do that, you end up with a weaker story.

Then you get to the end of the game, and you have maybe three or four choices of endings. What ends up happening is that then I go online and see what the other endings were. Okay, cool, those were the other endings that could have happened. You and I talk about the game, and where does the discussion start? What ending did you get? Oh, how did you get to that ending? That’s not the discussion we want players to have.

We want players to have a singular journey, the same experience, so that they can have a discussion—It’s like when you go to the movies. You and I go to the movies and see the same movie, but we come out with different opinions, and we can have a discussion about that. Oh, you thought this guy was behind all of it? No, I didn’t think so. Here’s the conspiracy we think is going on. You get to have that discussion because we all end up at the same place and come away with the same events we can interpret how we want to.

Where the player expression comes in is in the way they use the tools they have, the weapons they have, how they hack. It’s also in the way you interpret the things that you see, like the profiler. Every person has a profile that you can scan and see. That’s all systemically generated.

GamesBeat: You have your army of writers creating those little profiles.

Shortt: Exactly. We had a lot of writers who were very busy. The thing about that is, they aren’t unique profiles. Because the city is so big, and we wanted to make sure those profiles are just perpetual – they go on and on – we needed to make sure every profile would be unique. To do that, we had to run off a system. I don’t even know myself how a profile is going to show up in the game. What’s great about that is that it constantly surprises even me. 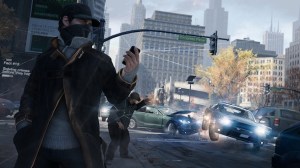 Above: Watch Dogs is one of 2014’s most-anticipated games.

GamesBeat: It’s all procedural, then, mixing together different elements?

Shortt: Right. The way they look, certain facts about them. When you hack them, you hear phone calls. Again, we don’t know how those will come up, exactly. What’s cool about that is, you are then deciding who that NPC is on your own. You’re bringing a third element. We give you how they look and a couple of facts. You bring the third element – here’s their life. I’ve decided who they are, interpreted who they are.

GamesBeat: Do some of these random people lead you into parts of the campaign? One thing I noticed was that when I would finish a mission in the campaign, I wouldn’t immediately just go out to the map and see the next campaign point. It seems like I might have to wait a while or look for where to go next.

Shortt: There shouldn’t be too much of that. That may just be a matter of tuning. There’s not much delay between finishing one mission and the next point coming up, inviting you to go there.

GamesBeat: So it is directed in that way?

Shortt: Yes. We wanted to make sure that the player always knows where the main story is going next. It’s up to them when they want to go there, but we want to make sure that they never feel as if they don’t know where to go. They may want to try out some of their hacking skills somewhere else. They might want to do mini-games. They might want to play chess or do some of the digital trips. They can try out many things on their own. We want to encourage that, letting players explore the world.

Sometimes it will just be a phone call that’s kind of curious or interesting. Other times it could be a text message where you realize someone might get killed or robbed. It becomes an opportunity to step in as a vigilante and try to stop that from happening. In several instances, it’ll lead to gameplay for the player.

GamesBeat: Does the story make you walk this line as far as whether you want to be a good guy or a bad guy as a vigilante?