Ubisoft launched its Rocksmith guitar-learning game in 2011, just as the faux guitar video game craze started by Guitar Hero seemed be at its end. But Rocksmith, which combined a Guitar Hero-style video game with a real guitar, sold more than 1.5 million units. That was enough to justify the sequel, Rocksmith 2014, which debuts on Oct. 22. Ubisoft’s San Francisco studio has refashioned the game to make it much easier to learn how to play a real guitar, said Laurent Detoc, president of Ubisoft North America, in an interview with GamesBeat.

Detoc noted that an independent national study by Research Strategy Group found that Rocksmith is the “fastest way to learn guitar,” partly because it tells you what you did wrong in a song and allows you to learn the way you want to learn. But the game also has some entertaining mini games that are much more like traditional gameplay mechanics than boring guitar lessons. Detoc talked about balancing both fun and learning in the new version. Here’s an edited transcript of our conversation. 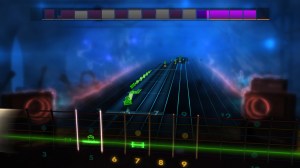 GamesBeat: What’s your view of the state of the music market right now?

Laurent Detoc: It’s in need of a rebirth, so to speak. The reason we got into Rocksmith to begin with was because, seeing all of these instruments made of plastic being played, and having a few guitar players among us, we were thinking about the power of this. What if you could just hook up a real guitar and have people make better use of their time? Not that having fun with a plastic guitar isn’t a good use of your time, but you can make better use of it if you can have a fun product that also leaves you with a real-life benefit. You’ve learned how to play guitar or improved the skills you already have.

So the state of the music market is that it used to be enormous and then it went away. People decided that, beyond having fun with plastic toys, there wasn’t enough there. Yet the appetite for being a rock star exists. It’s always been there. That’s why Guitar Hero and Rock Band did well. I would hope that the improvements that we keep making to Rocksmith – both as a brand as a method for helping people learn the instrument – can take us to a point where we’ll be the natural evolution of those games on the same scale. We’ll still cater to that market of people who want to be rock stars.

We did well last time. We sold 1.5 million units of Rocksmith. It’s not like it didn’t do well. It’s a solid-selling product, solid enough that we know we can continue to make iterations of the game. That’s what Rocksmith 2014 is about. A lot of improvements have gone toward making what the game was intended to be — something that helps you learn. We were worried about that at the beginning. It was like, “You can’t say it’s a learning tool.” Because we didn’t want to pull people away from thinking that this was going to be fun, just like the other music games. In the end, though, 90 percent of these players have been saying, “No, it’s an awesome way to learn.” 95 percent have been saying, “I really did learn something.” 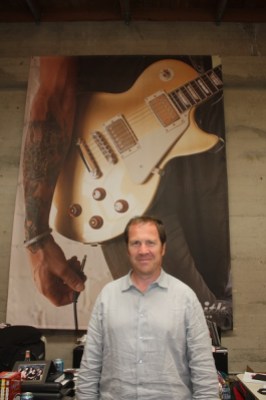 GamesBeat: So the learning market actually could be the bigger market?

Detoc: The learning market is the market. If you make it fun enough, learning becomes interesting, as opposed to being a chore. I have two kids who both play piano. There are some interesting moments in how they’ve been progressing that define the difference between a chore and having fun. It’s still the same piano with the same lessons and the same perseverance and practice that’s required. There’s no mystery. If you don’t practice you don’t get better, whether you play the piano or a plastic guitar or a real guitar. It goes for anything. But how do you make it painless, so what you’re doing is fun?

I can see little moments with the piano. My son started to toy around with the piano, and the next thing I know he’s creating an entire sequence. He kept playing it and playing it and playing it, and at some point his teacher is going to say, “Let’s try to make it into a real piece.” That’s maybe two years ago. Now he’s a nine-year-old kid who’s been composing his own music. Of course, it’s a nine-year-old’s piano piece – nothing to go on the radio with – but he practices and he plays and he feels really good when he does that. Playing that piece and developing it isn’t work for him.

Likewise, when you play the guitar more and more and see and hear yourself play along with a four-minute piece and it sounds good, the energy that comes out of that is fabulous. We see that with the 60-day challenge in Rocksmith. We take people with no particular knowledge of the guitar and say, “Bear with us. It’s not that complicated. Play an hour a day for 60 days.” After 60 days, we’ve seen some amazing videos. With a little bit of commitment, every person who’s done that challenge and stuck to it has made enormous progress. You can see them just light up as they go. 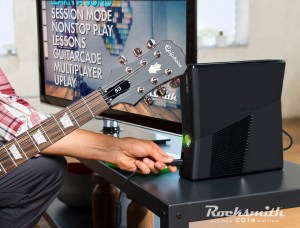 Above: You supply the guitar. Then plug it into your game console.

GamesBeat: When did you do that challenge? Was it over the first year?

Detoc: Yeah, we just did that this year. We started some of them with the first Rocksmith game, but now we’ve switched them to Rocksmith 2014. It was interesting. The people in the early rounds were commenting on how much better the new product was. They were learning faster. You can go back to a specific section that you want to improve and practice. And we don’t make it painful for you to do that.

GamesBeat: Is there a possibility that you might do your own music social network? Smule recently launched their network, Smule Nation. I don’t know if that’s something you guys have thought about.

Detoc: The level of strenuousness that we need to have is very important as far as maintaining the credibility of the product. If we do create a network of some sort, it’ll still have to be based on the methodology of how people learn through Rocksmith. That needs to stay in the background. Of course, because the world is more connected every day, we have people learning from one another. They’re posting their own music and others try to reproduce it. Whether we could build on that is a question for other people than me.

When you see how the songs are being created and adapted for easier learning—There’s a team of people inside the Rocksmith team that tries to bring the songs to a level where they’re easier learn. Could we eventually give those tools to the community, so that they can do that with the songs that they create? Again, so long as it stays credible, I think that would be okay. But we’re not quite there yet.