Ubisoft, the maker of games like Assassin’s Creed, and healthtech startup Amblyotech have teamed up to create Dig Rush, a therapeutic video game that can help treat a condition known as “lazy eye.” With “lazy eye,” patients see out of one eye instead of two.

The title from the French game publisher is part of a trend of “games for health,” or those that can be used to treat health problems, and it is being unveiled today at the Game Developers Conference in San Francisco. Its creators say that the treatment is 90 percent effective, and it takes only four to six weeks to retrain your brain to use both eyes instead of one eye, based on clinical testing.

Amblyopia, or “lazy eye,” is where one eye dominates a person’s vision to the point where they don’t have much depth perception and see life effectively through a single eye. The condition affects 3 percent of the population, or about 9 million people in the U.S.

“You know us for developing triple-A games, but we’re also producing engaging games for other purposes,” said Mathieu Ferland, the senior producer at Uibisoft’s studio in Montreal, Canada. “This game is a good demonstration that the positive impact video game technology can have on our society.”

Dig Rush was developed with researchers at McGill University in Montreal, and with partner Amblyotech in Atlanta, Ga. The latter company is in charge of applications to the Food and Drug Administration for federal approval of the game as a treatment.

“The only way to play the game is to force the patient to use binocular vision, or two eyes,” Ferland told GamesBeat. 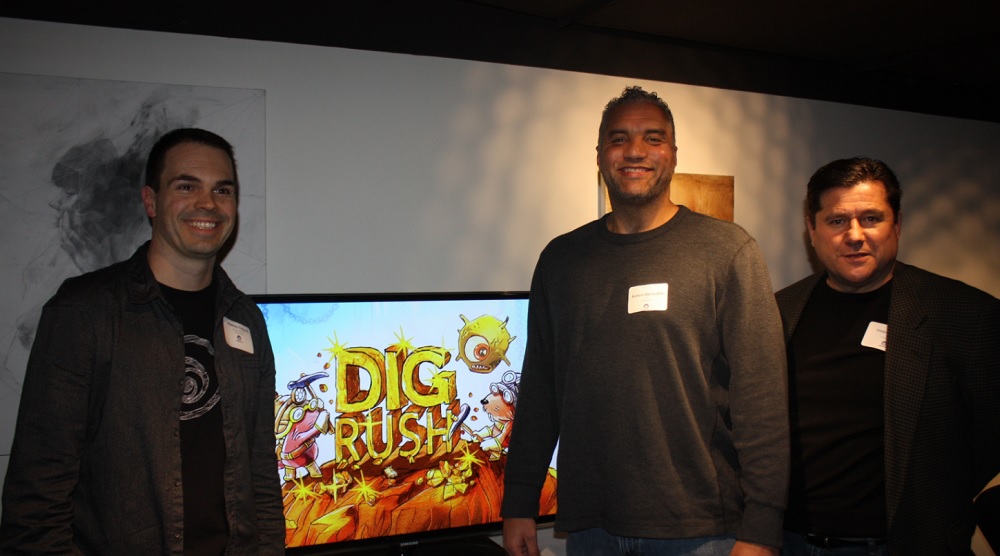 Above: Dig Rush creators Mathieu Ferland of Ubisoft and Robert Derricotte and Joseph Koziak of Amblyotech.

“With this condition, the brain suppresses everything from one eye, and you have no depth of field perception,” he said. “We fix that, using both eyes in order to be able to regain the images coming out of the suppressed eye. Your 3D acuity is regained.”

He said the treatment is effective compared to patching, where a patient covers a stronger eye up with a patch for six months to four years. Patching doesn’t work on older patients, and it doesn’t retrain the brain as well as the video game can, Derricotte said.

“We’re very excited about this,” Derricotte said. “This is a game changer. Doctors have been patching patients for over 200 years.”

Dig Rush uses inventions patented by McGill University researchers Robert Hess, Benjamin Thompson, Behzad Mansouri, Jeremy Cooperstock, Long To, and Jeff Blum. They licensed the technology to Amblyotech, and Ubisoft is applying its skills with gameplay to create an entertaining way to implement the treatment.

Ubisoft has been working on the title for a year. Joseph Koziak, the CEO of Amblyotech, said in an interview, “Quite frankly, this is a drug. We are making that statement. And if you say that, you have to get FDA approval. It’s not just a game. The game part is for your attention. The therapy is the contrast levels that occur throughout the hours of play. It changes the balance so that you no longer have a dominant eye.”

“We think we can create a hybrid industry between gaming and the life sciences,” said Koziak. “The tablet is the syringe of the future. You can use an iPad visual display to administer a drug to a patient. Other medical conditions of the future can be treated through a display.”

Other researchers have been looking at the problem. Diplopia is working on a demo for treating “lazy eye” through Oculus Rift virtual reality goggles. Koziak and Derricotte are trying to create a whole company around novel medical treatments using smartphones and tablets.

“McGill University has a proud history of innovation and product development in numerous fields, especially life sciences,” said Michèle Beaulieu, the associate director of the Invention Development and Entrepreneurship Assistance Team in the Office of Innovation and Partnership of McGill University, in a statement. “It is our pleasure to see one of our invented technologies take the next step to commercialization.”