Last month, Electronic Arts and Mythic Entertainment released Ultima Forever: Quest for the Avatar on the App Store. It’s a follow-up to the ’80s game Ultima IV: Quest of the Avatar, but Mythic has made a few changes, including swapping out Lord British for Lady British. As much as that sounds like a gender-smart move, some players have been wondering why they can’t play as a female fighter — only a female mage.

Ultima Forever touts itself as a game of choice. “There is no wrong answer,” it tells you after every major dialogue decision, which nets points in different virtues. So why give players a whopping 10 builds for male fighters and absolutely no female ones?

“Ultimately, we had to delay the debut of the female fighter due to resource constraints,” Carrie Gouskos, the senior producer on Ultima Forever, told GamesBeat. “Early on in development, we had decided to take the eight careers of Ultima and divide them into four women and four men — mostly because of the challenges of creating hundreds of sets of armor that would be applicable for both genders for all eight classes.” In other words, the fighter and mage were initially only male.

“We were also originally planning to release the druid at launch and ranger shortly after — both female — but when resource constraints made that impossible, we chose to add a female mage instead.”

The mage was easier to repurpose because “there were very minor art differences between the male and female mages,” she said. But instead of rushing to release the female fighter, whom Gouskos said didn’t look right in some of the existing armor designs (such as kilts), the team decided to take extra time to create more distinct looks for each gender.

The female mage may have been a product of necessity — it was less ambitious to launch two classes with different genders than all eight classes (four male and four female) at once — but it worked out better for players. “We will be launching the female fighter class in our next game update,” Gouskos said. It’s tentatively set for mid-September and “will also include functionality that will allow players to switch their gender” — as well as change their appearance — “if they would like to do so.”

Mythic also plans to introduce equal genders for the other archetypes (including the ranger and druid), hopefully “without killing our art budget,” said Gouskos.

“Because we expect players to invest hundreds of hours into their characters, we are trying to figure out a way to let players enjoy the six remaining classes without simply requiring them to start over as brand new characters,” she said. “But that’s still something the designers are exploring. Either way, moving forward, all class options will be available to either gender.”

The body of a fighter

Since the fighter was originally only going to be male, the team at Mythic created appropriate armor, which fits broad shoulders and huge arms. 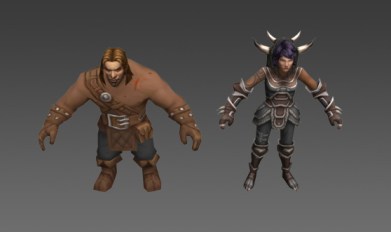 “This was done because exaggerations are easier to read at the size and perspective of the game — and because the style of the game is more characterful and less ‘realistic,'” said Gouskos. The bulky garb is not going to look good on a female. Fighters also wear a lot of tartans and shirtless pieces, which wouldn’t work on the opposite gender for obvious reasons.

“We wanted the female fighter — who originally was going to be the paladin — to look like a female but also be wearing really badass armor and have a huge sword,” she said. “I remember distinctly the moment when Tina, who is in charge of marketing, and I were shouting at some of the early mockups, ‘Make the sword bigger!’ I know it’s not ideal to have not had her available at launch, but the wait will definitely be worth it.”

Gender may be an important issue, but it doesn’t influence the story. “Ultima Forever is reflective of the player’s choices and actions; it doesn’t matter what gender you are so much as the sort of person you are,” said Gouskos.

The producer doesn’t believe that all role-playing games — or any genre, for that matter — need to offer gender options. Gouskos said it shouldn’t be a requirement even though she’s personally very conscious of the feature. 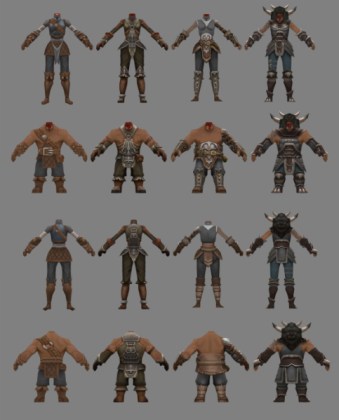 Above: Variants of armor for men and women.

“Sometimes it’s important to the story that the character be a certain gender or ethnicity,” she said. “And even when that’s not the issue, I understand, as a developer, to be deeply empathetic to the resource constraints of building art and audio and the impact that has on the game’s size.

“My stance has always been to pick the character I most like the look of — if I don’t pick one that I think looks like me — and interestingly enough, my main character is the [dark-haired female] fighter.”

Ultima Forever doesn’t ignore the player’s selection of gender and then write a male hero into its story anyway, like in other mobile fantasy RPGs (Dungeon Hunter 4 comes to mind). Instead, it uses neutral words like “hero,” “stranger” (the hero is native to Earth, not Britannia), and “Avatar,” which Mythic borrowed from the original series.

The choices that players make are important. “The most apparent [example] is at character creation. If you choose to take the personality quiz — you will be assigned an appearance and gender, lucky colors, and a personality based on your results. If you don’t like the outcome, you can choose to override your physical appearance, of course.”

Dialogue decisions, along with the way you play with others in the cooperative dungeons, also influence the development of your character through virtue rewards.

“Virtues are the great legacy of Ultima, and while choosing one over another is intended to be challenging — pushing you to think about yourself and the kind of person you want to be, there is no wrong or ‘bad’ answer,” said Gouskos. “Over time, your behaviors and choices ‘level’ your different virtues, and this has a wider-reaching impact across the game.”

Trading Lord British for Lady British seems like a bold move, but the reason is much simpler: Mythic doesn’t have the legal rights to use the Lord British name — that still belongs to Ultima creator Richard Garriott. 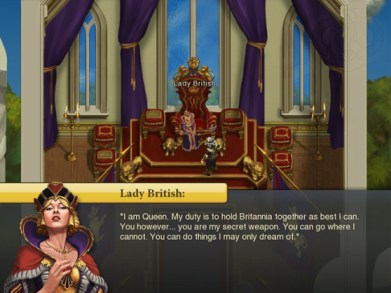 “However, our lead designer Kate Flack is female and British, so she’s known as Lady British around the team,” said Gouskos. “It was also a great option for us to be able to create a new storyline by making Lady British Lord British’s daughter.

“The events of this game are slightly later — 21 years to be precise — than the original Ultima IV, but you’ll see some familiar faces from the original game,” she said. “And while we don’t reference Lord British directly, if you know your Richard Garriott history, there are some cheeky references to him throughout the game which he seems to have enjoyed quite a lot.”

So what does the one true king of Britannia think about all this?

“By all means, I am glad they did not give me a wife not of my picking!” Garriott told GamesBeat. “But by the way, I also have my own daughter, whose name is Kinga! I suppose I am glad to know she will inherit the Kingdom of Old Britannia. Fear not — Lord British is returning in New Britannia via Shroud of the Avatar!”