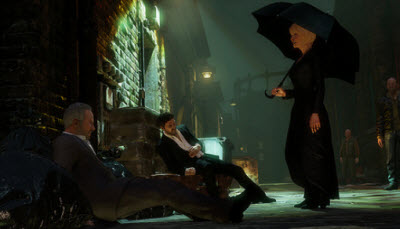 In 2006, the first game, Uncharted: Drake’s Fortune, introduced treasure hunters Nathan Drake and Victor “Sully” Sullivan as they seek the lost city of El Dorado. They are accompanied by journalist Elena Fisher and run into rival pirates as they seek their fortunes. The title sold reasonably well with the launch of the PlayStation 3, but it was overshadowed by Resistance: Fall of Man and it was mocked as “Dude Raider,” or a male version of the Lara Croft Tomb Raider series. It earned an average 88 out of 100 rating on Metacritic, which aggregates review scores.

In 2008, Uncharted 2: Among Thieves debuted as a masterpiece in game play and storytelling. In search of the lost valley of Shambala, Drake is rejoined by his pal Sully and Elena as well as the new character Chloe Frazer, a thief. The two women are fierce fighters who love Drake but don’t want to admit it and compete for his attention. Naughty Dog pulled everything off so well that the game was almost universally acclaimed as the best of the year. We named it the best game of 2008 and it earned an average rating of 96 out of 100 from Metacritic.

In the new game, we meet a new and intriguing foe, Katherine Marlowe, who has some history with both Drake and Sully. Drake sets her up right when he cracks, “Aren’t you afraid you’ll melt?,” when she closes her umbrella (a reference to the cackling Wicked Witch of the East from the Wizard of Oz). Marlowe cackles and dishes venom right back at Drake. Her assistant Talbot is a model in polite and cold-blooded efficiency.

While Marlowe plays a good villain, the most interesting character this time around is Drake himself. He is always striving upward, like the inscription on the ring, which translates to, “Great things from small beginnings.” His story starts as a treasure hunt, but it becomes more than that, as he has to deal with inner demons and these damn spiders everywhere. 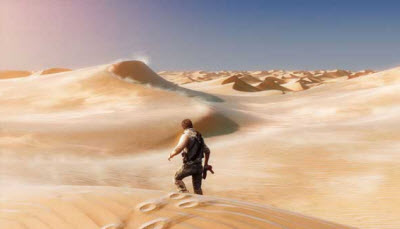 Uncharted 3 becomes more epic as its story takes historical and literary turns. Like in the Da Vinci Code, the history of Drake’s travels intersects with Sir Francis Drake’s missing months from his diary. Many have tried to figure out what Drake did during this time, and T. E. Lawrence, the historical figure from the Arab rising and a great archaeologist as well, was among them. Drake finds out that Lawrence was searching for a lost city known as The Atlantis of the Sands, also known as Iram of the Pillars or Ubar — an ancient city destroyed by a natural disaster. Drake’s discoveries on top of what Lawrence knew lead him to France, Syria, and modern-day Yemen. There, he confronts the Rub’ al Khali, the giant desert that appears at the beginning of the game.

It is within the Rub’ al Khali that Drake has his brush with inner madness. As Drake wanders the desert, he hears the villain Marlowe recite lines from T.S. Eliot’s classic poem, The Wasteland. “What are the roots that clutch, what branches grow out of this stony rubbish?” It closes with, “I will show you fear in a handful of dust.”

For me, the passage works particularly well. The Wasteland is artfully woven into three of my favorite works of art of all time: Apocalypse Now, Stephen King’s The Dark Tower series, and now Uncharted 3. The recitation of this passage within a part of the game where nothing is really happening is a creative risk. And it works. It is one of a number of ways — like the use of flashbacks and flash forwards — that the creative team uses to keep things dramatic and fresh for the veteran player. 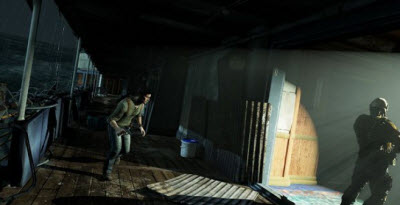 Game play is what counts

A game is not a travel video or a college English course. Rather, it lives or dies on its game play. Fortunately, Uncharted 3 combines a winning formula from the past. It has cool places to explore, secret passages to find, puzzles to solve, fistfights to win, and lots of gun battles. Each of these activities has to be fun, and they are.

In this game, you don’t always run and gun. You can use cover and stealth to move around the flanks of enemies and take them by surprise. If you sneak up behind an enemy, you tap the square box on the controller. That initiates a melee kill animation where Drake grabs the enemy and silently dispatches him. That square box is used for many different kinds of take-down animations, including slapping a bottle against someone’s head. In the middle of fistfights, you have to mash buttons, using triangles or circles as appropriate to bring down an enemy and initiate a very movie-like ending to the fistfight, like when Drake takes out a monster of a thug using the porcelain cover to a toilet. The thug naturally falls face first into the toilet. In another finishing move, Drake can pull a pin out of a grenade on a rival’s belt and then kick him away so that the enemy blows up.

Drake as a character fits in with the way you play the game. He isn’t a superhero martial artist who can run up walls. He wobbles and gasps as he climbs things, and he even jokes in a self-referential way, as if he realizes he’s inside a game. Drake is much more like an ordinary person thrown into breathtaking landscapes and impossible situations where there is no escape. He can’t stand in the open and shoot. He has to hide in the shadows and use a ruse to defeat someone.

The third-person gun play is a lot of fun at its core. You can hide behind a wall and blindly toss a grenade or shoot. Most enemies are tough enough where you have to shoot them in the head or a couple of times in the body to take them down. You only get one small weapon, a big one, and a couple of grenades at any time. So you have to constantly pick up ammo or other weapons from the enemies you dispatch. Each weapon feels good when you aim, shoot and take down enemies.

The puzzles are mind benders that force the player to consult Drake’s journal or others he finds along the way for clues. You have to solve these puzzles that are literally built into the environment to get around barriers, open secret passages, or simply scale buildings. The puzzles are not easy, but they are not so difficult that you will give up in frustration, as happens in many games.

As with Uncharted 2, much of the game play is physics-based, where you interact with the environment in a real way. In this game, one new feature is you can shoot at pillars and cause them to collapse, causing a whole building or roof to cave in.

Once in a while, the developers throw an exceedingly difficult challenge at you, where they throw a cocktail at you that can only be done in a game like Uncharted. In one level on the water, Drake has to move from guard to the next by swimming from one small barge to the next without being seen. If he is discovered to early, he gets caught in a deadly cross-fire. So the selection of the enemies to kill and which order to do it in is a puzzle in itself. 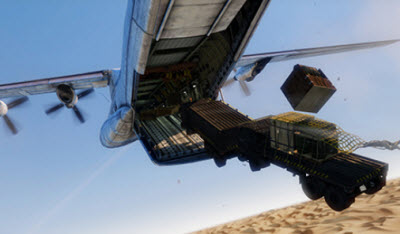 When he gets up on a barge and shoots, he has to take into account the motion of the water, which has the effect of throwing off your aim as you shoot. In that respect, it reminds me of Uncharted 2, when you have to deal with the physics of the train you’re riding as you try to take aim at enemies. This kind of game play and graphics combination takes advantage of the PlayStation 3’s Cell microprocessor, pretty much to the maximum degree possible.

For the briefest of moments, you also have to try to shoot other rivals on a huge cargo plane, even as the back of the cargo plane opens and starts sucking everyone out. Drake has to dodge big crates that are sliding off the plane even as he tries to shoot at the enemies. The scene is a tour de force in graphics and physics.

Another cool scene, after the barge level, occurs when you’re scaling the side of a giant wrecked cargo ship, moving from one beam to the next, as enemies try to shoot down at you. You shoot upward and hit someone and they plummet to the ground right past year. Later, you have to fight on the side of a capsized ship. There, you have to avoid a flood of water as crazed enemies pursue you. Your horizontal axis turns vertical, as you have to hang on to a side of an open door to keep from falling down a corridor.

Only Naughty Dog considers staging gun battles in such places. They are defining moments in a game that really delivers a game-play experience that is like no other.