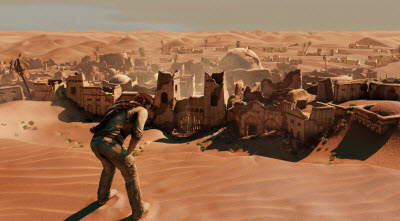 But there are plenty of annoying parts. One of them is that Drake is unbelievably indestructible for an everyday hero. His head gets slammed into a urinal: Drake suffers a slight bruise and a headache and is ready to brawl once again. He falls down as a floor collapses quite a few times. Then he gets up and shakes himself off. And he wanders aimlessly for days and nearly dies from lack of water, only to get a little bit of it and jump right back into a firefight. That’s fine for a video game. But it diminishes the realism around Drake’s everyman character. It’s like he goes from desert dehydration to Super Bowl readiness in an instant.

The No. 1 trade-off of all of the graphical beauty is speed and freedom of movement. When you have your gun drawn, it takes a full 11 seconds to spin around in a 360-degree circle. Eleven seconds! That means you can’t turn fast enough to shoot enemies who are coming at you from the side. You also can’t aim and turn fast enough to shoot an enemy who is running across your view. It’s really annoying when that enemy is running right to your side to take a close-and-personal shot at you. It should be the easiest thing in the world to shoot someone coming at you from the side, but it is the hardest.

The problem of having only two guns is that you don’t know which type of enemy you will face next. A Tau sniper pistol can penetrate the armor of any of the bosses, but it only has six shots. The Tau is a great prize to hang onto, but what if you also have an eight-shot grenade launcher as your big weapon? If the next scene has a host of enemies, you’re up the creek. But the good thing is that it almost always pays to take the rare weapon with you. You can shoot an enemy down and pick up a generic pistol or machine gun if you need a high-ammo gun.

One of the car chases in the game has Drake jumping from a running horse to a moving truck. That’s cool the first time you do it. But what about the next 10, as Drake tries to take down an entire caravan this way? The horse never gets tired.

Some of the boss fights are tough. But the super boss fights are annoyingly so. They get so repetitive that you start seeing the same battle animations over an over again. If I’m going to have a battle that has dozens of sequences to it, I want dozens of animations. Not five or six that are repeated ad nauseam. 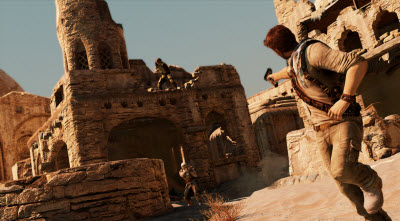 The question becomes whether as a reviewer I should dock the game some points in my review score because of these annoyances, which if they go unmentioned will almost certainly wind up in Uncharted 4. I feel like I’ve collected a big bag of coins and have nowhere to put them. Yes, I’ve got to dock them. But we already rated Gears of War 3 at 92 and this game is a lot better than that one, in my opinion. So we’ll let Naughty Dog skate by with 91 out of 100. I honestly hope that the developers pay close attention and deal with some of the annoyances for Uncharted 4. Hopefully, by then, they’ll have some new Sony hardware to build it upon.