For his last hurrah, Nathan Drake is getting some help from an unlikely ally.

The jovial treasure hunter has been the star of the Uncharted series since the first entry debuted in 2007 for PlayStation 3. Nearly 10 years and 21 million copies sold later, developer Naughty Dog is ready to say goodbye to the action-adventure franchise with Uncharted 4: A Thief’s End (out May 10 exclusively for PlayStation 4).

During a recent presentation for the press in Los Angeles, creative director Neil Druckmann said “compromising was never an option” for Nate’s swan song, hence the numerous delays the game went through before the studio firmly settled on a date. Naughty Dog wasn’t satisfied with just making a larger, prettier sequel. A lot of the innovations in Uncharted 4 actually occur in between the action-packed set pieces and impressively detailed cutscenes.

And it has The Last of Us, the developer’s last major project, to thank for that.

While both games are drastically different in tone and gameplay, Uncharted 4 as it is today wouldn’t exist without its critically acclaimed post-apocalyptic cousin. Some mechanics from The Last of Us actually carry over into the new game. Its influence also occurs behind the scenes within the game’s code. Uncharted 4 still feels like the swashbuckling adventure it’s always been, but now, the storytelling is a bit more nuanced because of its bigger levels, better artificial intelligence systems, and advanced animation techniques. 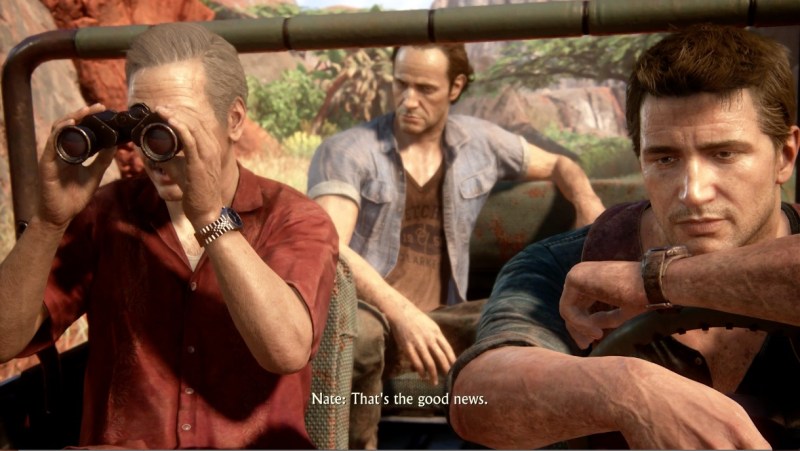 Above: From left to right: Sully, Sam, and a tired Nathan Drake.

The new demo I played at the preview event featured one of Uncharted 4’s massive levels. Nate, his older brother Sam, and trusted mentor Sully are in Madagascar to look for the lost treasure of the infamous pirate Henry Avery. Their journey takes them to an expansive valley that surrounds a volcano. The level was so huge that the best way to get around was to drive a jeep. But the addition of vehicles doesn’t restrict Nate’s nimble movements: You can leave the car at any time to explore ruins, caves, and other hidden areas.

The demo also introduced some of Uncharted 4’s new storytelling opportunities. When I first left Sam and Sully to investigate the remains of a former pirate outpost, I only took a few steps before stopping to look back at them. Sam suddenly started asking Sully how work was going and if he still traveled a lot. Their talk lasted no longer than 30 seconds, but I was surprised it happened at all. It felt like an evolution of the quieter, non-violent moments seen in past Uncharted games.

Sam and Sully didn’t always speak to each other when I left them, but the few conversations I overheard added some interesting background information to their characters. It was as if they had a life of their own. When I spoke to Uncharted 4 co-lead designer Anthony Newman about this, he told me that the tech they used to facilitate those conversations is “remarkably complex.”

“The thing that impresses me — that our animators and programmers were able to pull off — is when you’re in the car with Sam and Sully as they’re having a conversation, they actually gesture to each other,” said Newman. “They’re looking back at each other, gesturing along with the things that they’re saying. And on top of that, if you hit something or go off a jump or something like that, their bodies — it’s like semi-ragdoll [physics] — will move around as they hit the bump [while also continuing their conversations].”

Uncharted 4 also has optional conversations, something it borrows directly from The Last of Us. These occur in situations where, if other characters are with you in a specific place, a button prompt will appear over their heads. Pressing it triggers additional dialogue between Nate and whomever he’s with at the time. The demo had a few of these moments, but I wasn’t able to find them. 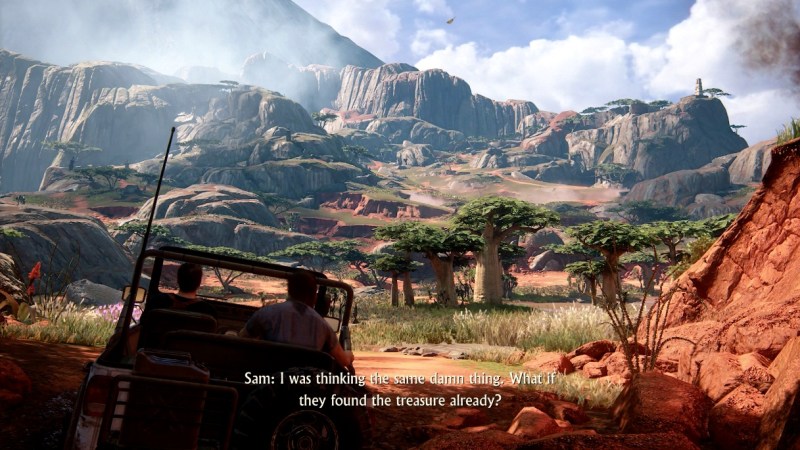 Above: The boys have a lot of ground to cover.

Another feature from The Last of Us is seen in Uncharted 4’s revamped combat system. In The Last of Us, Ellie, your main companion, could help you out in a fight by tossing a brick at someone or stabbing them with her knife. Naughty Dog doubled-down on this helpful, independent A.I. in Uncharted 4 and gave it some new upgrades. Now, your allies have a wide array of melee attacks, and for the first time in the series, they can perform stealth kills. Newman said they’re “way smarter” than Ellie ever was.

In the demo, both Sam and Sully had the ability to get me out of sticky situations. But since you can’t directly order them to kill a specific enemy, their behavior is a little unpredictable. It was only in my second playthrough that I noticed them helping me. While I was hiding behind cover, Sam ran ahead and grabbed a guy who was shooting at me, locking his biceps under the enemy’s arm pits. It took me a second to realize that Sam was actually restraining him, so I could get the easy kill.

Another example appeared in a video from Druckmann’s presentation, where Sam tackled a guy Nate was grappling with.

“Their presence creates a lot of new, emergent situations. [In previous Uncharted games] the allies were there for story reasons,” said Newman. “Now, they’re kind of this wild card in terms of gameplay. You can get into a scrape, and they’ll save you, or they’ll get in trouble with some other enemy. I think they add a lot of spice.”

With Ellie, Naughty Dog had to cheat by making her invisible to enemies: She could sneak around in plain view without getting spotted. But that was a necessary compromise for the stealth-heavy combat in The Last of Us. The alternative would just lead to frustrating deaths that would be out of your control. While you still might see odd moments like that in Uncharted 4, Newman said that the smarter A.I. means it won’t happen as often as it did with Ellie. 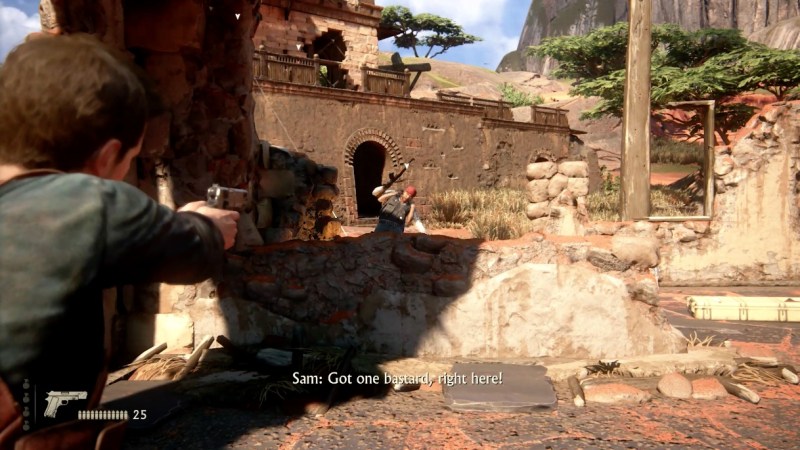 Above: Sam lends a hand.

Over the years, Nate has seen more than his fair share of huge explosions and crumbling buildings (and occasionally falling off those buildings). Uncharted 4 still has dramatic set pieces mixed in with expansive levels like Madagascar, but this time around, the studio also made sure that the smaller details shine, too.

“The amount of new tech that is in the game is staggering. The level that our standards have increased by is also a really big thing for us,” said Newman. “The idea of gestures seems like a small thing but … they really bring you into that world and makes the character come to life a lot better. The Last of Us was the first game where we developed that technology.”

Having believable characters is a big reason why the story in The Last of Us worked so well. Naughty Dog clearly took that to heart when it incorporated the character-building methodologies from that game into Uncharted 4. Newman said those lessons are just “part of our process and how we do things now.”

The fact that the studio is voluntarily ending one of the most successful franchises in PlayStation’s history isn’t lost on Newman, either. It wasn’t until late in Uncharted 4’s development that he realized how rare it is for a game company to be able to do that.

“In almost every other game, [developers] burn out or the studio shuts down or people get tired [of working on it],” he told me. “I think that gives the franchise so much meaning. … What’s great about telling the last entry in the storyline is that it has a definitive end. There are gonna be some permanent changes and that’s it. I think that’s awesome.”