Digital self-expression has evolved rapidly throughout the past couple of decades, particularly thanks to the gaming industry and strange new social worlds like Second Life that have been key in accelerating the pace. Our conception of the “avatar” has transitioned from Ultima’s symbol of the player character to the digital doppelganger of the user.

The customized sprites we choose or create tends to invariably reflect aspects of who we are or want to be, be it a projection of our idealized self, or the staging ground from which to experiment with our sense of self. Yet, however fun and fruitful these experiments can be, the screen has always stood as the nagging perceptual barrier to make us feel separated from the avatar.

The real shift in digital self-expression comes only when that barrier starts to dissolve with the virtual embodiment that is made possible with VR, in which both the body and mind can be more readily tricked into believing the fantasy is real, and it is the avatar that plays the operative role in blurring the lines.

No one really understands the mechanics at work, but our physicality is well-oriented to believe that a simulated VR experience is real. Indeed, last month when reporting on my experiences at the World VR Forum, I described how my body was instantly struck with utter awe as I strapped into the full-body apparatus of the Birdly simulator. My reptilian brain was convinced that it had somehow teleported above the skylines of New York City and my phobia of heights was triggered, so much so that my wife had to walk over and remind me to breathe.

Our bodies map themselves instantaneously and automatically to these simulated 3D worlds, and without our volition.

“We ran some experiments years ago getting people to enter VR sitting down in the same seat as an avatar, whenever a participant moved their legs and arms to match that of the avatar they described a profound sense of being present.” says Danny Stefanic, CEO at LearnBrite.com, a VR platform that allows educators to enhance learning through avatars, non-linear dialogue, and gamification through virtual environments. “Part of the experiment involved reaching down and placing your virtual hand on your virtual knee, again the feedback from this connection with the physical self created a deep sense of immersion.”

There’s no telling what the limits are to the physical and physiological impact that immersive experiences can have on us, and in terms of the avatars that we step into as our digital identities, there is all the reason to expect a loosening on our psychological grip to reality. It’s a psychic spell that makes me think on the deeper psychological chord it strikes with our cultural affinity in experimenting with masks, costumes, and even the worldwide festivals of the Carnival.

“It’s interesting to consider the work done by Keith Johnstone in the use of masks for theatrical improvisation workshops. The masks have the power to evoke the same characteristics and personality traits in different actors in different workshops across cultures.” says J.P. Stapleton, a London-based designer. “This suggests the mask, or avatar, has deep rooted psychological coding that channels those engaged with it.”

Virtual embodiment empowers VR content to have far-reaching applications across almost every enterprise and consumer sector that you can imagine, making us more productive, engaged, and surprisingly vivified, but in my opinion it also comes with the collateral effect of becoming something we identify with as increasingly intimate and personal. Particularly in light of social VR experiences, I think user demand for character customization will be a critical feature that creators need to anticipate for early.

In general, it’s been more popular in Asia to offer a limited set of predefined characters, while in the west the demand has been to furnish character creation engines that allow for users to fashion their own unique avatars. I think that, in the setting of VR, the worldwide trend will inevitably trend towards offering users greater and greater autonomy, until avatars are as integral to our sense of self as they are in “The Oasis” as depicted in the movie, Ready Player One.

Creators are in for a big balancing act in order to tackle the challenge according to the category and nature of their content. In the case of Hubs by Mozilla, a social VR experiment recently released by the pioneers of WebVR and which I covered in May, the approach is to prepare the ground initially with the release of neutral bot-like characters and gradually introduce more powerful avatar and identity options.

“Our general philosophy in this arena is to “first, do no harm.” With avatars and identity, it’s easy to inadvertently end up in a place that will result in negative dynamics if not enough care and thought is put into designing the choices users have.” says Gregory Fodor, Engineering Manager, Social Mixed Reality at Mozilla. 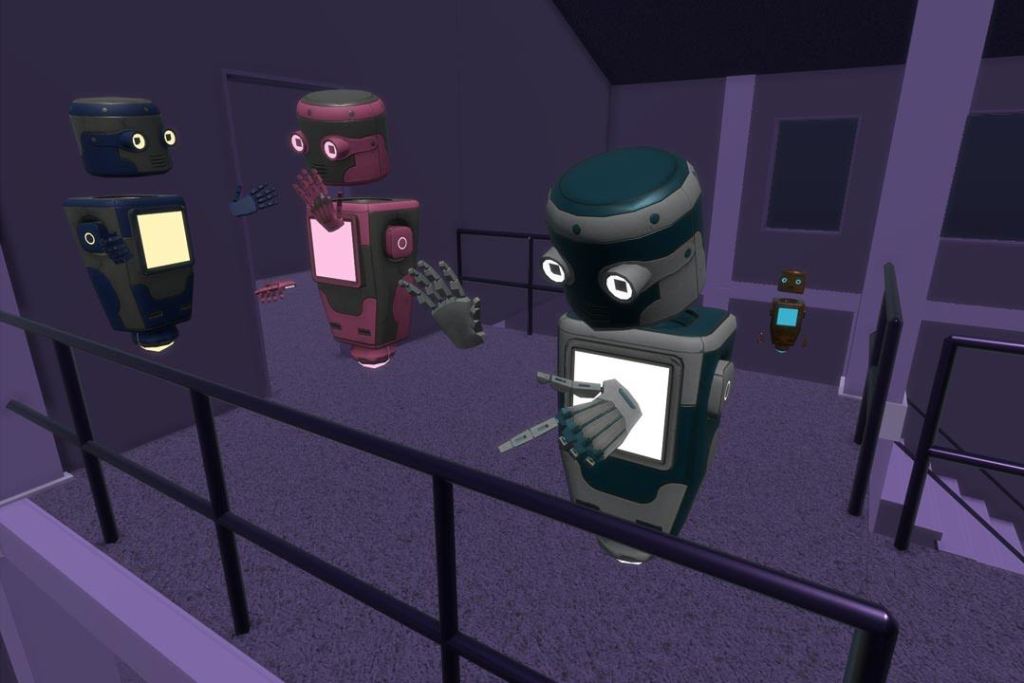 Above: Avatars in Hubs by Mozilla

“The initial set of avatars we’ve included in Hubs were designed to be simple, understandable, and deliver expressive non-verbal body language, while not falling into common traps like the uncanny valley or tying themselves to a person’s physical appearance. They definitely meet this purpose, but are not meant to express a cohesive view of how we think representation and identity should work in social mixed reality in general.”

Creators will go about the challenge by creating their own proprietary avatar builders and character creation engines that introduce their own range of body types, complexions, genders, and other variables that go on until infinity and back, which is the daunting task that will fragment the industry in every conceivable direction.

As a strong advocate for WebVR, I hope that developers will also look to the inherent nature of the immersive web and how it invites users to bring their own avatars into the 3D worlds they surf in and out of by way of specialized features like traversal linking, enabling one aspect of the fabled Metaverse to start to be realized.

Case in point is Gravr, the VR profile API that follows users from VR experience to VR experience, customized to them and based on their hardware and real-life environment. It’s unlike any other approach because it’s not an avatar builder but a human-centric platform that allows users to personalize their avatar based on their own body measurements. If an application supports the Gravr API, it can allow any user to load up their own personal avatar and digitally manifest according to their customized parameters of comfort. 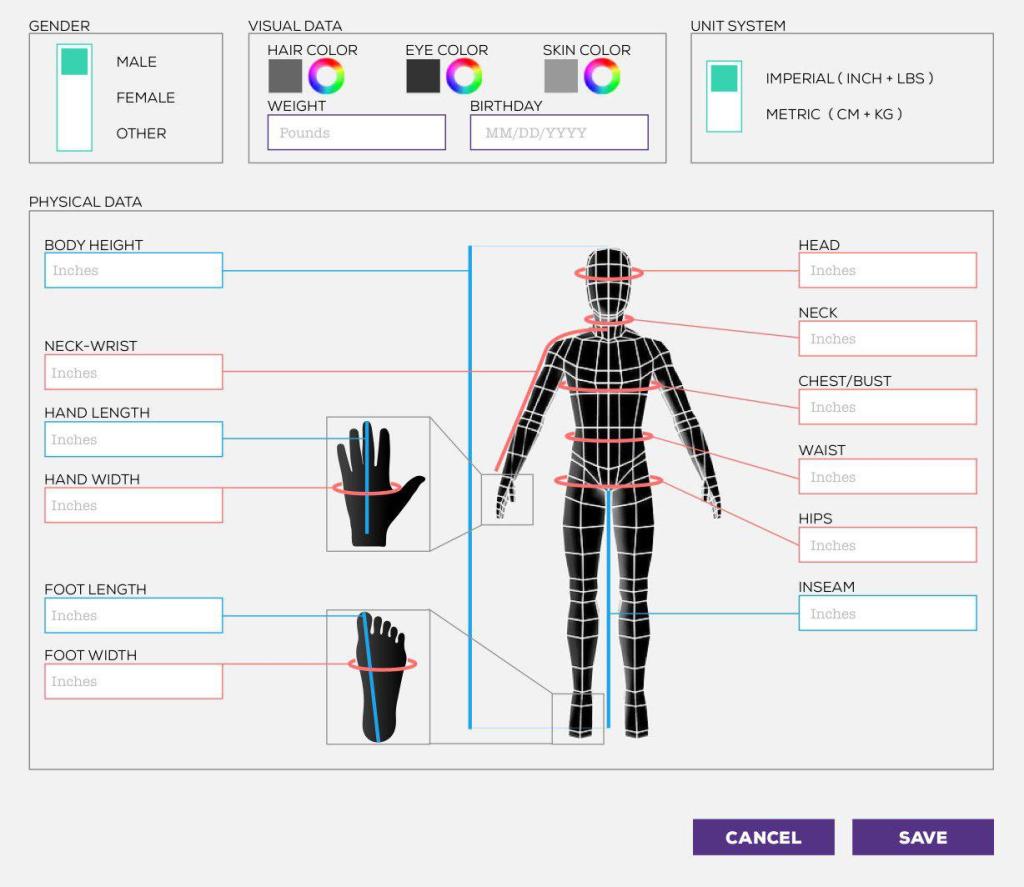 Above: Personalized avatars by Gravr

“Gravr’s approach to avatars is progressive. If the application allows the API, the profile will deliver the user’s meta information, measurements of the user, to scale the game character to the size of the user for an accurate proprioception and a comfortable immersive experience.” says Roland Dubois, creator of Gravr. “If the application allows the loading of 3D models, the profile will share the user’s custom avatars hosted via API. Since there is no current standard for models, texture mapping, and IK rigging, support is dependent on the integration of the API, however, in this fast-paced technological landscape, we are keeping Gravr nimble and lean.”

None of this is far-fetched. It’s progressive and knocking at our digital door now, and maybe sooner than some creators might want to admit or even be aware. We will identify with our avatars in VR, and they will be able to traverse beyond the confines of any single piece of content and travel with us like digital passports, not only content-specific, but content-transcendent.