Unity Technologies, maker of the popular Unity game engine used by millions of developers, issued a report today on the state of mobile gaming in the first quarter. It reported that 220,000 Unity games generated 4.2 billion installs across 1.7 billion unique mobile devices.

Those are some pretty astounding numbers that demonstrate the breadth of the mobile game industry, which generated an estimated $34 billion in revenue in 2015, according to market researcher Newzoo. The number of mobile game downloads grew 30 percent from the fourth quarter of 2015 to the first quarter of 2016. 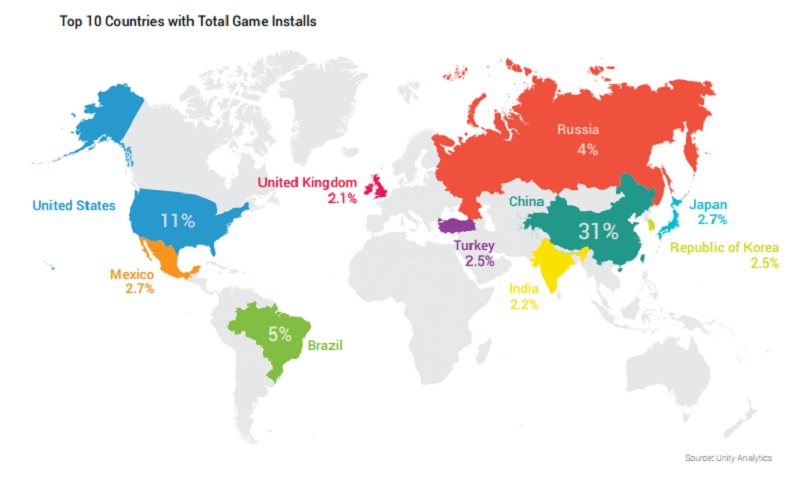 Above: Countries with percentage share of total Unity downloads.

Android retained its status as the global leader in Q1 2016, representing 81 percent of mobile game installs on Unity while Apple’s iOS was 17 percent. The Kitkat (4.4) and Lollipop (5.0 and 5.1) versions of Android account for 73 percent of all Android game installs.

China generated more installs on Unity in the first quarter than the next four countries combined.

Globally, the two most popular mobile device manufacturers were Apple and Samsung, with their devices accounting for 45 percent of global mobile game installs.

But Android is fragmented. Mobile devices run a variety of versions of the Android operating system, ranging from 2.3.3 (Gingerbread) to 6.0 (Marshmallow). The three most common Android OS versions (Kitkat 4.4) and Lollipop (5.0 and 5.1) account for 73 percent of all Android game installs.

Marshmallow (6.0 or later), which is the latest version of the Android OS saw less than 1.6 percent of installs globally. Android has historically had a large variety of devices, but Unity said it saw the landscape getting even more fragmented. As an example, the most popular Android device globally (Samsung Galaxy Grand Prime) only represents 1.7 percent of all Android devices.

Samsung holds an overwhelming lead globally accounting for 33.2 percent of global Android devices, with Xiaomi at 6.9 percent and Huawei at 6 percent. Overall, the top 10 manufacturers account for 68.8 percent of the game installs on Android.

Of the different devices Apple makes, the iPhone 6 and the iPhone 5s are still the most popular devices with a combined 28 percent of game installs. 7.9 percent of installs occur on the latest iPhone 6s, only slightly higher market share than the much older iPhone 5 (6.5 percent) and iPhone 4S (5.1 percent).

iPads as a whole account for 33 percent of installs. What’s most interesting is that people appear to be holding on to older versions of their iPads the opposite trend of iPhones. As an example the iPad Mini and Mini 2 represent 11 percent of installs, while the Mini 3 and Mini 4 are about 2 percent.