The company says the demos show that the game engine that “democratized game development” has grown up and is capable of being used by developers to create high-end games. That represents Unity’s threat, rising from the bottom, to high-end game engine tools such as Epic’s Unreal Engine.

Unity said that it has more than a million monthly active users for its game engine and 5.5 million registered users. Games built with Unity account for 30 percent of the top 1000 grossing games, and reach more than 1.5 billion devices.

“2015 was a big year, and 2016 will be an even bigger year,” said John Riccitiello, CEO of Unity, at an event at the Game Developers Conference today in San Francisco.

Unity debuted a multiplayer feature a year ago. Lucas Meijer, vice president of engineering at Unity, said 5,400 projects were started, and that resulted in 1.4 million sessions so far. A couple of games, included The Ship Remasted, are live now.

On stage, Meijer showed a demo, rendered in real-time, of a robot birth that was reminiscent of Neo’s awakening in The Matrix film. The demo used a lot of the cinematic effects you typically see in movies.

“It shows the extensibility of the Unity pipeline, using scripts and shaders,” Meijer said. “Anyone can make them.”

The effects include ambient occlusion, which adds shadows to hard-to-reach places in real time. Another effect is “color grading,” which is kind of like Instagram for games, or color modification on the fly. And still another effect is depth of field, allowing a developer to focus on one object and blur the background.

Joachim Ante, chief technology officer at Unity, showed off projects including Pollen, Kona, Overload, and Pamela. They have features such as light that bounces off objects and creates secondary effects. Some of the VR projects made with Unity include Budget Cuts, Call of the Star Seed, and Fantastic Contraption.

Clive Downie, chief marketing officer at Unity, said that games that use Unity have been downloaded 12.2 billion times. That is 23,100 downloads a minute and 386 downloads per second in the past year. The biggest month ever was last month, at 1.4 billion downloads in February 2016.

“That doesn’t matter unless the gamers, the human beings downloading those are enjoying them,” Downie said.

Just a year ago, 25 percent of the top-grossing 1,000 mobile games were Unity-based. Now it’s 30 percent. About 60,000 apps are now using Unity Analytics to capture data from 600 million daily events.

The Unity Asset store, where developers can buy things built by other developers, generated sales for 750,000 assets from 6,000 publishers in 2015.

Unity is helping with game discovery with its Made With Unity site, which chronicles developer stories. More than 100 stories have been posted, and more than a million people have viewed those stories.

“To the millions of guys and gals out there, we want to say thank you,” Downie said.

Vicki Ferguson, lead programmer on Ubisoft’s VR game, Eagle Flight, went up on stage to talk about making VR. When she tried on her first VR headset, it “blew my mind,” she said.

In that VR experience, you are an eagle flying over Paris. The demo by the Ubisoft Funhouse group got such a good response last year that the company decided to make it into its first full VR game.

“You have to try stuff and try stuff quickly,” Ferguson said. 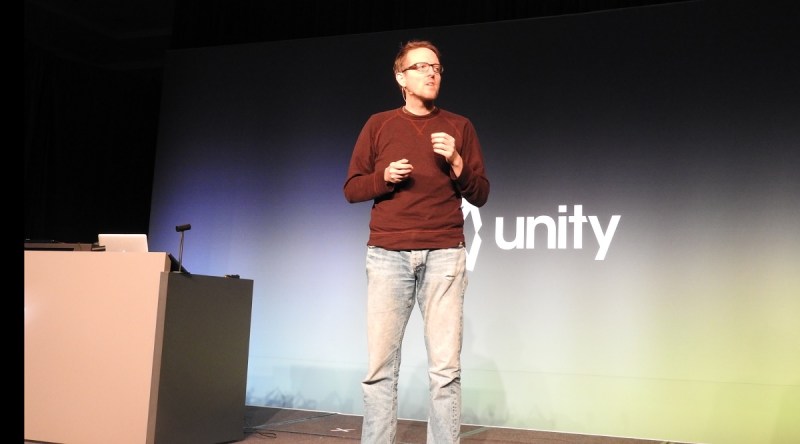