Rob Pardo made a huge impact on games in his career at Blizzard Entertainment, the publisher behind genre-defining games such as World of Warcraft, StarCraft, and Diablo. He left last year and became creative adviser for Unity Technologies, and he talked about his vision for multiplayer gaming today at the Unity 2015 event in Boston.

His view of the trends in multiplayer is interesting because it points to problems that Unity developers — more than a million of them are working on games — are going to tackle as they create their next online-social-mobile Unity-based titles. For those games to attract larger audiences and keep them engaged for a long time, they should master the fundamentals of multiplayer, Pardo said.

“This is a very selfish talk for me,” Pardo said. “I really love multiplayer games. I’m not making anything now. I really need you guys to make something that I can play.”

He played multiplayer versions of Warcraft II: Tides of Darkness, and the online massively multiplayer online games Ultima Online and Everquest. He found multiplayer to be compelling because it involved competition, cooperation, friendships, community, and it was unique to the gaming medium.

“If multiplayer is so compelling and people play these games for thousands of hours, why aren’t we making more as an industry?” Pardo said. “One reason is they may seem too niche. But the top-grossing games of all time include a lot of multiplayer games” such as Call of Duty: Black Ops and World of Warcraft.

They’re also pretty expensive to build. Pardo said that doesn’t have to be that way for every multiplayer game.

Making online games is also pretty hard. They’re difficult to balance for varying player skill. You also have to add features such as friends and chat.

“I do acknowledge making multiplayer games can be harder, but I guess I’m just saying it can be worth it too,” Pardo said. “As cloud services come online, it is getting easier and easier.”

The types of offline multiplayer games are proliferating, like card games, board games, and even drinking games. Such social games should tell us that people want to do similar things online, he said. Social games let you explore friendships, like who you can depend on, what they are good at, who picks you up when you are down, and are they good winners or losers. He noted that a large number of people have met spouses in online games.

The challenges associated with multiplayer today amount to what Pardo calls the “water cooler problem.” It’s hard to find each other in games. Players may not be good enough to play at the same level. They may not be in the same part of a story, or they are playing on different servers.

“All these arbitrary game design rules mean we are not thinking about multiplayer in the right way,” Pardo said.

As for the future, he said, “I think there are a lot of places where multiplayer can go.

He noted gamers are playing across generations.

“I want to have more games that I can play with my kids,” he said.

And he said that esports games are going to get huge traction, and they will be featured in the future on channels on TV such as ESPN. 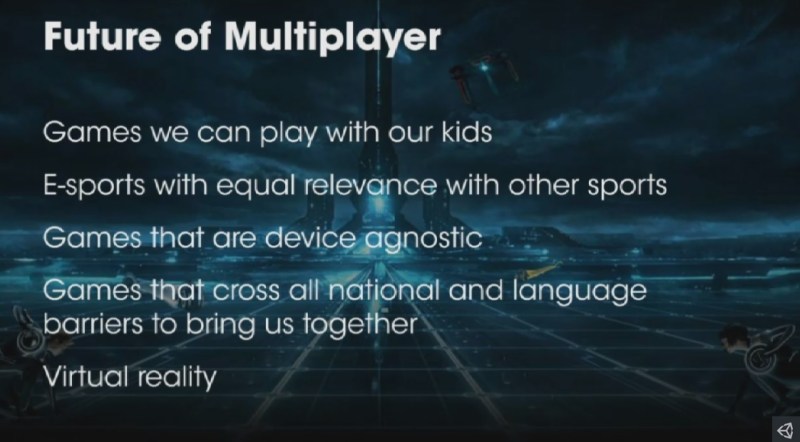 Above: The future of multiplayer according to Unity’s Rob Pardo.