At last week’s Game Developers Conference in San Francisco, Hello Games art director Grant Duncan dispelled some of the mystery surrounding the ambitious space-exploration game for PlayStation 4 and PC. He gave two talks about the art and technology behind No Man’s Sky, and he explained how such a small independent studio created 18 quintillion planets, each with different combinations of wildlife. That’s a huge undertaking for just four artists — Duncan joked that they only had to make 4.5 quintillion planets each.

To compensate for the lack of manpower, the developers created a tool that procedurally generates the planets and populates them with different life forms.

But, as Duncan noted, that’s scary for someone in his position. When he asked other artists about their thoughts on procedural technology, he received a bunch of negative responses like, “Procedural art is a big pile of shit,” and, “Randomness can never lead to good art.” The No. 1 concern among them was that it takes control away from the artist.

“The truth is we’re actually all control freaks as artists. We’re so use to having complete control of every single pixel,” said Duncan. “Especially now as digital artists. With Photoshop, we can zoom right in and completely obsess over something no one else will ever care about. And procedural art is kind of the opposite of that — but it’s not. I really love procedural art now, but it definitely required a bit of an attitude change.”

It helps that Hello Games came up with a system that enables the artists to have some influence over how the mathematical formulas interpret their work. 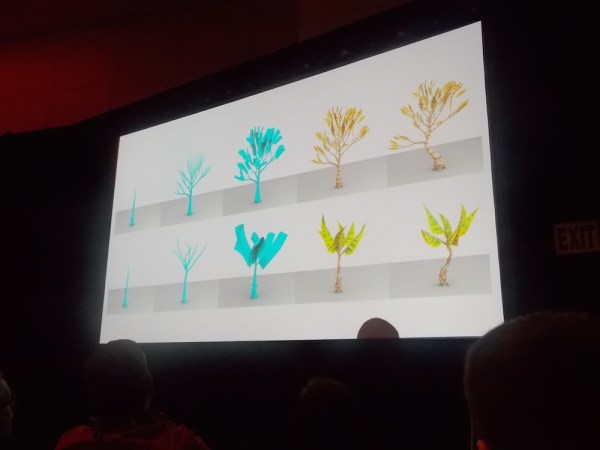 Above: An example of how Hello Games’ algorithms can add different features to plant life.

‘A big box of maths’

No Man’s Sky’s artists use what they call a “blueprint” system for animals, spaceships, and anything else that isn’t the terrain (a different set of calculations handles that). They create basic templates of these objects for the procedural tools to work with, and a “big box of maths,” or algorithms, determines how the rest of those objects’ components come together.

The system is similar to the character creation tools you’d find in some role-playing games, with sliders that adjust various attributes. Duncan showed the picture above as an example: The program starts off with the blueprint of a tree trunk, but then it applies branches, textures, and poses. They have a library filled with a ton of materials (such as tree bark and leaves) for the computer to use, meaning hundreds of thousands of different variations are possible.

The same applies to the alien creatures. On top of textures and features like horns or markings (which change based on the climate they’re living in), the procedural system determines what skeletal structure (the rig) an animal will have. The way they move and carry themselves can vary depending on how they’re built; they can be hunched over like a cow or stand proudly like a stallion. They can also be fat with slow, lumbering movements or move a lot faster if they’re thin. The developers cut down on the amount of work they needed to do by sharing these rigs across similar animals, like the way they use the shark’s rig in dolphins and whales.

They can even define the age of these objects. When the system spawns a bunch of the same animals in one area, Duncan can specify how many adults, adolescents, and babies are in that group. 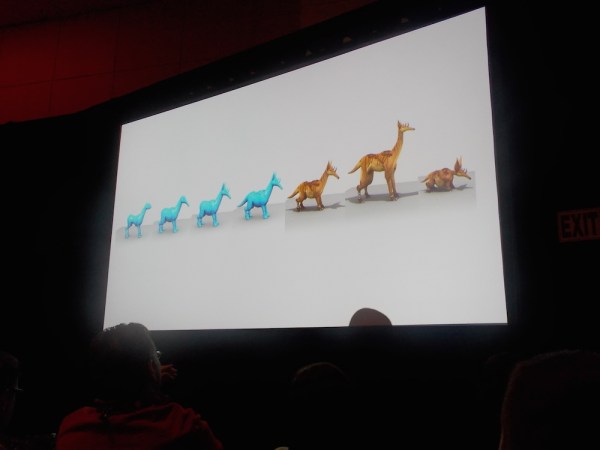 Above: The blueprint that artists create is on the left. The right side is some of the different variations the computer comes up with.

Since Hello Games can’t predict what exactly the computer will make, they made a list of rules that the system must follow. This increases the computer’s chances of creating scenery that an artist would make by hand, such as the placement of certain rocks and bushes around trees. While Duncan admits that it “wasn’t a pleasant experience” — he had a lot of back-and-forth discussions with coders on how things should appear in the game — he said he became a better artist because of it.

When you see screenshots of No Man’s Sky, one thing immediately stands out: the bright color palette. Duncan found inspiration in colorful sci-fi art from the ’70s, looking at artists like Chris Foss (who designed iconic covers for many of Isaac Asimov’s books) and Ralph McQuarrie (best known for his illustrations on the Star Wars films). One of Duncan’s goals from the beginning was to stay away from the color black. He looked at photos from NASA as references for creating a believable space travel experience without resorting to a generic black star field. 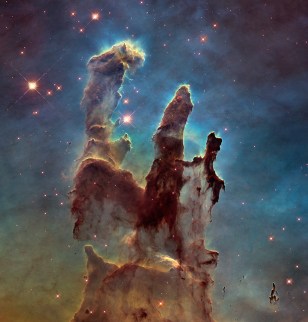 Above: Duncan is especially fond of NASA’s “Pillars of Creation” photo from the Hubble Space Telescope.

“To me, science fiction is not about war. It’s about that feeling of the frontier, that feeling of adventure,” said Duncan. “It’s not post-apocalyptic. It’s exciting. It’s full of hope.”

While it was tempting to create bizarre alien landscapes, the team decided to focus on what they could see in the real world. They used their research on Earth’s geography as a starting point for their designs, so you’ll see areas that resemble limestone caves or discover lands affected by wind, coastal, and glacial erosion. This also explains why many of the creatures look familiar: Understanding how to mimic real animals made it easier for the artists to bend the rules and create otherworldly versions of them.

With 18 quintillion planets, checking every possible combination of plants and wildlife is a futile task for a few people to do, let alone hundreds at bigger studios. That’s why Duncan uses robot drones: They travel to the alien worlds and record their findings into an HTML file, which contains an animated GIF and the location of the planet. If he doesn’t like what he sees — maybe a certain color doesn’t look good on trees — he can fly there himself to figure out what went wrong. He can change the system’s rules to make that outcome less likely to happen. 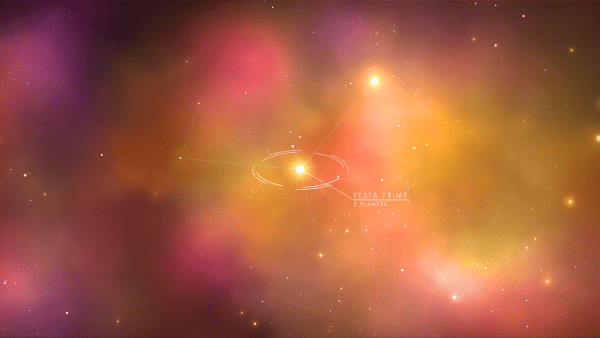 Above: Each dot is actually a solar system that you can visit.

Duncan’s GDC talks gave a fascinating glimpse into what makes No Man’s Sky tick. We still don’t know much about how it actually plays — we know it’s big, it’s pretty, and it won’t let you ride dinosaurs — but when it does finally come out, I just want to grab the nearest spaceship and go on a intergalactic safari adventure.