The company announced today that it is adding HTML5 exporting to its Unreal 4 game-development engine. This will enable developers to export their projects to run on the Web in a browser like Firefox, which supports HTML5 and WebGL graphics. This also means that high-quality games can run in a browser without needing a plugin, which was a major barrier for the Unity graphics engine on the Web. In addition to the HTML5 export capabilities, Unreal’s latest update enables support for game worlds that take up an area of up to 100 square kilometers. That’s larger than most small towns. 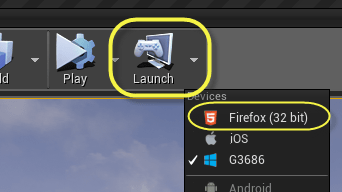 Above: Developers can now export their Unreal 4 games to HTML5 browsers.

Mozilla, the company responsible for the Firefox browser, is a big proponent of web gaming, and it weighed in on the Unreal announcement.

“With the launch of Unreal Engine 4.7, Epic Games has added the ability to export to HTML5 as a regular part of their Windows binary engine releases,” reads the Mozilla blog. “One of the world’s most advanced game engines is one step closer to delivering truly amazing content right in your browser. With this addition, developers will be able to create content in Unreal Engine 4.7, immediately compile it to the Web, and launch it in their browser of choice with the click of a button.”

Epic notes that developers will need to use Firefox, Safari, or 64-bit Chrome during development to get HTML5 games working — although final builds will work on 32-bit Chrome. Studios will also need Windows for now as Epic is still building HTML5 exporting for Mac.

Mozilla wants developers to start using this feature so they can provide feedback both to itself as well as Epic. The company is attending next week’s Game Developers Conference in San Francisco with the hopes of talking more with creators about the possibilities of WebGL and HTML5.

Epic has a whole list of other new features that developers using Unreal 4 now have access to. Read the company’s full rundown for more.