Editors note: This review has some minor story spoilers.

The new PlayStation 4 exclusive psychological horror game Until Dawn may go down as one of the finest collaborations of Hollywood and gaming.

Such collaborations have been tried for decades with underwhelming results, and this title could have been just one more cheap game version of an easily forgotton Hollywood horror B-movie. But the collaborators at Supermassive Games and horror film writers and directors Larry Fessenden and Graham Reznick took their time to craft an ingenious and intricate story, and they made full use of the next-generation console’s ability to create realistic human characters that really look like people in a horror movie.

The result of the four-plus years of work is a riveting, scary game that gives you a chance to save the characters in the story from making all-too-familiar mistakes in horror movies. Because the story is interactive, the experience is much more immersive and emotional. You can get to know the characters and feel much closer to them as they evolve, unlike the stereotypical characters who fill the body count in typical slasher movies. In the story, eight young adult friends are trapped on a remote mountain getaway after they find that there’s a killer loose among them. Your job is to make snap life-or-death decisions and save as many of them as you can as dawn approaches.

On the scary meter, Until Dawn ranks pretty high, as the creators actually tested the game with playtesters who were hooked up to biometric monitors. If a scene didn’t scare people as much as it could have, the developers went back to the drawing board. I measured my own pulse myself during part of the game. After one “jump scare” scene, my pulse shot up from around 70 to 108 beats per minute. I had plenty of little heart attacks while I played the 10 episodes of the game — twice.

But the title isn’t just about scaring the crap out of you. It also makes you ponder the relationships between characters and why you try harder to save some characters than others. The choices are not always black and white. The writing is really good and contemporary, with plenty of lines that will crack you up, like when a character says “Unfollow” after facing a psycho.

It’s also a story with a lot of foreshadowing and multiple layers. There’s a meta layer in the story where an analyst starts questioning you, the player, about how you think the “game” is going. The conversations with the analyst are just one part where you realize that nothing is as it seems on the mountain. And as the characters and story change, you realize that Until Dawn isn’t as predictable as you thought. 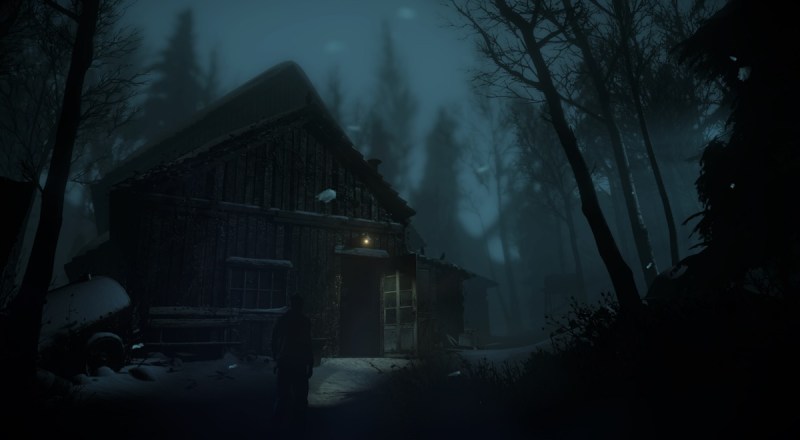 Above: Chris approaches an ominous barn in Until Dawn.

Supermassive Games and Sony have been working on the game for a long time, enlisting the seasoned horror filmmakers to concoct a story with a lot of branching storylines. Until Dawn was originally scheduled to be released on the PlayStation 3 with PlayStation Move motion controls. But the game was redone for the PlayStation 4 and the Dual Shock 4 controller, which also has motion-sensing capabilities. The new game has episodes that are akin to TV show segments. Between the two different games that were created, there are 10,000 pages of dialogue. There were so many branching stories that each story becomes like a main story unto its own, said Graham Reznick, co-writer of the game, in an interview with GamesBeat.

“We decided to rewrite everything,” said Reznick, regarding the switch from the PS3 to the PS4. “The PS4 had more facial animation and that meant that the actors could be much more nuanced and tell the story through a more cinematic dialog language.”

The game mechanics are similar to Heavy Rain and Beyond: Two Souls, where you have to periodically make binary choices, like hiding or running, to save someone’s life. You also have to be able to press the PlayStation controller buttons quickly and accurately in fast-moving situations. If you miss enough times, you may be sending a character to his or her death.

But the interesting twist that Until Dawn brings to the plot is the theory of the “Butterfly Effect,” or the chaos theory idea that suggests a small change in a system’s initial conditions can result in huge variations in a later state. The name was coined by Edward Lorenz, and it comes from an example where the flapping of a butterfly’s wings can cause subtle changes that affect the path of a hurricane weeks later. In the game, your smallest and biggest decisions can affect the outcome of the evening and who will survive “Until Dawn.” Sometimes, seemingly trivial choices will mean the difference between survival and death. 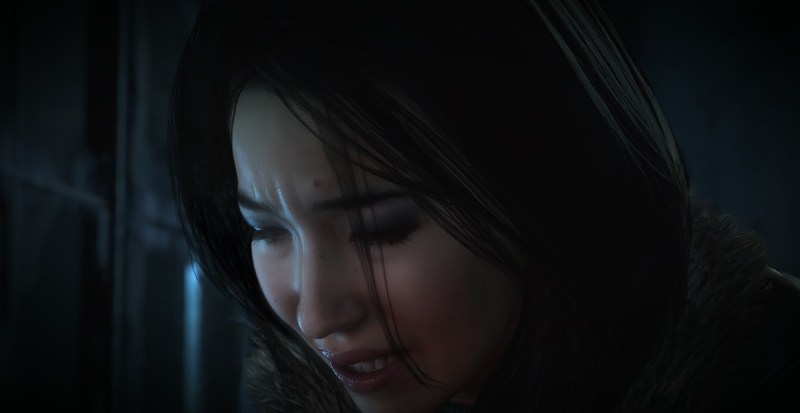 Above: Emily, played by Nichole Bloom, in Until Dawn.

Most game publishers advertise their games as “cinematic.” But this lives up to that claim. I’ve never been fooled by 3D graphics as much as I was in this game. The human faces look real. The movements of the characters still need work, as does the degree of interactivity. But when you’re staring at the face of one of these characters, it’s truly an amazing feat.

The title combines Hollywood actors with next-generation facial animation technology from Cubic Motion, the company whose animation tools also created the face capture of actors in games such as Call of Duty: Advanced Warfare and Ryse: Son of Rome.

As I noted in a preview, I saw from the outset that the characters are stunningly realistic, as if you’re looking at the real actors and actresses, rather than video game animations. Several times, my family members saw me playing the game and they asked, “Is that a movie or a game?” (It’s not a game I would willingly show one kids, though).

I caught a glimpse of the face of the cockiest male character, Michael (played by Brett Dalton), with a tear dripping from one of his eyes. It made me consider just for a moment that there was something deeper behind his always-macho facade. And for the most part, the close-up animations of each person made me feel sympathy for each character, rather than the usual sense of hate because they were about do something stupid that was going to get them killed. You form an emotional bond with the character and fear for his or her safety. And this only happens because of the quality of the motion capture and 3D animation.

It is as if the combination of Cubic Motion, 3Lateral technology, and the Killzone Engine in this title has almost gotten us across the “uncanny valley,” or the long-held idea that the more animators try to create realistic human faces, the more there’s something spooky about the image, and the more it eludes their grasp. 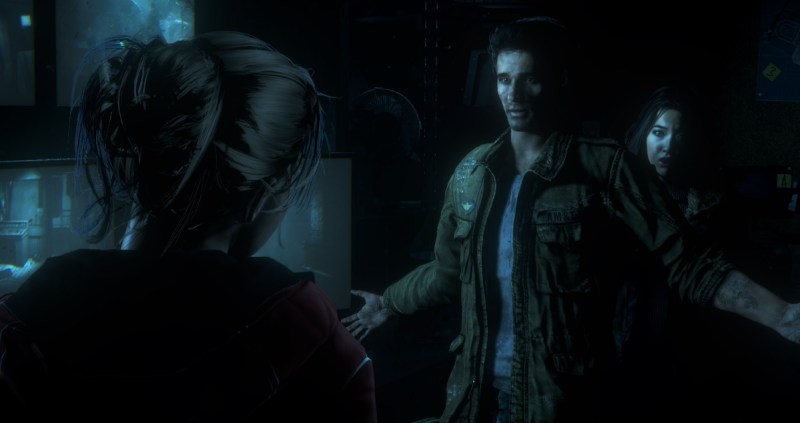 Above: Sam, Mike, and Emily contemplate a choice in Until Dawn.

Sometimes the best thing is staying still. The game uses a motion-sensing Dual Shock 4 controller. Early on, you learn that making no choice at all, such as letting a bird be, is the right move. Sometimes you have to hide. In that case, your job is to keep the controller as still as possible. If your hands are trembling, then you’ll lose for certain. You might as well put the controller on the ground.

In the very first scene, the group of friends plays a poor-taste prank on one of the girls, Hannah, luring her into one of the men’s rooms at 2 a.m. on the promise of secret tryst. But most of the friends are hiding in the room, ready to snap pictures of the unaware visitor. The victim runs off into the snow alone, followed by her twin sister, who wasn’t in on the prank.

Running off alone is, of course, a major no-no in a horror story, and it is one that you can’t do anything about. Your job is to do something that helps them avoid a horrible fate. The women started running off into the snow and quickly found there was something spooky out there besides growling beasts. One of them finds a totem that signifies “death,” and you know you’re about to decide something important. You have to choose whether they should run through shortcuts or stay on a path. Eventually, they wind up on a cliff, trapped by their pursuer, and you have to choose which one of the girls will survive.