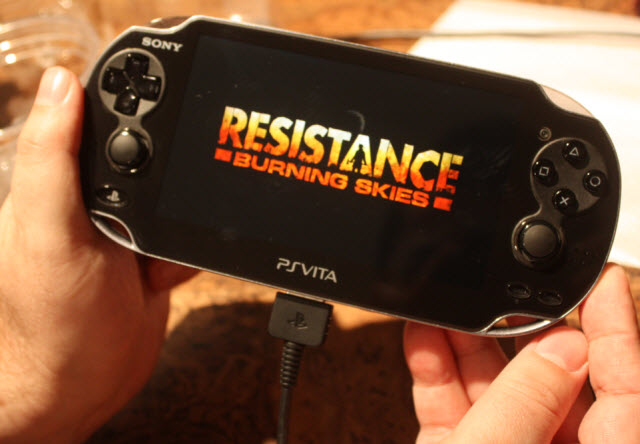 We got a hands-on preview last night of Sony’s upcoming title, Resistance Burning Skies, for the PlayStation Vita, which is Sony’s high-powered answer to both the iPhone and the Nintendo 3DS. Sony showed off a new level that hasn’t been seen before.

Sony is making a big bet that the PS Vita, which debuts Feb. 22 in North America, will appeal to players who want a high-end dedicated gaming device that isn’t doubling as a smartphone or a tablet. Resistance Burning Skies is set in a 1950s alternate universe where World War II didn’t happen but a nasty alien invasion did.

The title is one of a number of big games coming for the PS Vita that will feel very much like you’re playing a console game, only on a handheld. The first-person shooter game takes advantage of a variety of controls for the PS Vita, which has buttons, analog controllers, bumpers, and touchscreens on both the front and back of the device.

Developed by Nihilistic Software, the game is coming in 2012 for the PS Vita. The game picks up the story of Tom Riley, a firefighter who fights the Chimera aliens invading the United States. While the aliens are tough, you have the benefit of having all sorts of cool weapons.

It’s very console-like because you can control two analog sticks at the same time. Those twin sticks give you great control over the flow of the game and where you want to place your cross hairs when shooting at the enemy. One stick moves your body, and the other moves your cross hairs. You can move into cover simply by moving up to a barrier. You can toss a grenade exactly where you want it to go by tapping the on-screen icon for a grenade and dragging it to the spot where you want to throw the grenade.

In this scene, the human defenders want to rain a missile attack on the George Washington Bridge over the Hudson River. But a VTOL aircraft has crashed on the ship and you have to get to it, rescue its passengers, and then escape before the missiles come down. The problem is that there are lots of nasty Chimera in your way.

The demo shows a variety of weapons, from a machine gun to a sniper rifle. The enemies try to flank you as you zoom in on one enemy with your scope.[youtube=http://www.youtube.com/watch?v=hFE6Q6uP9NA]