User acquisition costs for mobile games and apps rose again in September, according to mobile marketing firm Fiksu. That means that life will continue to be hard for small app makers who don’t have highly viral apps and games.

Fiksu said that the cost per loyal user index (which measures the cost to acquire users who open an app three or more times) rose to $4.14 in September, up 2 percent from August and up 84 percent from a year ago.

But app download volume fell 21 percent from August to 6.4 million, Fiksu said. That decline will likely be short-lived, as holiday demand picks up. Fiksu said that its App Store Competitive Index, which tracks the average aggregate daily downloads of the top 200 free iOS apps, had the lowest volume on iOS since September of last year. 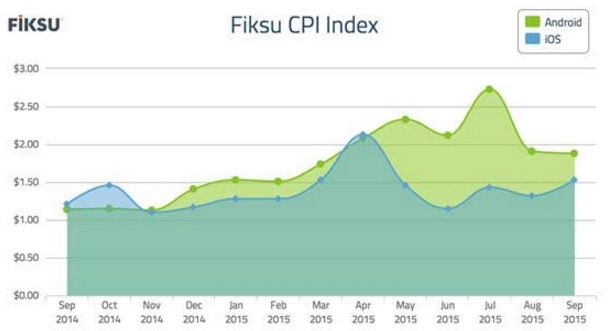 Fiksu said the biggest reason was anticipation of the new iPhone 6S and 6S Plus that arrived at the end of the month. Fiksu said that users who planned to upgrade in just days or weeks had no interest in adding new apps to an old device.

Another contributing factor was the strong uptake of iOS 9. Due to the strong adoption rate, Fiksu said that many app developers were quick to upgrade their apps to require the new operating system. Users about to replace their phones are less likely to bother upgrading the operating system, so fewer downloads of these apps were recorded in September. The drop in downloads was also seasonal, as Labor Day fell late this year.

One challenge that we highlighted in our VB report on mobile user acquisition is that brand dollars are currently flooding mobile marketing in the run-up to the Christmas shopping season, reducing the availability of premium inventory.

“For both marketers and users, we saw evidence of less engagement and activity across the landscape in September,” said Fiksu CEO Micah Adler in a statement. “However, this is about to change dramatically as the impact of the 6S and 6S Plus is felt in October’s indexes and the countdown to the holidays begins. In this most competitive time of the year, both costs and volume will rise, so it’s imperative to be smart about spending, and that means targeting the right audiences to capture new loyal users.” 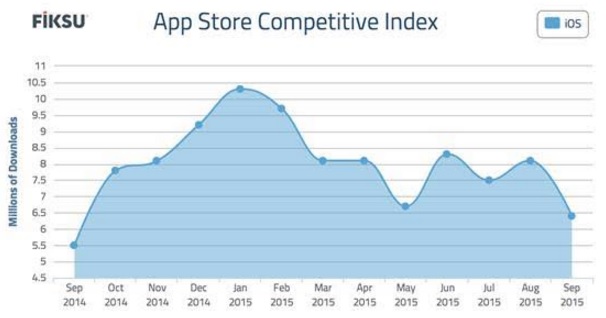 Above: Downloads took a slight drop for the top 200 apps in September 2015.