The costs of acquiring new users for mobile apps reached an all-time high in December as well-heeled companies scrambled for mobile market share over the holidays, according to a report by mobile marketing firm Fiksu.

The Fiksu Index published today shows that the cost to acquire a loyal user (one who opens an app three times or more) was $4.23 in December, up 19 percent from November and up 101 percent from December 2014. The all-time record beat out the previous record of $4.14 in September.

That should give shivers to mobile app marketers, who have to advertise heavily to get a user and then hope that the user sticks around long enough to spend money in a free-to-play app or game. As Fiksu predicted, the slight decline in November was only a temporary respite, with costs rebounding in December.

For newcomers to the market, it’s a grim task to penetrate the top ranks. Another report on the fourth quarter iOS app store from analytics firm Sensor Tower showed that games dominated the charts and that all of the top-grossing games for Q4 were released before Q4. Companies such as Machine Zone, whose Game of War: Fire Age and Mobile Strike games are in the top-grossing ranks, have turned to hiring stars like Arnold Schwarzenegger and creating television commercials to make their ads stand out from the pack. Machine Zone led the spending by game makers, who spent $630 million on TV ads in 2015. 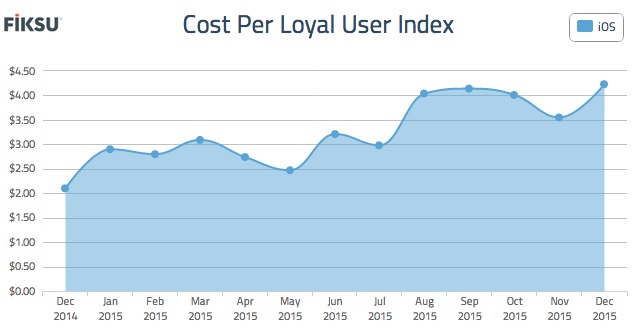 Above: Cost per loyal user rose in December 2015.

On the positive side, the growth in acquisition costs coincided with a growth in downloads. The Fiksu App Store Competitive Index, representing the combined daily downloads of the top 200 free iOS apps, rose 16 percent in December compared to November. Daily app downloads reached 8.5 million in December.

While this increase in volume is significant, it is comparatively less than the increase in costs, Fiksu said. That suggests there was fierce competition among app marketers in December. The patterns in December showed the holiday impact, with downloads surging 13 percent during Christmas compared to the week prior. Users who got new tablets and phones filled them with apps.

“Holiday competition for loyal app users was unsurprisingly fierce this month,” said Micah Adler, CEO of Fiksu, in a statement. “New device users are a desirable demographic and marketers will fight for the attention and home screens of these new users, for a chance to gain their loyalty for the long-term. We expect to see this competition continue into January.”

Fiksu also noted a significant discrepancy in the Cost Per Install (CPI) Index on iOS and Android, which measures the cost per install directly attributed to advertising. The iOS CPI declined 5 percent to $1.46 in December, compared to November. Meanwhile, Android CPI rose a surprising 52 percent to $3.34. This jump in Android costs, a spike of 144 percent year-over-year, marks the fifth month in a row that Android CPI more than doubled last year’s figures. 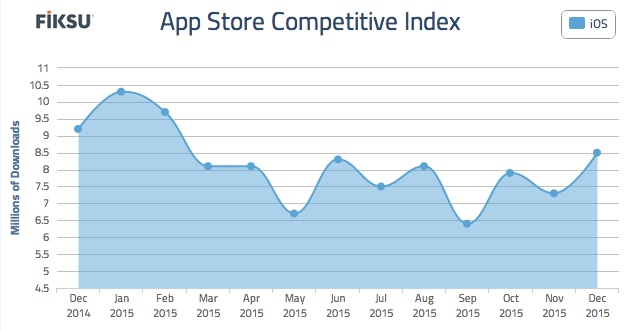 Above: Downloads rose 16 percent in December for the top 200 iOS apps.

Fiksu said the steep contrast between the two can be attributed to the popularity of incentivized marketing on iOS, particularly during times of intense competition like the holidays. App marketers on iOS have the ability to drive relatively inexpensive installs through incentivized channels, which helps them obtain higher ranks in the Apple App Store and keeps overall CPIs lower; this tactic isn’t available in the Google Play Store due to different rank algorithms.

While low-end Android phones bring down the worldwide revenue per user average, Fiksu said it is likely that Android users in developed markets and/or high-end phones are much closer to iOS in revenue potential. Furthermore, the evidence of growing Android CPIs shows that this revenue percentage gap may shorten over time.

Looking ahead to January, Fiksu said that marketers should prepare to see double-digit growth in download volumes, as has happened in three of the last four years. Fiksu also said that as 2016 proceeds, wearables and connected devices will make an impact on the market in some way. 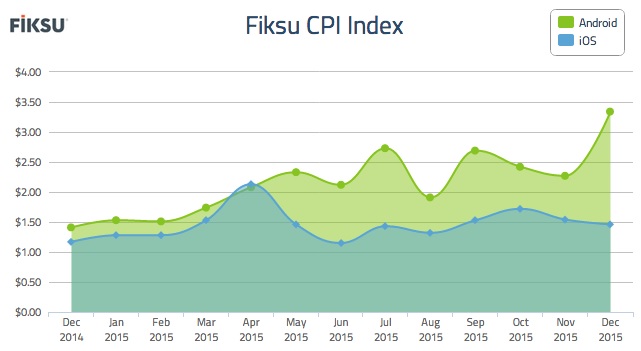