Vader Immortal was supposed to be a big deal. Developed by Lucasfilm’s ILMxLAB, the three-episode Star Wars VR series was described by famed writer and executive producer David S. Goyer as his “dream come true” — an immersive narrative about legendary villain Darth Vader “conceived and executed specifically for the VR medium,” launching on Oculus Quest. But when an article described Vader Immortal as a game, Oculus reached out for a correction. This was neither a game nor a series of games; rather, it was an experience.

Wait, what? “Experience” suggested that I might conclude the three episodes with a greater depth of knowledge about my character than a game, or have a stronger sense of involvement in the story than a movie. Or perhaps it implied less of a sense of play and more of a sense of being there. Maybe, some suggested, Vader Immortal could not be a “game” because only Electronic Arts had the rights to make Star Wars games.

Without a clear answer from Oculus, I spent months wrestling with this dichotomy, playing through — err, experiencing — each of the three episodes of Vader Immortal as they were released. By the end, I hoped that I would reach some bigger revelation about VR “experiences” relative to games.

That didn’t happen. After giving Oculus and ILMxLAB the benefit of many months (and $30 of my own cash) to prove that there was anything special about their VR experience, my conclusion is that the word is basically an excuse for not developing a concept fully into a game or movie. In other words, a VR experience is a movie without fixed cinematography, or a game minus deep gameplay or branching storylines — you’re a participant whose participation barely matters. Going forward, it’s a term that will make me view the developer with deep skepticism, and I would prefer to see it go away.

Vader Immortal’s story is pretty simple, and certainly wouldn’t be enough to fill a Star Wars novel. You’re the captain of a small ship whose ancestry attracts the attention of Darth Vader, conveniently located in a castle on the volcanic planet Mustafar. Vader needs your help until he doesn’t, so you’ll get a tiny bit of face time and Jedi/Sith training from the dark lord before being forced to confront him. 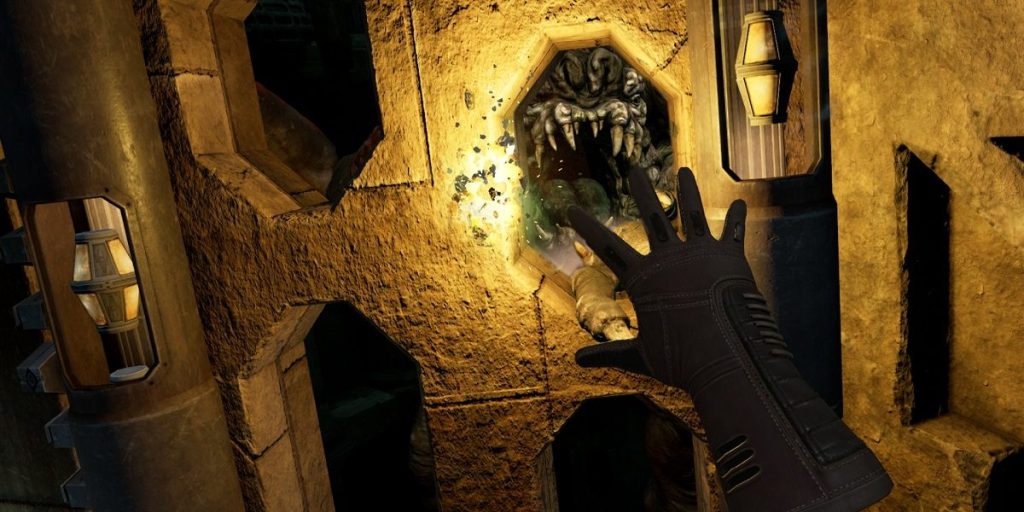 Because this is a Star Wars experience, you’ll interact with a wisecracking droid, humanoid aliens, stormtroopers, and a few different environments with all the dust, rusted metal, and sparks one might have expected from A New Hope. The graphics and audio are better than you’d expect from a standalone VR headset, though not PC- or console-caliber.

Unfortunately, if you’re hoping for deep immersion, you won’t find it here. Your character doesn’t have a name beyond “Captain,” or any personality to speak of. There isn’t any creature cantina or Jabba’s skiff moment where you feel like you’re inside a weird or dangerous scenario. Contrary to the title, you won’t learn anything new about Vader’s own mortality, either.

Instead, Vader Immortal feels largely like you’re pulling on a string that’s been set up to take you through a predestined path through some caves and starship hangers. A lot of the action is the VR equivalent of book page-flipping: keep tapping a button to move, move behind a character who’s talking, or traverse a corridor without assistance. Because the developers couldn’t just make it that boring, you learn how to grab and throw things with the Force and how to (briefly) wield a lightsaber — a feature that’s only lightly explored in the story, then left for a mobile game-quality training dojo.

Underdevelopment means that Vader Immortal’s key moments are interrupted by technical glitches — problems I saw in both episodes 2 and 3 — and otherwise have little resonance. One gets the feeling that the releases, particularly the brief and generally bland episode 2, were somewhat rushed out rather than polished, though there are bigger overarching issues than that. 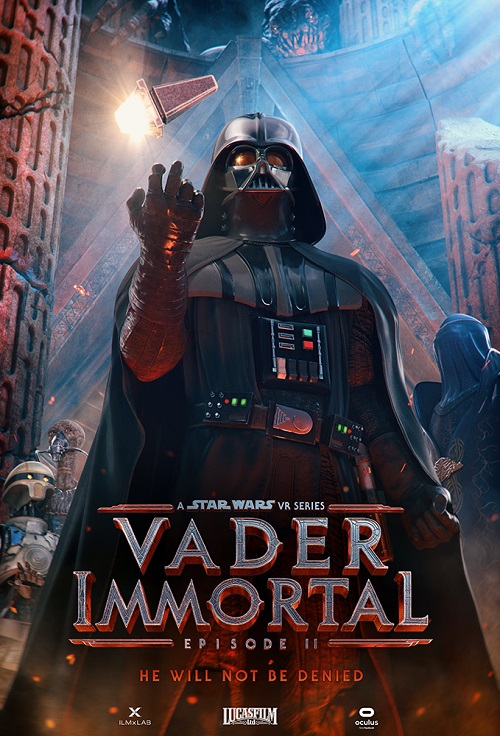 Above: Vader Immortal ads played up Vader’s size, but he’s not so imposing in VR.

For instance, during brief encounters with Darth Vader, I couldn’t believe that he wasn’t as imposing, tough, or as good with a lightsaber as anyone might imagine. Canonically, the character is supposed to be 6 feet, 8 inches tall, but he looked shorter than me when I went one-on-one with him, even though I’m 8 inches shorter than him in real life — something Quest is capable of knowing from its 3D mapping system. Immersive goggles typically make everything seem huge, but Vader Immortal is the rare example of a VR experience where a key element felt smaller than expected.

More intimidating than Lord Vader were groups of stormtroopers armed with blasters, but even then, there were no life bars or risk of having the story end — because this wasn’t a “game.” Episode 3’s gun-versus-lightsaber battles play out like Sega’s Virtua Cop, but with greater repetition and zero sense of peril or excitement. The only moments during the entire three-part story that raised my heart rate were scenes that required big arm gestures to climb on ladders, and even then, failure just meant trying again. Oculus even enables the bigger interactive moments to be turned off for a comfort-focused mode that is even less intense.

Therein lies the biggest issue with a “VR experience.” Market something as a “game” and there are certain expectations for the physical effort and 8-20 hours of time that will be required of the “player.” Similarly, call something a “movie” and someone will expect to sit back and watch for roughly two hours without having to move around. Use an amorphous phrase like “experience” and users won’t know what to expect, but will expect it to fall somewhere in the middle.

Instead, what I got out of each $10 episode of Vader Immortal was less than an hour of story/experience with relatively light interactivity, and zero need to revisit the main content a second time. My initial instinct was to feel ripped off, because I could have enjoyed three legitimately good theatrical movies for $10 each, or used the aggregated $30 toward a complete game such as Star Wars: Fallen Order. 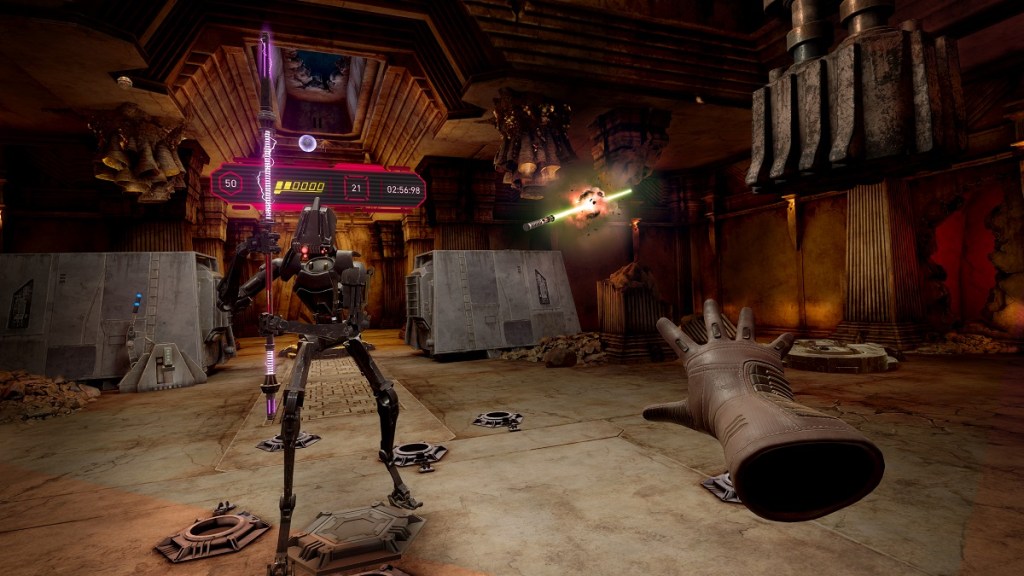 On the other hand, Vader Immortal’s $30 total asking price is about the same as what The Void was charging for its comparatively brief Secrets of the Empire location-based VR experience. And unlike The Void, which charges by the person, there wouldn’t be any additional cost for my kids or wife to try Vader Immortal — if they had any interest in doing so. As of now, they don’t, but that might change.

I have no idea how many copies of the Vader Immortal episodes Oculus has sold, but after 3,330 Quest ratings of the first part, there were less than 1,500 for the second, and fewer than 350 for the third. While each of the parts has a 4-star or higher rating, that suggests to me that most of the people who weren’t satisfied dropped off after the first part, leaving only the hardest-core Star Wars fans to keep buying episodes. If I hadn’t been interested in writing about Vader Immortal, I sure wouldn’t have spent the cash.

New Oculus Quest users might not have to. Oculus announced that it will be giving away all three episodes for free to Quest buyers over this holiday season, and my guess is that people who don’t have to pay for the three apps (or wait months between episodes) might enjoy them more, boosting up the ratings. Even if that happens, I hope that Oculus and ILMxLAB won’t be revisiting the Star Wars universe with further “experiences.” It’s time for a proper Star Wars VR game, and given the rapid success of Disney+, VR could be a great opportunity to expand the world of The Mandalorian.