Super Evil Megacorp’s mobile multiplayer online battle arena Vainglory has had a strong showing on mobile, particularly as an esport. A few well-known esports teams have gravitated toward it so far, such as NRG, Fnatic, Rogue, Echo Fox, and Immortals. And this past weekend, the Vainglory8 Autumn Season kicked off with eight European and North American teams battling it out for a chance to move on to the upcoming Vainglory World Championship in December.

Vainglory will also be featured alongside Blizzard’s hit card game Hearthstone at Amazon’s Mobile Masters Invitational later this year. The two are big names in the competitive mobile space, alongside Supercell’s Clash Royale, which saw the start of its own tournaments last year.

Cloud9, one of the Vainglory8 North American competitors, has already nailed down a spot in the championship after its victory at the Vainglory Summer Championship. Its captain, Gabe “Gabevizzle” Villarin, says that he thinks that mobile esports is only going to get bigger.

“I’ve been by this for more than two years now, and I really do think that mobile esports is the future,” said Villarin in a phone call with GamesBeat. “I know that PC rigs can cost around $800 to $3,000 for the top of the line. But everyone has a smartphone. It’s as simple as going into the app and playing the game.”

Ian Huston, the manager for Cloud9’s Vainglory team, agrees. He also notes that mobile games have a reputation of being “easier” or not as skill-based, which is a misconception.

“There’s a connotation that mobile games don’t involve the same mechanical skill, and people in video games really like to pride themselves on being mechanically skilled,” said Huston. “Sometimes it gets a bad reputation. But as we’ve found with Vainglory, there is an obscene amount of mechanical skills to be learned.”

Another misconception, Huston says, is that it’s simply a clone of Riot Games’s hugely popular MOBA League of Legends. Though Super Evil is working on a 5-on-5 version, Vainglory is at its core a 3-on-3 MOBA with a single lane. This is something that Huston says provokes different strategies and gameplay.

“It follows its own rules,” said Huston. “It has its own mechanics. It’s just a different game as a whole. There are things that are borrowed just because it is a MOBA. But you’re going to find all those things in MOBAs.” 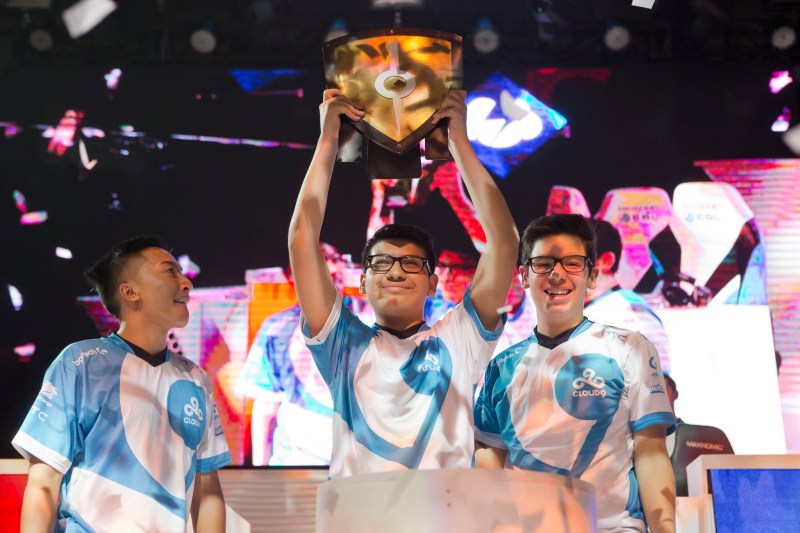 Above: Cloud9 receiving its trophy at the 2017 Vainglory Summer Season Championship. From the left: Gabe Villarin, Joseph Samano, and Gabriel Villamariona.

Vainglory runs on Super Evil’s custom-built E.V.I.L. engine, which cofounder and chief business officer Bo Daly says enables them to push out new features and updates much more quickly than if they were dependent on third-party software. It also helps optimize for cross-platform performance.

“Our code is architected from the ground up for very low latency, very performant execution, that allows us to be server-authoritative and support players all over the world at very large scale,” said Daly. “Part of what allows us to do that is having a shared code base that’s more reliable because the things that are happening on the server more closely mirror what’s going on the device. We’re able to share code between our iOS build, our Android build, and in theory builds on any other platform that we might want to run on in the future.”

The cross-platform aspect is especially important for esports events. Unlike in PC and console tournaments, mobile events often have players use their own devices. Heini Vesander, Super Evil’s marketing director and executive producer of esports, says that they aim to support as many devices as possible so players can use devices that they’re comfortable with.

“For us, it’s very important that our players can play on the devices that they’re comfortable playing with,” said Vesander. “In Europe we still have some players who like to play on the iPhone 5, because it’s a smaller screen. They feel like they’re faster at tapping the phone. Here, we see a lot more iPad players who feel like they get a better view.”

Cloud9’s team uses two iPads and a phone. Huston says that it can be something of an “arms race” as teams try to stay cutting-edge, but a benefit of playing on mobile is that their only real concern is whether or not a venue offers reliable Wi-Fi.

“A different team, with PCs or consoles, they have to rent out a space, or there might be a set time for them to go practice at the venue,” said Huston. “We don’t have to worry about that too much. We can set our own schedule while we’re there.”

Ultimately, Daly says, the goal is long-term engagement. They’re looking to grab their fans’ attention for 10 years, something that’s unorthodox for the mobile space. Vainglory exited beta two years ago with a player base that was 1.5 million strong, and Super Evil says its average engagement across daily active users is 85 minutes.

Vesander says that she thinks players will soon begin demanding better mobile gaming experiences, and that’s exactly what Daly and his cofounders are hoping to provide. They’re industry veterans, hailing from companies such as Rockstar Games, Riot, and Blizzard, and their goal is to migrate the complex type of gameplay you might find on PC to mobile. This includes longer play sessions.

“Everyone had a lot of data to look at that said three-minute games performed well,” said Daly. “But because no one had been bold enough to build a 20-minute match, there was no data suggesting we had a path to success there. It was interesting for us to be able to challenge the common wisdom there and build something fundamentally different than what we’d seen, typically, in the mobile space.”