The creator of the highly rated Valiant Hearts: The Great War video game is working on a new title called Lost in Harmony.

Videogame creator Yoan Fanise has teamed up with Grammy-winning producer Wyclef Jean to create a title that aims to pave new ground in musical gaming. Not many game developers have tried to innovate in the music genre, but Fanise is an indie creator who isn’t afraid to take risks.

Fanise revealed the game at the Tokyo Game Show in Japan. The title is the first since Fanise created Ubisoft’s Valiant Hearts, a moving tale about a dog that followers different human companions during the trauma of World War I. The game was a commercial success, selling 2.5 million copies. Fanise said in a statement that the new title is a moving story told through music. It is inspired by the films of Hayao Miyazaki and Akira Kurosawa. Fanise left Ubisoft to create his own game studio — along with his wife Anne-Laure Fanise, chief financial officer and cofounder — for the new game.

The gamer plays as Kaito, a young boy who is traveling the world on his skateboard with a girl named Aya. It’s a heart-breaking tale with an emotional soundtrack mixed from different genres from all cultures. The rhythmic music and gameplay are choreographed to “make you feel music in a totally new way,” Fanise said.

“The idea of Lost in Harmony came from my past experience of blending music into storytelling. Magic happens when you see how, without any word, without any language form, you can provoke feelings into a multicultural audience by playing the right melody,” said Fanise, creative director of the game at indie studio Digixart Entertainment. “I was frustrated to not find a musical game that brought this level of emotion, with characters you care about, with a story you want to follow, it was more or less always about rhythmic tapping, about squares and circles. By marrying my storytelling experience and the talent of world class composers, there is a chance that this game will touch people’s hearts.”

The game, coming in 2016, will feature an original song written specially by producer, solo performer, and songwriter Wyclef Jean, who has sold over 49 million records and has been creating pop culture music for more than two decades. 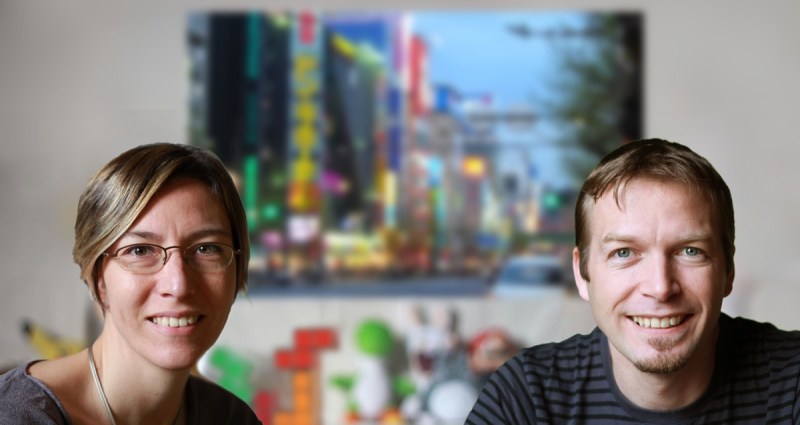 “To bring music to Kaito’s fantasy world was thrilling,” said Jean, in a statement. ”I wanted to write music that captured a moment in his journey that was both mystical and brave, and that could emotionally inspire the multi-national world that is video gaming and that Kaito lives in. And how cool do music for a game that uses music to communicate.”

Lost in Harmony shows the world through the eyes of Kaito, a troubled teenager who seeks to escape the fears of life and death. It’s a game that has something to say, Fanise said. The art style is a mix of artistic painted 2D and 3D.

The self-funded company is based in Montpellier, in the south of France, and it is targeting its games at consoles, PCs, smartphones, and tablets. It was founded in 2015, and it has five employees. Fanise, who spent 14 years at French game giant Ubisoft, said he set up the company to have the flexibility and freedom to create games on any subjects.

At Ubisoft, Fanise joined the company in 2001 to create the soundscape of Beyond Good & Evil, the legendary title directed by Michel Ancel, creator of Rayman Series and one of his mentors.

In 2004, he collaborated with Peter Jackson’s team on King Kong, the official game of the movie. Two years after, he was co-inventing the famous Raving Rabbids and their wacky language for the release of the Wii console by Nintendo.

He was then called to join Singapore studio to develop a whole new part for the Assassin’s Creed brand: the naval section. After the commercial success of all those titles, he was also somehow able to release one of the smallest, bravest games ever seen from a major publisher. That game, Valiant Hearts, is both a war game and fiercely anti-war at the same time, a story not about conflict’s heroics but about their tragedy and ultimate futility. It won many awards all around the world.

He left Ubisoft in March, and he wants to know if people will once again cry as they finish playing his next game.

“Video games have a role to play in our society beyond fun, its positive impact is more important than what we think,” he said.