Valve is inching toward normalcy with its newest Steam Controller prototype.

The Bellevue, Wash.-based game maker and distribution company introduced the latest version of its upcoming game controller this week. The new design ditches the touch screen and awkwardly positioned buttons sandwiched between the trackpads. In their place are a classic directional pad and diamond-shaped face button layout, similar to what you’d find on an Xbox or PlayStation controller.

“The latest version refines ergonomic aspects of the Controller by adding two diamond-patterned button layouts in the area previously designated for a touch-screen display,” reads a statement from Valve on the new prototype. “These analog buttons are offered in addition to the [track]pads featured in the original prototypes.”

The new form factor will enable developers to more easily add Steam Controller support to their existing games because it now more closely resembles other handheld gaming controllers. The directional pad may also help solve some movement issues, particularly in 2D games. (Some early Steam Controller testers reported awkwardness in moving characters around the screen while using the left trackpad.)

Valve announced it was making some changes to the controller at its Steam Dev Days conference back in January, but at the time, it only showed developers a rough mock-up image.

The ambitious gaming company is working with hardware manufacturers like Dell and Alienware to produce set-top boxes that run its new Linux-based operating system called SteamOS. The Steam Controller is part of the larger “Steam Machine” initiative, which includes television-friendly SteamOS software and third-party Steam Machines.

The original controller design (pictured below) was highly unorthodox, ditching the tradition handheld controller standards — analog sticks and a diamond-shaped face button layout — for two trackpads, a central touch screen, and 16 questionably positioned buttons. The new design is still a departure from the norm, thanks to the trackpads. Hopefully, it’s a happy medium between familiarity and innovation. 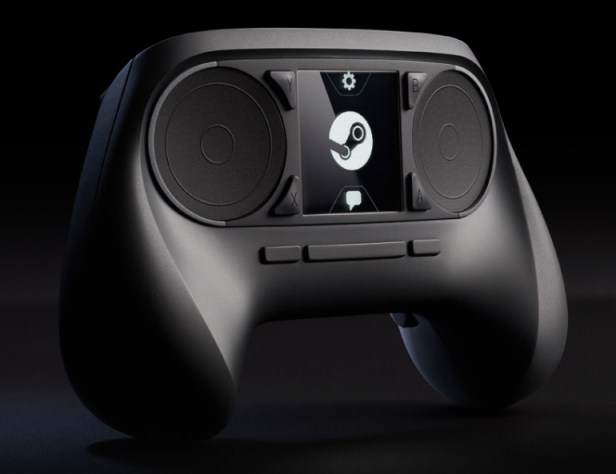