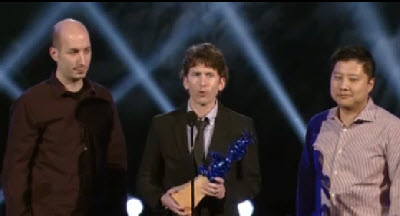 The developers, including Todd Howard, pictured center, thanks their wives and employees for all of the long hours working on the title. Skyrim, a fantasy role-playing game, also won for best RPG and Bethesda won for Studio of the Year

Shigeru Miyamoto, the creator of Mario at NIntendo, accepted the Video Game Hall of Fame award. The ninth-annual show, executive produced by Emmy Award winner Mark Burnett, seemed better run this year. Part of the reason was that a soldier in military fatigues was authorized to run up on stage and take down any speakers who went to long with their acceptance speeches. Then he “teabagged” them, or pretended to sit on their faces, going up and down, up and down. Robert Bowling, who accepted the award for best shooter game for Modern Warfare 3, actually ran off the stage as the soldier guy ran up. Bowling’s companion was caught and teabagged.

The show was broadcast live from Sony Studios in Los Angeles.