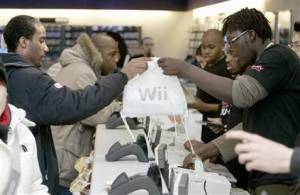 Video game sales grew nine percent in the U.S. in December. That’s relatively weak because of the slow economic environment, but growth earlier in the year was so strong that annual sales were up 19 percent at $21.3 billion, according to market researcher NPD Group.

For December, sales were up nine percent to $5.29 billion. Hardware in December was $1.88 billion, up two percent; software was up 15 percent at $2.75 billion; and accessories were up eight percent at $662 million. That’s a very good showing, considering how bad the economy is. Overall retail declined two percent during December.

Anita Frazier, an analyst at NPD, said that sales set a new record for the year for the game industry, whose sales in 1997 were just $5.1 billion. Now the industry can top that figure in a single month. In spite of this, there have been a lot of stories on layoffs and studio closings. Frazier said that’s because there are both winners and losers among publishers and manufacturers.

Even though Nintendo announced that a new version of the DS is coming soon, it still managed to break three million units in a single month for the first time with DS sales. That broke the record held by Sony’s PS 2, which sold 2.7 million units in 2002.

The top-selling game in December was the aging Wii Play title, which comes with a free remote control for the Wii, at 1.46 million units sold. Activision Blizzard’s Call of Duty: World at War for the Xbox 360 took the number two spot with 1.33 million units sold. Nintendo’s platforms had six titles in the top 10, while Microsoft’s Xbox 360 had three. Sony had only one title in the top 10: Call of Duty: World at War.

Some stories note that the music titles Guitar Hero and Rock Band may have saturated the music fans. But those titles saw their best month ever and accounted for 16 percent of software sales in December.

For the year, Wii Play came in at number one with sales of 5.28 million units. Nintendo dominated the top four sales spots, which together topped 18 million units sold. The top Xbox 360 title came in fifth place: Grand Theft Auto IV at 3.29 million units.

Microsoft reported that its lifetime sales of the Xbox 360 hit 28 million, up eight million over the PlayStation 3. But the Nintendo Wii has topped 40 million units sold. Microsoft said it has hit lifetime revenues of $13.2 billion, compared to $10.8 billion for the Wii and $6.1 billion for the PS 3. Overall, Microsoft said it sold 8.1 games per console to date. Xbox Live has hit 17 million active members, including 1.5 million concurrent players during the week of Christmas.

Sony said it closed the year with sales of 3.6 million PS 3s in the U.S., up 40 percent from a year earlier. While only 726,005 units sold in December, that number is up 92 percent from the previous month. PS 3 software sold six million units in December. For the year, PS 3 software sales are up 116 percent. The company’s top PS 3 games in December were Resistance 2 and LittleBigPlanet. The company said it has more than 17 million PlayStation Network users worldwide (though it didn’t indicate those numbers are active players as Microsoft did, meaning they played in the last 30 days). Overall, the company said those users downloaded 330 million pieces of content to date.