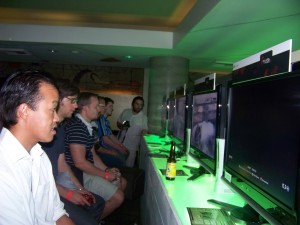 By most accounts, the E3 trade show in July was a disaster for the video game industry. (I liked it, because the crowds were so thin I could interview most of the bigwigs). But in recognition of the sorry show, the Entertainment Software Association is planning to announce tomorrow a redesigned format, according to Newsweek game blogger N’Gai Croal.

The game companies will now hold their premiere event of the year in the first week of June and make it open to the public for the first time. This latter development is welcome because game fans are usually the best at figuring out what is hot at the show. That gives journalists like me a better idea of what’s going to be the game to watch.

Croal reported that the location will remain the same: the Los Angeles Convention Center. He also said convention floor and meeting rooms will be open to journalists on Tuesday, June 2, 2009, while the show floor will be open to consumers on Friday June 5 and Saturday June 6. But a source familiar with the announcement says not all of the information reported is accurate. The ESA declined comment.

This larger-show format echoes the universal advice that observers such as Hal Halpin, head of the consumer-oriented Entertainment Consumer Association, offered to ESA President Mike Gallagher. Croal says that the ESA’s members are referring to the event as a “prosumer” show, meaning professional and consumer combined.

The show is targeting about 40,000 attendees, significantly more than the 4,000 or so who attended in 2008 but much less than the 70,000 attendees of 2004. After a hideously expensive show in 2006, the game companies balked at the budgets they had to lay out for E3. They experimented with a much smaller show in 2007 in Santa Monica for the press and analysts, and a similar small show this year at the Los Angeles Convention Center. But nobody liked the results, except me.

The big question for gamers: are they bringing back the booth babes? (Yes, quite sexist, but it’s no doubt the number one bemoaned problem missing from the show in the last two years).