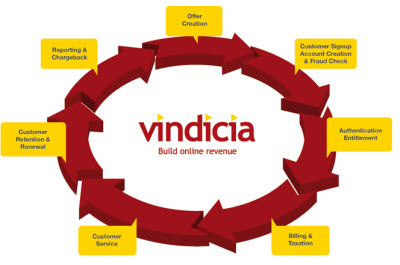 Online merchants want to widen their reach to as many consumers as possible. That’s why Vindicia, an online payments company, is integrating its service with prepaid gift cards created by InComm.

That may sound arcane. But this is a critical part of the ecosystem for online games and virtual goods. The latter is becoming a $1.6 billion industry in 2010, according to market analyst Inside Network. U.S. consumers have loosened up and are now willing to pay real money for virtual goods.

If there are more ways to pay, then there will presumably be more purchases and more profits for the whole social apps industry. InComm provides a way for people who don’t have credit cards or don’t like to pay online with them. InComm provides prepaid gift cards for all sorts of games and apps in more than 220,000 retail stores. InComm says its reach extends to a billion customers every week (that’s how many people walk into the stores where its cards are on display), and InComm contends it has 90 percent of the prepaid market.

Consumers can buy the cards and use the code that comes with them to make purchases online. Redwood City, Calif.-based Vindicia is now integrating those payment cards into its own CashBox billing system. Prepaid cards for games have grown 200 percent year over year for the past two years, said Brian Parlotto, senior vice president of consumer products and international at InComm.

Vindicia’s clients include Symantec, Activision Blizzard, Intuit and Atari/Cryptic. Vindicia was founded in 2003 by chief executive Gene Hoffman, who along with other members of the Vindicia team founded eMusic and sold it to Vivendi Universal. Vindicia’s billing system protects merchants from fraud, widens their reach, and makes sure that users complete their transactions without technical failures. Vindicia says that in the past year, its customers saw increases in customer retention of 10 percent to 25 percent a year. That resulted in the generation of $40 million in extra revenue for the customers. Vindicia’s number of transactions handled rose 45 percent in the past year.

Vindicia has 60 employees. Its rivals include Zuora, Aria Systems (which we wrote about last week), and Digital River. Vindicia tries to differentiate itself with a scalable automatic payment infrastructure. It handles more than 180 million transactions. To integrate CashBox into a merchant’s payment options, the merchant connects the Vindicia applications programming interface into the merchant’s web site. The merchants can customize the configuration as they like.