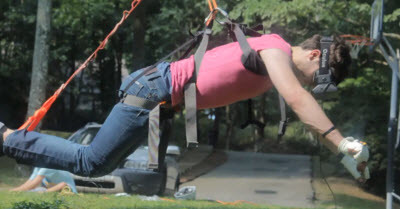 Above: Dan Borenstein with Oculus Rift

An 18-year-old college student has created a video demonstrating a cool skydiving demo with the Oculus Rift. The video shows how creative developers are becoming with their prototypes of virtual reality goggles from Oculus VR, which has raised a lot of money to make virtual reality the next frontier in gaming. It looks like VR’s comeback might have to do with enabling you to do things you can’t, or won’t do, in real life.

Dan Borenstein of New York told GamesBeat in an interview that he created the video and skydiving rig on a lark, after he saw the cool SkyDIEving demo created by developer nDreams. He said he had friends who enjoyed going skydiving, but he never wanted to try it himself in case his parachute didn’t work. So he hung a harness from a tree and set it up so he could bounce 15 feet off the ground. He stabilized the harness by tying a rope to another tree.

Oculus Rift, which has been shipping as a development platform for a few months now, is drawing a big community of developers — including id Software’s tech guru John Carmack, who has joined Irvine, Calif.-based Oculus VR full-time.

Borenstein said that the demo gave him that “stomach dropping” feeling, and he was queasy afterward. He wasn’t sure if the virtual reality goggles made him feel this way or if it was the sensation of bouncing up and down in mid-air. He made the rig even more realistic by turning on a giant fan underneath him. (That proved too loud for the demo though, so he didn’t film with it). With the goggles on, he could see just a single, 3D image. But when you record from the Oculus, you see the dual images that appear in the video.

Borenstein, an 18-year-old computer science student who goes by the name Vaecon on YouTube, bought two developer kits and has been experimenting with them. He shot the video with his friend Michael Forster and posted it on Thursday. Within a day, the YouTube video has gotten more than 10,000 views.

“I’ve been thinking of things that I would never do and figuring how to do them in virtual reality,” he said. “It feels lot more real and immersive if you do it with the goggles.”

“We were looking to create something that was a little bit out there, something tongue in cheek,” Dale said. “The demo itself is just that, a demo. We wanted to put that out there for people to try (if the have an Oculus Rift or not) and let them feedback to us what direction they would like to see the game take. For example, would players like to see a collection element added, rag doll physics, a sandbox where you could create your own jumps etc. It’s a really nice way of allowing is to get community feedback that could help shape the design of a final product.”

Palmer Luckey, founder of Oculus VR, said in an email, “Pretty awesome.  I always wanted to rig up something fancier for Tribes: Ascend that would lift you off the ground when you use your jetpack, and plop you back down when you land.  Props to this guy for actually building it instead of just idea-ing around!”

Borenstein said there are limits to the technology for now. He calibrates the goggles to make sure he doesn’t get seasick, and he takes Dramamine as a precaution.

“It’s an awesome experience,” he said. “I can’t say I would want to do a long session of gaming, but in terms of immersion, this is fun.”