SEATTLE — Philip Rosedale wants to build the Metaverse, the virtual reality experience depicted in the Neal Stephenson’s 1992 novel Snow Crash so many years ago. His first-generation attempt to do so was Second Life, the virtual world created by his former company Linden Lab.

Now, as head of VR startup High Fidelity, Rosedale showed off his second-generation attempt to build a metaverse in a virtual reality environment. Today, at the SEA-VR tech conference in Seattle, Rosedale showed an alpha version of a “virtual toy room,” where two people collaborated, long distance, from inside a 3D, cartoon-animated world where they could pick things up and talk to each other. Rosedale’s experiment is part of an effort to create a whole virtual reality industry, which tech adviser Digi-Capital believes will be a $30 billion market by 2020.

The experience was liked a stepped up version of Second Life, the virtual world that Rosedale debuted back in 2004 while at Linden Lab. Rosedale’s team used prototypes of virtual reality goggles and controls from Facebook’s Oculus VR division. With Razer Hydra controls (think of two sets of Wii Remotes) and an Oculus Rift headsets, Rosedale’s team was able to interact with the virtual environment using “18 degrees of freedom,” compared to just “2 degrees of freedom” with a computer mouse. There are just so many different ways to engage with the environment and be immersed in the illusion of a virtual world. 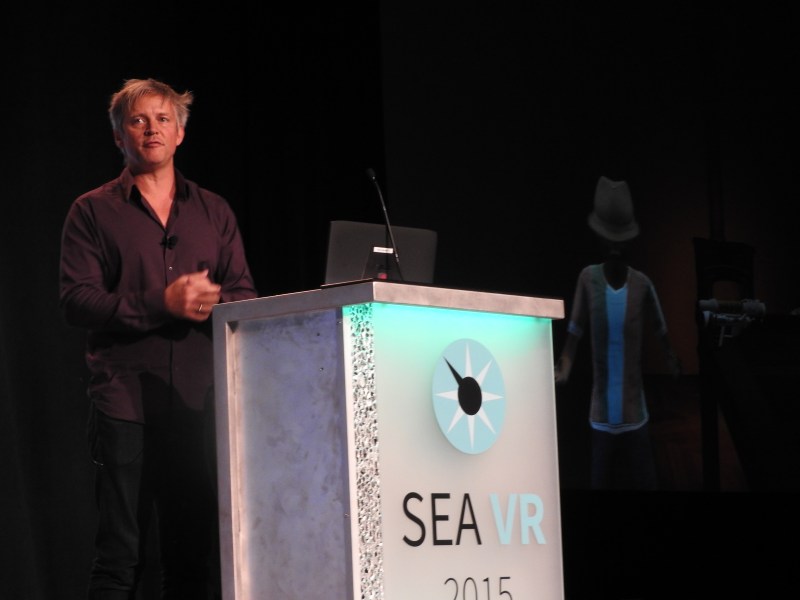 “Virtual reality is the next disruptor for society, after the smartphone and after the Internet,” said Rosedale, who started High Fidelity in 2013.

Rosedale believes that the Metaverse will be the destination for all things, with applications expanding far beyond entertainment and gaming. It will enable a global village for communication with a billion other people in the world, he said.

Rosedale believes the Metaverse will happen because the technology to do it is getting cheaper and more accessible.

“You can manipulate virtual environments in a natural way and communicate,” Rosedale said. “These virtual experiences are not science fiction. We are in alpha. It is starting to work. All of the components are there.”

He noted that his board of directors had a meeting inside virtual reality the other day. 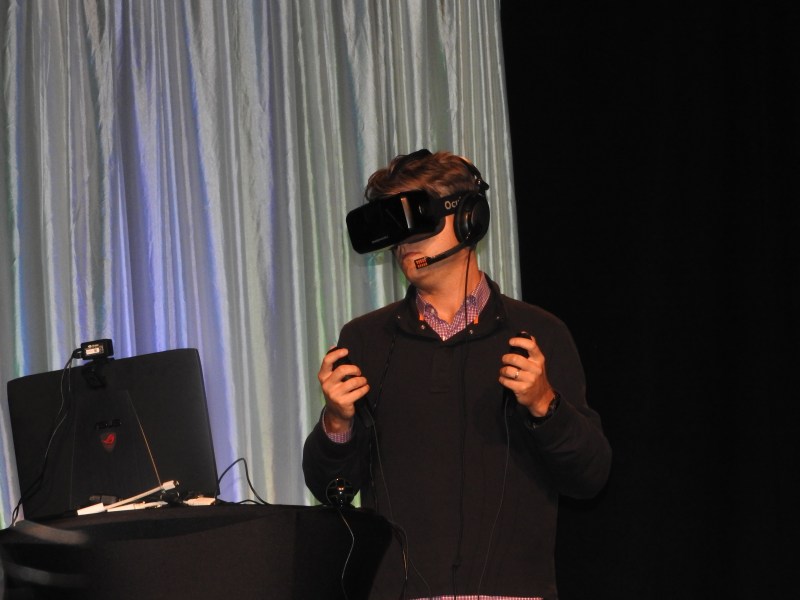 Above: VR demo of High Fidelity.

But it’s still a ways off before everybody will be able to step into the Metaverse. First, the experience has to be low-latency, or with instantaneous interactions. As you move, your avatar, or virtual representation of yourself in the animated world, should also move. It should also sort out matters of identity. For instance, if you visit your friend’s house in the virtual world, there should be some measure of privacy and your avatar should be wearing clothes.

The next generation of VR headsets will have “gaze detection,” or know where you are looking, and they may also recognize facial expressions. Over time, the High Fidelity team wants to create experiences that a lot of people can share at once.

“The experience will only be compelling if we can get thousands of people into one room,” Rosedale said. “That’s hard to do with today’s technology.” 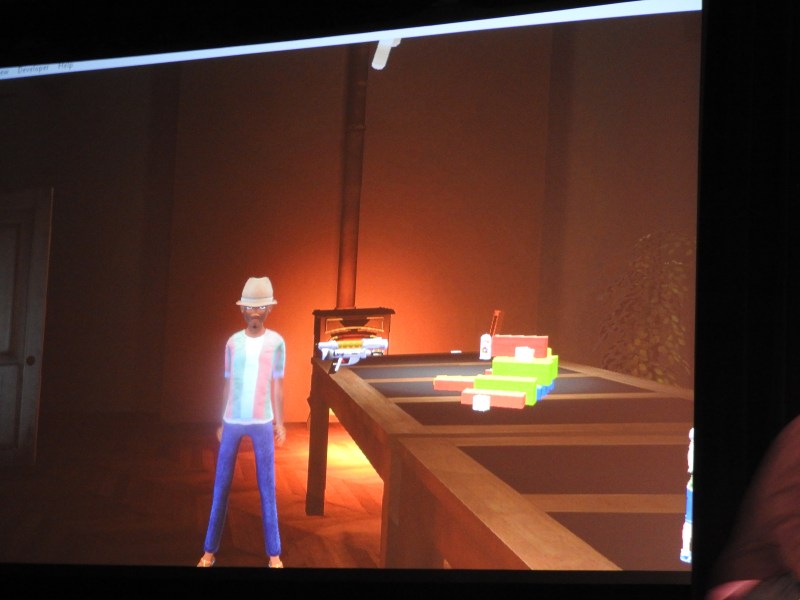 Above: VR demo of toy room in High Fidelity.

Right now, about 15 people can participate in the same room at the same time. Rosedale wants features such as identity, hyperlinks, shared content, infinite spaces, and large audiences.

High Fidelity also built a VR prototype where you can move inside a living cell and visualize what it’s like to be a tiny microorganism.

“Imagine a biology teacher firing this up and going into the cell with students,” he said. “The teacher can look them in the eyes. The students can’t read their cell phones. It’s a bit of a technology sanctuary.”

With time, money, and experience, VR worlds could be profoundly disruptive. Real world events will get more inclusive and interesting. 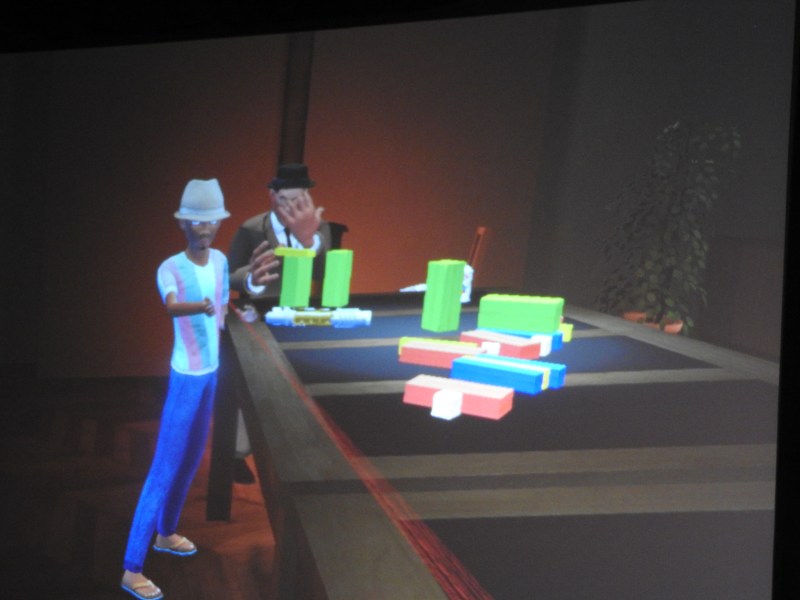 Above: Avatars can interact and talk to each other in High Fidelity.

“The revolution and exponential growth in 3D content will be mind-boggling,” he said. “If we have a Metaverse where people build things, it will be ten times more fun with this gear. We’ll be buying and selling virtual goods.”

The Metaverse will rapidly become a huge virtual space, and exploring it will become a pastime, much like it has in Second Life, he said.

Rosedale believes that we’ll be able to share all of the installed desktops in the world — a billion of them — to supplement the computing power of the world’s 1 million or so servers in data centers.

“We’ll have 1,000 times more machines available,” he said. “If you could use that, how big a Metaverse would that be? You wind up with the rich details of a video game. You get immense spaces with local details. If we use all these computers we have today, the virtual space could be the size of the land mass of Earth today.”

He added, “It would be totally editable. You could go into a space in virtual Siberia  and write on the wall and come back years later and find it.”

In conclusion, Rosedale said, “Much of our human creativity may move into these spaces. I think that it will. We will move into the Metaverse for much of our work, design, education, and play in the same way we moved onto the Internet. There is very little that stands in the way of that happening.”