Virtual reality is hotly anticipated in the wake of Facebook’s $2 billion purchase of Oculus VR. And that has enabled Virtuix to raise another round of $2.7 million for its Omni virtual reality treadmill. 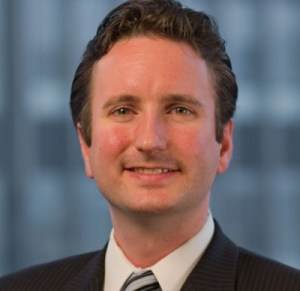 Above: Jan Goetgeluk of Virtuix

While Oculus provides the goggles to view 3D worlds, the Omni provides the motion input that allows you to physically walk, run, or jump inside a 360-degree virtual environment. It can make you feel more immersed in a VR application. The omni-directional treadmill is part of a growing ecosystem of peripheral technologies that are necessary to give consumers a complete virtual reality experience.

Jan Goetgeluk, the chief executive of Houston, Texas-based Virtuix, said in an interview with GamesBeat that the company will use the new money to continue research and development on new virtual reality applications even as it readies its treadmill for its launch.

“Virtuix’s mission is to take virtual reality beyond the chair,” Goetgeluk said. “This funding allows us to expand our markets and research. Gaming is our first market, but it is the tip of the iceberg.”

He said that other attractive markets include training and simulation for the military, law enforcement, and industrial applications.

“Three years ago, people had a weird look on their faces when I mentioned virtual reality,” he said. “Now, people realize it is an exciting industry. Sony, Samsung, Facebook-Oculus are all investing in it. And we have a niche that no other big player is doing.”

Virtuix has also added two new advisors to its team: Kai Huang, cofounder of Red Octane and a co-creator of the Guitar Hero series of music games; and Mike Griffith, former CEO of Activision Publishing and current vice chairman at Activision.

Virtuix previously raised a $3 million round in April to gear up for production of the commercial launch of the treadmill. The $500 treadmill hasn’t shipped yet and is a little behind schedule. But Goetgeluk said the company will show its final version of its hardware at the Consumer Electronics Show in January. Previously, Virtuix hoped to ship its units in September 2014. Now the plan is to ship it in the first quarter of 2015. That’s probably OK, since Oculus VR has also delayed the virtual reality headsets that could be worn with the Omni.

“Many people underestimate how hard it is to bring hardware to the market,” Goetgeluk said.

The treadmill could be used to enhance games, but it could also be used in fitness, tourism, and social gatherings, Goetgeluk said. It is aimed at getting you off the couch and actively moving around.

Virtuix previously raised $1.1 million in a Kickstarter campaign to launch the company’s development.

Goetgeluk founded Virtuix in 2013 though he began the research much earlier. Virtuix has raised $7 million to date, and it has pre-sold more than 3,500 Omnis.

“Virtual reality is a fast emerging, rapidly developing and exciting new medium for entertainment and other applications,” said Huang, in a statement. “The Omni plays a crucial role in expanding VR beyond a seated experience to an active, immersive one.”