After years in the wilderness, interest is growing in virtual reality. The turnaround has happened with the rising popularity of the Oculus Rift headset from Oculus VR, which raised $75 million from Netscape founder Marc Andreessen’s venture capital fund.

Jan Goetgeluk is the chief executive of Virtuix, the creator of the Omni virtual reality treadmill, and he hopes his company can catch some of Rift’s momentum.

But the $300 Oculus Rift isn’t necessarily the only thing you’ll need for virtual reality. The Omni treadmill helps you steady yourself and run around in 360 degrees of freedom inside a virtual world. It’s just one of the peripherals that could benefit if demand for the Rift really takes off when a consumer version of it launches.

Goetgeluk spoke in a session at our recent GamesBeat 2013 conference, and we also caught up with him for a chat after Oculus got its funding. Here’s an edited transcript of our interview.

GamesBeat: What are you doing that’s new and interesting with virtual reality? 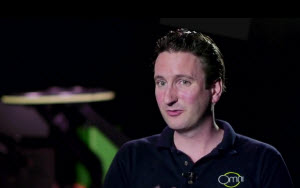 Above: Jan Goetgeluk, the founder of Virtuix.

Jan Goetgeluk: It’s been a good ride. We went to GamesBeat, which was a fun conference. We’ve done a couple of trade shows while continuing our development. Right now we’re doing a tour of Silicon Valley. We’re at NBC right now. We met with Robert Scoble. He loved the Omni. He and his crew are very excited. So far, so good.

GamesBeat: What stage are you at with the business?

Goetgeluk: Right now we’re raising up our production in south China. We’re about to start design for the tooling, get everything produced. We plan to ship the first unit some time in May of next year.

GamesBeat: How many of those are already preordered, going to the Kickstarter people?

Goetgeluk: Right now we’ve sold close to 3,000 at $499. A lot of that is from the Kickstarter, but we’re also selling Omnis every day on our website, funded preorders. Every day people pay the full amount for the Omni, even though we tell them they’ll have to wait another six months.

Above: Virtuix Omni Treadmill sells for $499.

GamesBeat: Everyone must be getting an Oculus Rift as well, then.

Goetgeluk: It’s a good question. Some of our backers haven’t bought the Oculus yet. They plan to just use the Omni with a screen in front of them. They’re waiting for the retail Oculus. But the Omni could work with any headset. There are probably going to be others coming to the market in the next 12 months, and the Omni will be compatible with any one of those.

GamesBeat: Are you showing anything new at CES?

Goetgeluk: If all goes well, we’ll show our integrated tracking solution there for the first time. Until now, we were still using the Kinect for motion tracking. The final product will have integrated capacitive sensors in the base, and we’ll do a sneak preview of that at CES. That determines the position of both feet on the Omni at any given time. You won’t need a Kinect anymore.

GamesBeat: What does the feet-sensing do? Does it determine your position in the world?

GamesBeat: We’ve seen a lot of excitement about virtual reality lately. You saw the big investment in Oculus. What are you sensing about the overall market right now?

Goetgeluk: We were very happy to see the investment Oculus got. For those who don’t get believe in it, [the truth is] virtual reality is here to stay. It’s a very neat experience – not just having the Rift, but having the Omni and walking around in a virtual world. It’s a leap in entertainment, that VR dream we’ve had for the last 20 years. The technology is ready.

GamesBeat: Does that give you any new opportunities for Virtuix itself? Do you want to raise more money or otherwise take advantage of this optimism right now?

Goetgeluk: Certainly. We had a $1.1 million Kickstarter campaign, so we made money there, but we’re talking to investors. That’s always important for a startup. We see a lot of interest in the Omni and virtual reality in general. Investors are starting to realize this might be the next big thing. We had the internet in the ‘90s and then social and mobile. Now we have this virtual reality wave, the next big wave of innovation.