Researchers say that older adults and others can benefit from brain-training exercises.

But it took Nintendo’s BrainAge video game for the handheld DS to break the market wide open. It led you through basic math-related activities and literature passages, pointing to research that said if you did such math and read out loud, your brain functions much better.

In a couple of years, the title and its sequels have sold more than 26 million copies, according to Nintendo. That’s something like a half billion dollar business.

Vivity Labs hopes to extend that market opportunity with Fit Brains, a casual games web site that allows people play games that help their brains in some way, VentureBeat has learned. Michael Cole, CEO and founder of Vivity Labs in Vancouver, Canada (pictured here), says that his company is targeting the older casual game players who may want to view their game playing as productive.

“We call it guilt-free gaming,” said Cole, whose company recently raised $1 million in funding from undisclosed angels. “We’ll go after the casual games audience that wants to keep their minds sharp.”

That’s a contrast to people like me, who want to turn our brains to mush. Actually, given the way my brain works these days, I might want to give Fit Brains a whirl.

The Fit Brains site is a combination of online games, brain fitness tips, and a social network that includes competitive brain teaser competitions. People can also play cooperatively, and they check out their rankings and achievements.

Competitors include Nintendo, of course, but it’s not very direct since Nintendo sticks to its own hardware platforms. The Brain Age games are based on the work of Japanese researcher Ryuta Kawashima. They include math and recognition problems that designed to keep certain parts of the brain active. The game was built in 90 days by a team of nine game designers. But it turned the game world upside down with its elegant simplicity.

The game has been credited with helping the DS outsell the competitor Sony PlayStation Portable by more than two to one. And it also gets credit for expanding the video game market to older consumers and others who have never played video games before.

I witnessed the appeal of Brain Age first hand, when everyone in my wife’s extended family played the game while on vacation, including my mother-in-law in her 70s. In one of the mini games, you look at pictures of coins and then add up the total amount. Then you decide whether the coins on the right are more valuable than the coins on the left, all against the ticking of a timer. 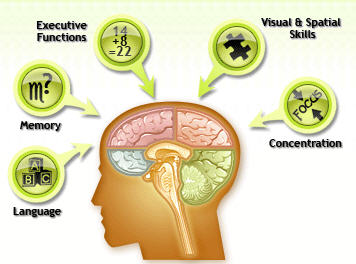 The first time I played it, I got a lousy score that showed my brain was 80 years old. But I steadily improved it. I never got to 20, the optimal brain age. And it was embarrassing that my kids beat me. It is possible to make a fun game that makes you think.

Vivity also hopes to tap into the expansion of the gaming universe and ride on Nintendo’s coattails. Closer to home in the PC casual games market, Luminosity also makes web-based brain-training games.

The company has four games up on the site now. A fifth is going up shortly. Cole says there are about 2,500 beta users since the soft launch two weeks ago. The games are free for now but a subscription to a premium service will be available in June when the site goes live. Premium subscribers can get metrics on how much their brains are improving.

Others have gone after this market before but not with video game experts who have a track record of making fun games. Too often, researchers try to create serious games that wind up being a drag to play.

The company has eight employees. Among them are Mark Baxter, vice president of product and former president of casual games firm Gnosis Games; Paul Nussbaum, vice president of science and a noted researcher; and Shawn Woods, creative director and veteran of THQ and Relic Entertainment.

Cole said it was the third time he raised money for a company and it wasn’t particularly easy. He said he had two offers from venture capitalists but turned them down for the angel funds instead.