Some exciting news for virtual reality: Data from VBProfiles shows that last quarter saw the largest amount of investments in the landscape in the last five quarters.

Compared to the same period of time last year, the budding industry has seen four additional investments and almost $588M more in funding — an increase of over 120 percent. While the total number of investments has decreased, with only 19 investments in Q1 2016 as compared a high of 32 in Q2 2015, the total amount of funding has skyrocketed, with more than $1 billion invested — mostly in Magic Leap and MindMaze. 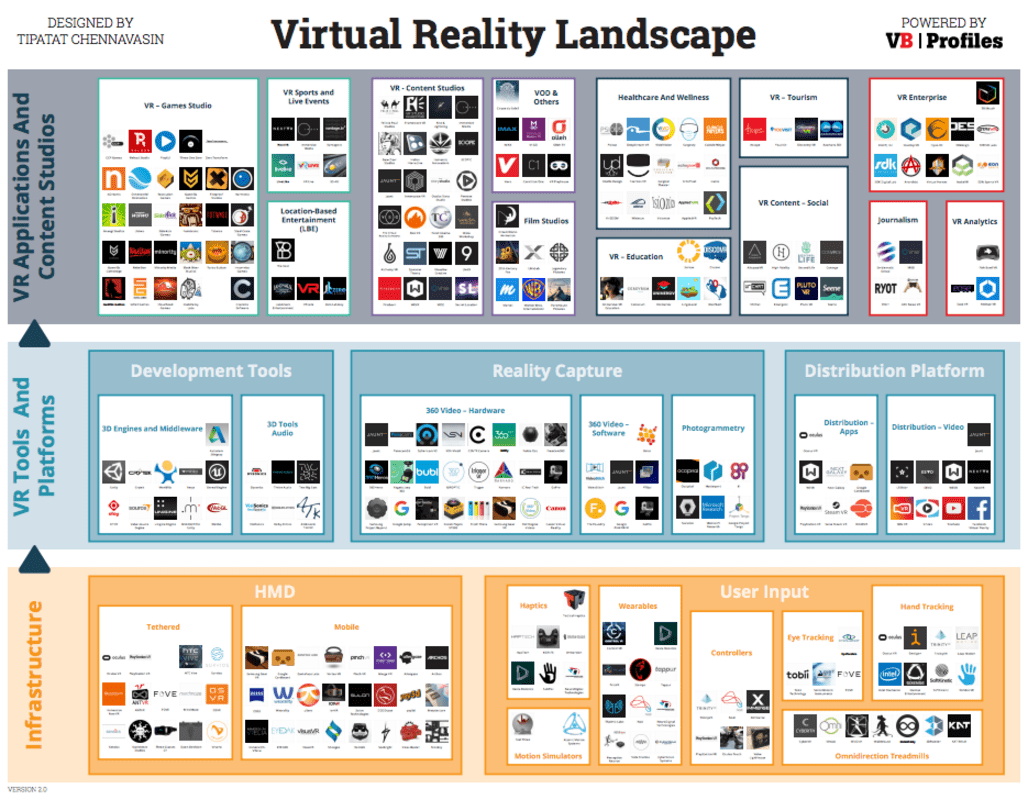 Above: Above: VB Profiles Virtual Reality Landscape. (Disclosure: VB Profiles is a cooperative effort between VentureBeat and Spoke Intelligence.)

(A high-resolution version of the VR landscape is available here.)

The funding “gravitational pull” of MindMaze is easier to understand than that of Magic Leap, since MindMaze, based in Lausanne, Switzerland, has already delivered a thought-powered virtual reality, augmented reality, and motion capture game system in MindLeap. It has also now begun to use VR to help a range of patients, including military veterans suffering from “phantom pain.” The company, whose board includes a some of the world’s leading doctors and neuroscientists, will apply its multisensory computing platform to numerous new fields, such as robotics or transportation.

Magic Leap on the other hand has not yet released even a beta version of its product – not even to developers. Apart from potential investors and advisers, it has allowed just a few to see or experience the gear in action. This combination of funding and mystery has fueled both curiosity and hype.

A significant aspect of Magic Leap’s is the result of the tsunami-sized surge of interest in the industry, with all the major players—Facebook, Google, Apple, Amazon, Microsoft, Sony, Samsung—having hundreds of staff dedicated to the platform. Facebook alone may have over 400 people working on VR. There are also some 230 other companies, such as Meta, the Void, Atheer, Lytro, and 8i, working on hardware and content for this new platform. At present, that tsunami appears to be headed Magic Leap’s way … whether this will persist remains to be seen. 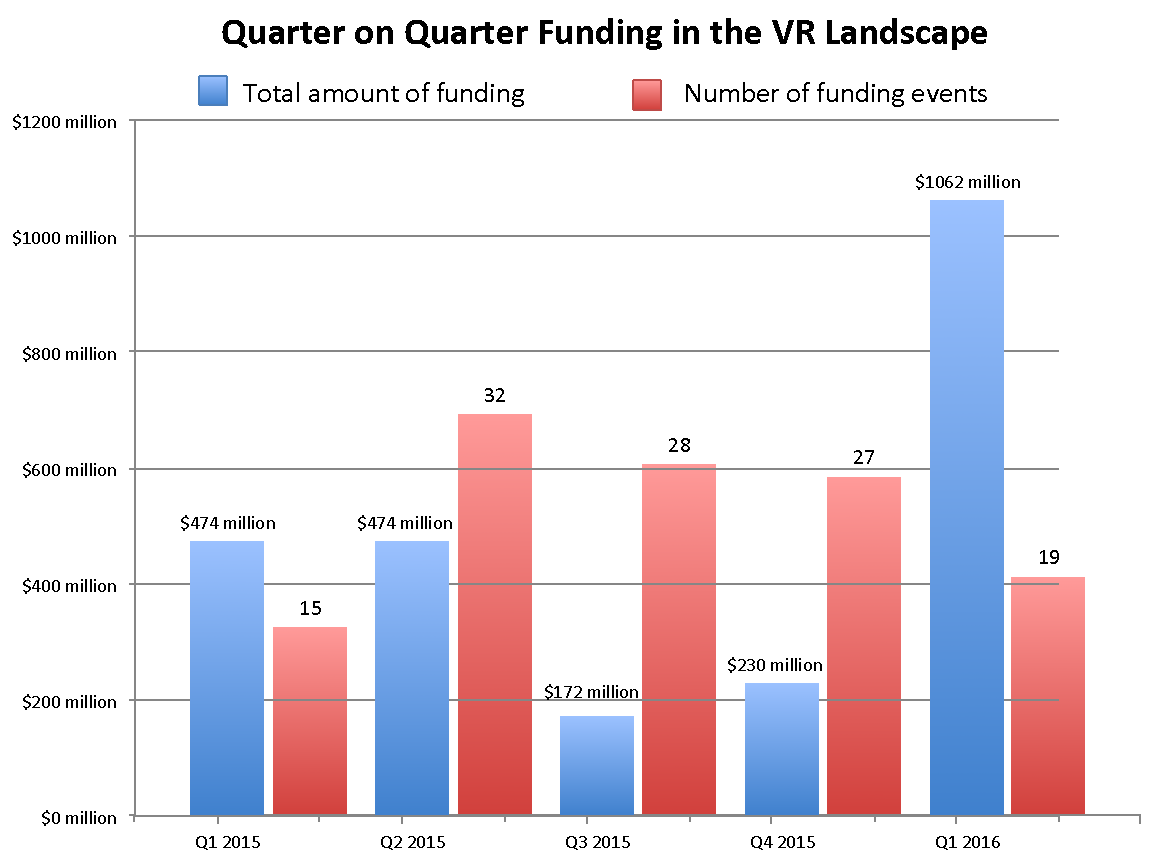 When looking at the top-funded companies, 10 account for over 75 percent of the total amount of money invested in the VR market, showing a clear concentration of funding. This is particularly true when looking at Magic Leap, which has successfully captured 43 percent of the $3.2 billion investments in VR so far. 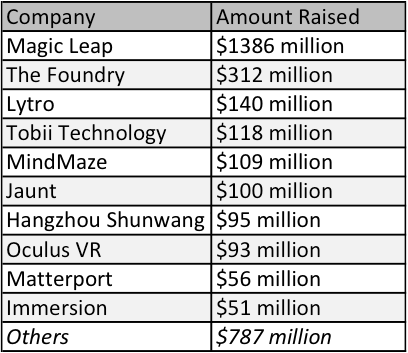 As you can see, Magic Leap is biggest winner of VR in terms of both investments and valuation. The AR/VR company raised a $794 million Series C led by Alibaba at a $4.5 billion valuation. The company still hasn’t launched a commercial product, only releasing a few videos of its technology. Some experts estimate that this valuation is a gamble, and predict that the price will drastically drop.

MindMaze announced it raised $100 million in February at a $1 billion valuation. The company brings together various technologies — VR, AR, motion capture & electroencephalographic (EEG) scans — to create a medical grade “neural virtual reality platform.” The company produces MindLeap, a headset capturing its user’s brainwaves to define what happens in the virtual world. The main use-case is to help stroke victims recover and retrain themselves, but the company plans to offer its devices to consumers at a lower pric. The CEO says that the recent funding will be used to explore additional medical uses for virtual reality, including other neurological problems such as post-traumatic stress disorder (PTSD), Parkinson’s disease, cerebral palsy, and autism.

Budget VR manufacturer Baofeng Mojing raised $35M in a Series B, showing how China might become a big player in the VR space. The phone-based headset only costs $30.

Another Chinese company, Deepoon, announced a $30 million series B led by Xunlei Ltd and Kaiying Network Technology Co Ltd this January. The company, established in 2015, produces VR head-mounted devices as well as content. Its content distribution platform has accumulated over 1.5 million users.

Starbreeze Studios, a Swedish VR content, publishing and distributing company, raised $25M from Smilegate to develop a co-op version the investor’s Crossfire franchise and publish it in Asia.

Wevr raised $25M to produce the YouTube of VR. The product, Transport, is still in private beta. It’s a VR platform where creators can publish their work. Both free and paid content will be on Transport app, available to users of Oculus Rift, Samsung Gear VR, Google Cardboard, HTC Vive, and PlayStation VR.

What does all of this mean for the public markets?

The evolution of VR is mesmerizing. As in the words of the Queen song “A Kind of Magic,” companies in the VR landscape offer “one golden glance of what should be.”

Gail Barnes is an entrepreneur and founder of a sustainability and social media startup who writes about virtual reality and artificial intelligence and has a passion for building online communities.