The “VR hype cycle” used to explain the relatively slow rate of adoption for VR refers mostly to the consumer market, and in large part the household-targeted segment, which I believe has suffered the most thanks to the false narratives that I outlined last month. Most of the chips have been bet on high-fidelity immersive content and when it comes to premium experiences, your home just does not serve as the best or most natural setting to clutter up with the necessary equipment and accessories.

The more fitting place is a location-based spaces, like a VR arcade. That’s why location-based VR experiences are currently trending in popularity worldwide while household consumer adoption is not. According to Greenlight Insights, global location-based VR entertainment will in fact double to $1.2 billion this year and grow to over $8 billion by 2022.

VR arcades are the first of the form to pop up, blooming particularly early in Asia thanks to the region’s popular backdrop of internet cafe culture, which serves as the ideal foundation. Western diets have understandably taken more time adjusting to the return of an arcade model that the market thought had otherwise gone extinct some decades ago. Not only are they quite alive, the pace of adoption is picking up.

VR arcades are no fad

“There are now over 100 VR arcades in the United States and they usually follow the same format. There are even more outside the United States, with the latest estimate that there are 4000 worldwide.” says CEO Ryan Burningham of Virtualities, a VR arcade based in Salt Lake City and one of the very first to take root in the US.

When you hear about the prohibitive nature of VR-ready equipment and accessories, the most cited factor to blame for poor consumer adoption is cost. That’s why, they say, traction is lagging behind forecasts and why location-based experiences are benefiting as a sort of steward model.

Maybe cost and the alternative of renting versus buying does play some appreciable role at the moment, but I think the point is exaggerated. The underlying reason why mainstream audiences don’t yet take VR seriously enough to dish out the dollars is actually due to a particularly poor product-market fit for premium content.

The real factors at work for why location-based VR is popular is because they offer the dedicated space for room-scale experiences and the increasing array of custom-designed hardware that allows our physicality to truly feel immersed.

In many cases, this will mean letting our bodies step outside of the usual anthropomorphic lens and, for instance, fly around as an eagle with wings above the skylines of New York City, as I was able to last month at the World VR Forum in Crans-Montana, Switzerland.

Zurich-based SOMNIACS‘ full body “Birdly” simulator required that I lay horizontal with my arms and hands strapped into mechanical wings that position, pivot, rotate and, yes, flap authentically like an eagle. My deep-seated fear of heights was triggered immediately but after a few sessions the phobia had abated. I couldn’t imagine a more apt approach to immersing my physicality into the experience than by having exactly this tailored hardware paired to the ride as a mandatory condition. 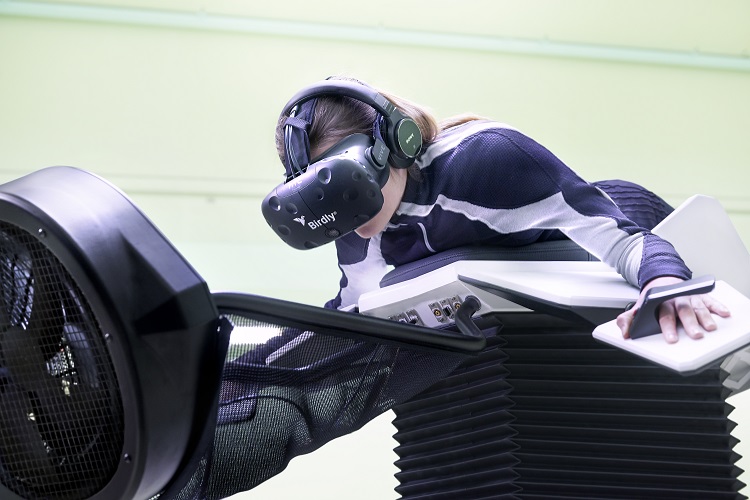 Anything less wouldn’t allow me to feel the quality of “presence” and to suggest that this hardware will be made available in your home is just not practical. At least not for some years. And why? Because the sheer number of experiences that will be created in the years to come will entail a proportional supply of custom-designed and personalized hardware that will be tailored specifically to the subtle and nuanced qualities of both the specific experience and the individual.

Other great examples that I experienced first-hand at the World VR Forum included Paris-based GoodGuys and Swiss-based Kynoa. GoodGuys threw me into a series of “6DOF VR modules” custom-designed for various extreme sports motion rides like Pro Race VR, Little Valley, Ski Ride, and Slide Drift. They partnered with E6Lab to develop the pods with servomotors at 6 angles and synced the hardware to an animation algorithm that syncs pitch-perfect to the real time CG and live content shot in 8K video at 60 FPS, which is the current highest video resolution.

Above: Pro Race VR by GoodGuys at World VR Forum

The team at Kynoa, for their part, took my nostalgic tabletop game of foosball and turned it into nothing short of a cinematic experience. Coined “Koliseum Soccer VR”, the game is particularly unique as far as mixed reality content goes, and is perfectly suited for showcasing how elevated social games become with an upgrade to 3D. The equipment (see cover image) looks ordinary enough at first sight, except that the top is enclosed like a blackbox, so you need to put on the HMDs in order jump into the virtual stadium, welcomed with roaring applause.

Interestingly, Kynoa plans in the near future on extending the competitive gameplay to creating leagues, online matches and tournaments, and so we see again the inevitable intersection between the mixed reality industry and that of esports. In the case of Virtualities, the journey to esports came about just as naturally. In observing their repeat customers, they catered to their demand by building their own league, called the “Virtualities Athletic League”, which has already held dozens of tournaments.

“We realized our core customers who always wanted to come back were playing the same type of games over and over again – stuff like Space Pirate Trainer, multiplayer zombies, etc. In location based VR right we estimate that big expensive free roam type experiences were getting about 1 percent return rates.” Burningham told me. “By contrast, these competitive VR esports players were coming back at around rates of 20 to 30 percent. That’s where we realized we needed to get serious about the league. We had been holding VR esports tournaments for almost two years now.”

And that was just the beginning. In parallel, Virtualities started cooking up their own esports VR title, codenamed Citadel, the alpha version of which is built on Unreal Engine and developed as a sci-fi 5v5 team combat game that they plan to eventually license out to VR arcades across the country and worldwide.

Then in May, they announced the launch of a 4,000 square feet Salt Lake City location dedicated to VR esports, where players can compete for prizes and glory, not sitting around like in traditional esports, but by breaking up a sweat in the more athletic variety that emerges only with the advent of mixed reality. The theme of needing large-scale space isn’t going to go away in the foreseeable future for premium VR experiences. It will not only become increasingly essential as VR esports takes off, but for the world of art, cinematic VR, and in the free-roaming journeys that are being developed for “immersive theaters”, as productions that allow you to literally step into the story.

Creators of theatrical immersive productions, like The VOID, offer a full-bodied experience that allows you to actually walk the hero’s journey, free-roaming as you follow the narrative along with a group of friends, family, or strangers that have joined you for the ride. Immersive theaters are proving hugely successful with Ryan Andal, President and cofounder at Secret Location, reporting at the VRLA in May that they get up to 40 percent occupancy rates versus the traditional film industry’s steady 11 percent.

It’s no storytelling, but “storyliving”, which strikes at the heart of what mixed reality is all about in the first place.

It certainly holds true for the experience I had last month when I was part of a group of six attending Somnai, a mesmerizing London-based production that does not simply hinge on VR gear but mixes and incorporates mixed reality along with a variety of other theatrical devices in order to create a hypnotic melange that facilitates a surreal narrative; guiding each participant step-by-step through a lucid dream that continually teeters on the edge of the unconscious. You can only truly understand the full potential of this category of mixed reality by trying it. 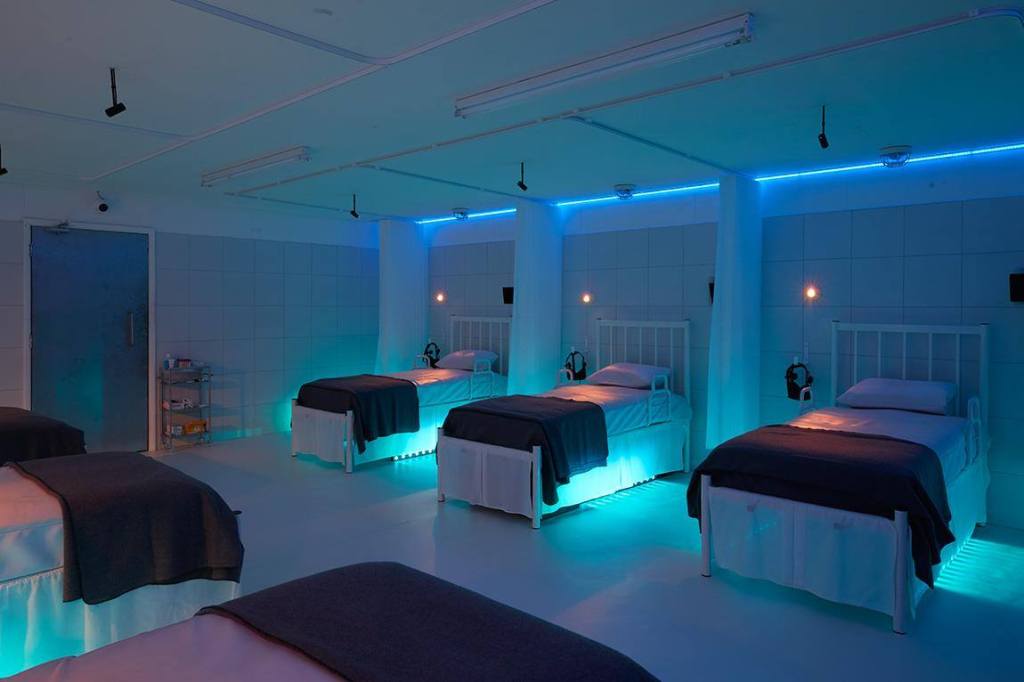 Above: Ready to dream in VR?

What is clear is that high fidelity VR content will increasingly and in large part necessitate six degrees of freedom to move, interact, and feel through the surroundings, and that will by default require ample stretches of space that are entirely devoted to it. While many categories of lighter VR and AR content will no doubt be suited for household consumption, you can expect that the flagship experiences will most certainly not be for what my spidey senses predict will be no less than a decade from now. So we better get used to location-based VR as a leading staple for the industry.