When you look at the historic rates of adoption of communications technologies that broaden our connections and how they keep moving us closer to the purest form of the experience, there’s a strong case for VR as the next big thing. I expect headsets to evolve toward a mass-market design over the next two to three years as manufacturers iron out issues such as screen resolution, weight distribution, and motion sickness. Then, with a market primed by the success of mobile apps, AR and VR applications will grow between two to three times the rate of mobile apps in less than a decade (see chart). VR applications will take off 2-3 years after AR applications due to the headset issues mentioned above. 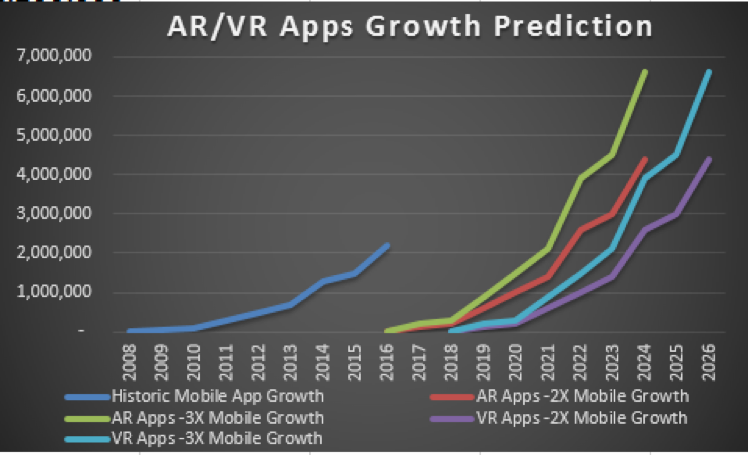 So VR is an eventual reality and growth is coming. The question for investors face is where to place the smart bets?

Meet The New King – Same As The Old King

One of the traditional investment targets is hardware. VR headsets are available in everything from cardboard to fully molded plastic shells. Eventually, this viewing technology will become commoditized, corded headsets will give way to wireless, and margins will shrink accordingly.

That said, sensors and semiconductors will continue to be the backbone of VR systems, especially as use grows and demand becomes more nuanced. And we’ll need plenty of sensor fusion software to stitch together multiple viewpoints into immersive 3D images.

But the really big opportunity lies in content, including sports, entertainment, gaming, and live productions. What if you could experience the Broadway play “Hamilton” without leaving home? Or a Drake concert? Or the NBA finals?

Those experiences will spur VR to take off at great rates and we’re investing accordingly. One of the companies in our portfolio, VokeVR, became the first to help deliver the NCAA Final Four semifinals and championship in a live VR stream. Other funders are following suite, including the seed-stage investors F50 and Boost VC. In just the last four years, Boost has funded 34 VR companies.

Investors are hardly alone in this positive outlook. Peter Gruber is the CEO of Mandalay Entertainment, a former movie studio executive, and a co-owner of both the Los Angeles Dodgers and Golden State Warriors. He’s putting millions into VR and calls it “the secret sauce of entertainment.”

Some of the biggest names in Hollywood agree with that assessment. Last year, Disney put $65 million into Jaunt, which provides professional-grade cameras for VR productions. Steven Spielberg is an advisor to The Virtual Reality Company. And Kavi Raz Studios, a maker of mainstream English- and Hindi-language movies is working on a VR film.

These efforts will help build familiarity with and momentum for VR. They will put it on a trajectory to be the next big construction project on the Internet platform. As it expands, VR will enfold what we think of as separate experiences. Social media, online chatting, video conferencing, project collaboration, Web browsing, TV watching – all will become subsets of the overall VR experience.

Where is this all going? Consider the premise of the startup AltspaceVR: to communicate in virtual reality. It reflects exactly the end state of VR. Yes, company’s current avatars look Second Life castoffs. And yes, they will have to do more than offer air hockey tables to draw an audience.

But to go back to Zuckerberg and getting to the purest form of the experience, it’s easy to envision VR can go in the next decade. Instead of controlling an air hockey paddle, imagine playing blackjack in Las Vegas without actually being there. Or designing a new office building in three dimensions and in real time with experts from around the world, all the way down to the tile pattern in the entryway.

In all of these experiences, video and VR will eventually become intertwined. Video-based communication is already growing on mobile devices through such technologies as Facebook Live and such applications as Gloopt, which lets people create and upload branded videos from their phones. It’s absolutely predictable that we’ll be viewing video in VR instead of graphics or static images.

The reality is that VR is a huge opportunity and that will emerge eventually – emphasis on the word eventually. Eyewear systems still need to sort themselves out. Communications networks need greater capacity and less latency. And the chicken-and-egg game between building a mass market and having something to offer the masses must run its course.

But in time, the world will have more virtual spaces than Web sites, spaces where people of common interest from varied geographies can connect, work, and play.

It will become bigger than reality itself.