Warcraft gaming fans, you’re going to be delighted by all the homages to the games’ universe in the movie.

Let’s set aside those not-too-complimentary reviews (though GamesBeat was much kinder to it). Fan response to the movie’s European release in public forums was immediate and powerful, likely due to the incredible amount of similarities between the movie and the game world. We’ve collected a few for you to watch out for.

Warning: Mild spoilers. We’ll give you this pretty picture of Durotan (Toby Kebbell, left) and Orgrim (Rob Kazinsky) to think it over before scrolling down.

Above: ‘Westfall looks nice. Maybe we should settle down here.’ ‘I don’t know. Those harvest shredders looked pretty mean. And I hear there are packs of bandits at Sentinel Hill.’

The cities will make your heart (and gryphons) soar

In long shot after long shot, Warcraft shows off the scenery that World of Warcraft players know by heart. You may have seen the screenshots from the trailer depicting Westfall and Sentinel Hill, with the zone’s tiny fields and haystacks and mechanical harvest shredders in the background.

Equal love is lavished on every landscape in the film. Dalaran is picture-perfect to the game, and even the camera’s gryphon-back approach mimics the circular swoop most riders take in entering the floating city, though it still hugs the earth in this time period.

Same for the Alliance capital of Stormwind, where the rooftops mimic those in the game and are colored to match the city’s in-game districts. The gryphon’s landing path (in that annoyingly placed little balcony) is precisely replicated in the film.

It’s a blast to see the tower of Karazhan in its glory days (as the game’s developers have threatened so often to show us). The site contains a major questline in the upcoming World of Warcraft: Legion expansion.

Black Morass, the site of the portal where orcs prepare to spill into Azeroth, looks far better than it did in the generally-reviled Caverns of Time dungeon. The portal itself is a perfect match as well, and the orc encampment around it features the stumps of trees felled by peons.

Humans in the film set a gratuitous meeting in a perfectly-rendered Goldshire, which I can only assume happened because either a) film director and World of Warcraft fan Duncan Jones wanted to show off what WoW might look like in IMAX HD or b) the leaders of Azeroth had just popped down the road from Stormwind to take in a show with naked, dancing night elves. (Nope, no views from inside the Lion’s Pride inn.)

You’ll see a million blink-and-you’ll-miss-it moments in ‘Warcraft.’ Like the harvest shredders, some go flash by almost too fast to see. Others are easier to spot. Things to watch for:

When traveling through the forest, our heroes pass by a Murloc next to a stream, and you hear the characteristic “mrrrrhglglglgl” sound.

At a significant moment late in the film, a character actually levels up. It’s a dramatic moment and well-integrated, so keep an eye out for the sudden gold sweep of light and the characteristic sound, as it looks like part of the normal special effects for that scene.

A meeting/summoning stone is tucked into the background in Elwynn Forest. No, we’re not sure why it’s in Elwynn either. Shhh. Dramatic license.

A book selected by Khadgar in the movie looks like every offhand tome your caster characters have ever owned, complete with the jewels on the cover.

Moroes has a significant role at Karazhan (that does not involve serving undead guests).

On the first approach to Karazhan, you’ll swoop over Nightbane’s terrace.

Gryphon animations — all of them — are taken nearly perfectly from the game.

During an epic fight between Travis Fimmel’s Anduin Lothar and a huge orc late in the film, a winning move mimics a new animation from the World of Warcraft: Legion beta, which Jones saw and decided to add, Blizzard representative Vanessa Vanasin said.

Speaking of that beta, what used to be the central courtyard of Dalaran in beta now looks like a chamber from the film. Or perhaps it’s vice versa.

If you watch closely in the background of one scene, you can see evil warlock Gul’dan chatting with the big bad guy Mannoroth from the Warcraft games.

During one dramatic moment, you’ll hear the orcs chanting “zug zug” toward a major character, the classic phrase used by orc peons everywhere.

The wizard Medivh turns into a raven, a nod to the Warcraft III introductory cinematic.

You’ll see the orc Orgrim wielding the mighty Doomhammer, of course, but look closely: It doesn’t bear the Frostwolf clan logo… yet.

Orc construction everywhere shows the same architecture as the games — sentinel towers, huts, you name it.

During a few of the large battle scenes, the camera pulls back and shows an overhead view extremely reminiscent of the Warcraft strategy games.

In the scene-setting just before a dialogue in the dwarven city of Ironforge, a dwarven hunter pauses at the top of a cliff overlooking the city, in a moment very reminiscent of the original World of Warcraft opening cinematic.

Keep your ears open: Many of the games’ iconic soundtrack themes make appearances in the film, especially when entering new areas, and the “For the Horde! For the Alliance!” roars recorded at BlizzCon a couple years back are clearly audible in key scenes.

Stormwind guards appear to be exact replicas of World of Warcraft’s favorite NPCs. 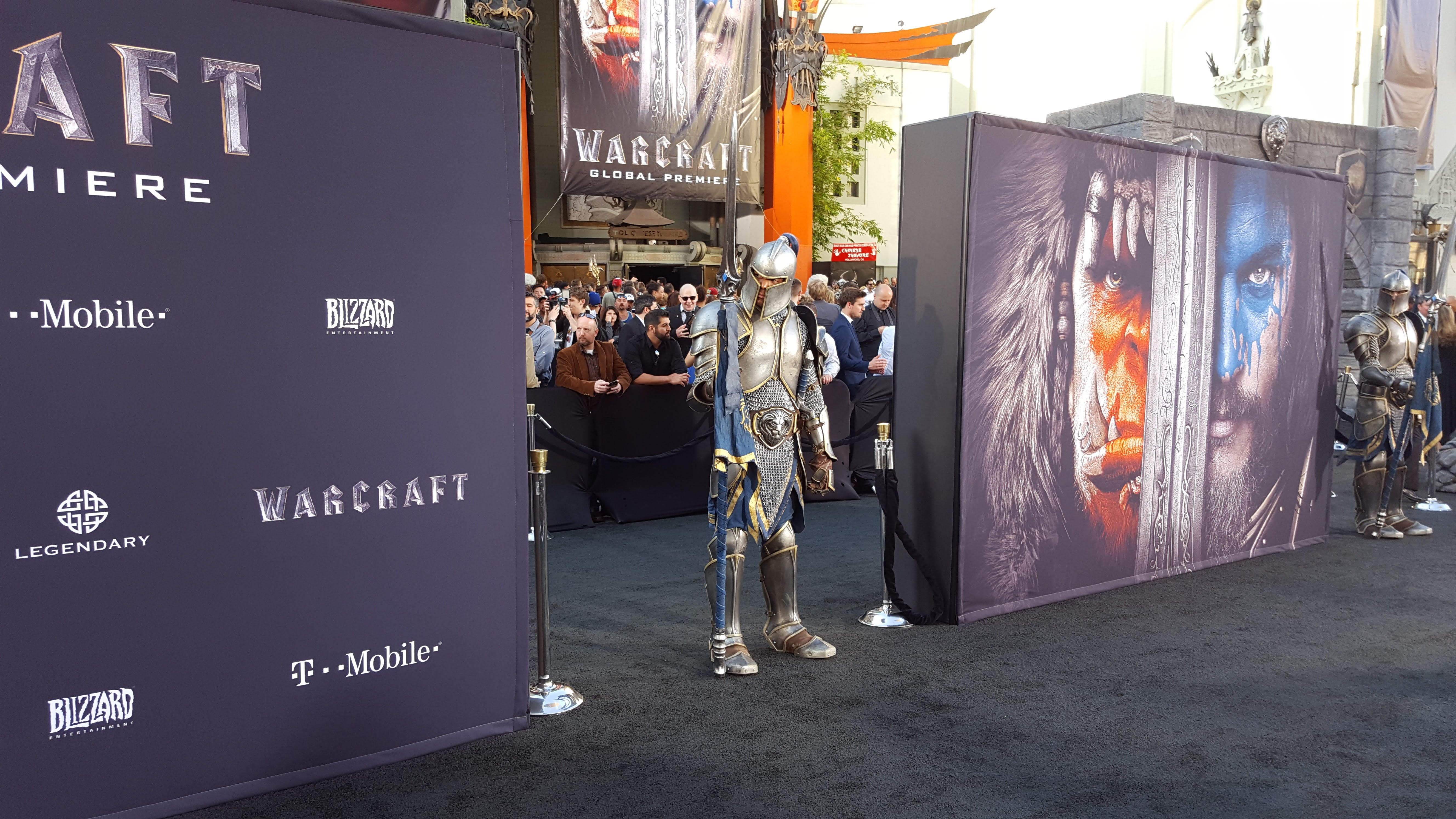 Above: ‘You need something?’ Actors in Stormwind guard costumes at the Warcraft U.S. premiere.

An uncredited performance not to miss

In mid-film, Khadgar consults with a character referred to as Alodi, a half-elf who was the first Guardian of Azeroth. His staff, Ebonchill, will be the frost mage legendary weapon in the upcoming World of Warcraft: Legion expansion. In the movie, however, that relationship is not made clear; and the part is actually played by an uncredited woman: Glenn Close.

That’s led to some speculation that the movie might be combining two characters: Alodi and Magna Aegwynn, the next-to-last guardian, who also happened to be Medivh’s mother.

In either case, her few lines make a nice surprise.

An iconic spell that makes non-Warcraft fans scratch their heads

In a moment late in the film, Khadgar’s mage “sheeps” someone. The audience at the premiere was split: Those who had played the games roared. The rest just looked puzzled, and Vanasin said that some focus group viewers have questioned just what exactly that turning-someone-into-a-sheep thing was all about.

Not only does the animation look exactly like the game, but Khadgar delivers two terrific lines immediately afterward, and they’ll be hard to hear because of the audience response. Hint: One of them is, “It only lasts a minute.”

What’s different between the movie and the games

Industrial Light & Magic created the spell effects throughout the movie, and they were frequently jaw-dropping. The film had a signature spell look that does not appear in the game, loops of light that look and move like smoke, but we’re not going to be complain — the result was gorgeous.

Portals were particularly impressive. While the glowing runes on the ground looked very much like those in game for some NPC portals, the ports themselves were pointed arches of swirling light, held aloft by the mage at the center, whisking away actors after they stepped in, rather than the glowing-hands, oval-thing-to-click-on game version. Keep your ears open for a hint of the original sound effect, though.

It’s just as well the in-game version doesn’t hew closely to this one. Without the oval to see where you’re going, we would see many more deaths due to falls from deadly portals high above the earth at the site of Dalaran Crater.

Above: Khadgar (a terrific Ben Schnetzer, left) casts a portal with Lothar (Travis Fimmel.) ‘Sure, we’re totally going to Stormwind. Why?’

The other major difference comes toward the end of the film, when you see the elves on the Alliance council for the first time. They’re not the night elves you expect. Draenei prisoners shown briefly earlier in the film are near-exact matches for the magic spacefaring goat-people, in contrast.

The reason is simple, Vanasin explained: It’s possible that we’re not looking at night elves at all. During the movie’s time period, Highborne elves might be on the council, and it could be that it’s their super-bright eyes and cracked faces we’re looking at.