Warcraft III: Reforged comes out today, bringing the classic real-time strategy game back to the forefront years after the original’s 2003 release. But remaking such a beloved title wasn’t an easy project for Blizzard.

Reforged has to both replicate the experience of the original Warcraft III while modernizing its look and infrastructure. I talked with with Reforged producer Pete Stillwell and animator Keith Sizemore. They looked back on the development process for Reforged and the challenges that they overcame.

GamesBeat: How does it feel to be ready to release?

Pete Stillwell: It feels great. We have literally years of anticipation building up. There’s always a few nagging bugs that are like, we might never fix this. And then for whatever reason, the day you go in to have the release candidate for ship, that bug gets fixed and you breathe a big sigh of relief. You realize things are going to be okay. You did all the hard work for a reason. Everyone is pretty hyped. We all love this game. We’re hoping that by having it live on Battle.net, people who are new to the franchise, or that have loved WoW for a very long time, can see the origin story.

GamesBeat: What did you learn from the beta test?

Keith Sizemore: At least on the art side, we got a lot of feedback from the community that we really appreciated. It brought a lot of things to our attention that we addressed and tackled. A few examples — at least for me, we fixed the animation for Samuro, and also we fixed the Mountain King. There were a lot of things the community brought to our attention. Coloring and saturation. Silhouettes. We had the opportunity to bring all that to the game.

Stillwell: The archer is a prime example. We had made her stand tall and proud, while her original silhouette was kind of waiting to shadow meld, essentially. By having her stand up, it made a huge difference for silhouette readability. More from the engineering side, there’s so much you don’t know until the game is live, when you’re making an online multiplayer game. You have to get it out there and — we’re lucky to have a dedicated, passionate community who helped oppose the weak points in the matchmaking or in the server infrastructure and things like that. They can help make this game a better representation of the experience we want for the broader world.

GamesBeat: What have been some of the biggest changes you’ve made during development?

Sizemore: The [color] saturation, for one. We like how we’ve adjusted that, to make sure that characters are more readable, in response to the community’s feedback. We did a pass on the grunts. We had more of a desaturated grain early on, kind of hearkening to the cinematics. We found that the community didn’t feel that read true to the original orc grunt and the other orc characters. We did a saturation boost on that, and it definitely helped.

Stillwell: It really brought their skin to the forefront. That’s one of the fun parts about this. There’s a right and a wrong answer sometimes in game development, and in this case, it’s better to know that the community has a strong feeling about what’s right, and then adjust. Ultimately we are here to maintain a classic, so some of those creative licenses, if you will, and walking them back — I think we were comfortable with that.

We always enjoy seeing how deep the community’s understanding of the game is. Other things we’ve changed since the start — we benefited from having the foundation of the original. There was the core sense of maintaining that. Not much evolved as much, as we figured things out as we went and discovered how we should deliver the game to the community, versus how we thought we would deliver it as the beginning. 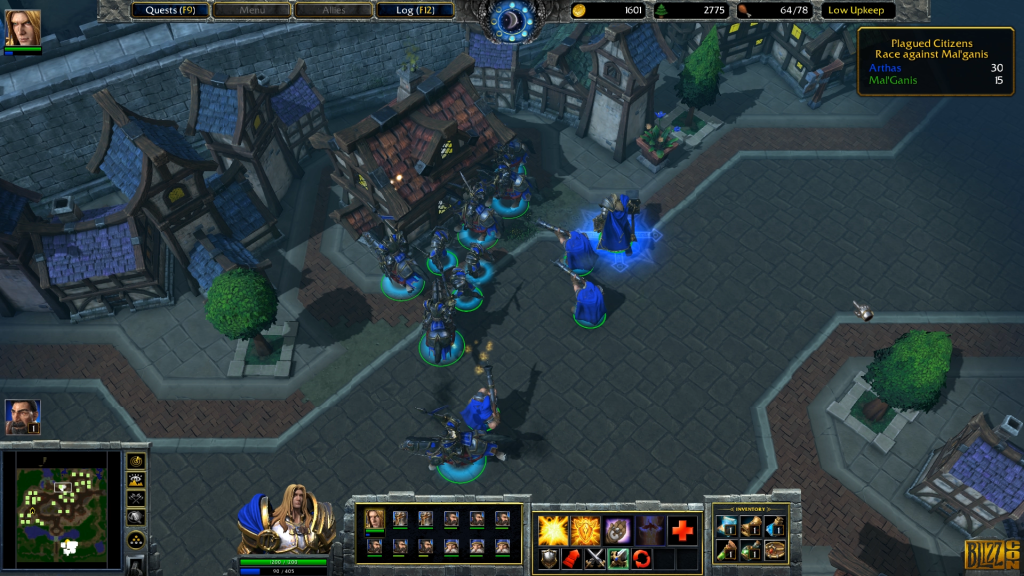 Above: Warcraft III: Reforged in action.

GamesBeat: What is support for this game going to look like after launch?

Stillwell: One thing that we love that the StarCraft II team has done has been seasons and finding ways to engage with the online experience long term. The campaign is the campaign. It’s a snapshot of the third war and it’s amazing. We don’t necessarily have much to add there at this point. Whereas the online community and the folks who’ve never set down, whether it’s competitive play or custom games — they’re thirsty for more. They have ideas. I can’t undersell how deep the backlog of requests is from mapmakers, for new things we could be doing. We dipped into that, but the first thing we had to do was get the game right. We’ve gone through that process by getting the campaign right. We’ve added to the editor and we’ve served some of those requests, but we mainly had to do the types of things that helped the other side of the team get the campaign right. Now we can overindex into the — I want a trigger that does this. There’s a memory leak here, so if you figure that out you can help us debug and make maps faster.

One of the really strong things about the world editor — it’s like a good game. It’s super easy to fall into and understand how to put a map together, and then you start the learn the depths of it and figure out over time how little you really know. There’s a lot to get good at in there. Because of that depth, there’s some sharks in the water, if you will, that we have the opportunity to go fix. Keith and the art team made hundreds of assets that were duplicated in the original game unique, because we knew that that would be cool for the campaign, but it would ultimately put all of these new opportunities in the hands of creators. The really awesome news we’ve just gotten is this deal with ESL to have more representation in esports. That means we can do more with seasons and having fun things for players who want to play alongside their favorite pros.

GamesBeat: I was going to ask about esports. You’re partnering with ESL for Reforged, although in the Blizzard has done a lot of its esports internally. Why partner with a company like ESL instead of going more on your own?

Stillwell: As a classic team, we’re kind of small and light. We look for partner groups and pursue those opportunities. They were rip-roaring and ready to go. They came to us with a strong proposal, and we thought, yep, this feels good. The players will benefit immediately. We can see where things go. That’s the cool part about it. Hopefully Reforged attracts some new, exciting pros and evolves what this game is. That’s the other fun thing. The community still agrees that this game has changes that could be made to competitive play vis-a-vis balancing. When we got SC, it was kind of like, okay, we agree that this game is perfect, don’t mess around with it. Leave the game the way it is.

Whereas the narrative on this one is, hey, Undead is super-underpowered, and you only ever really select one hero. We’d love to see more things mixed up. Skip and some of the designers have introduced new items in the last balance patch and done some cool changes to maps to make sure the maps themselves are balanced, because they have such a role in gameplay itself. There’s a lot to explore here. By letting us focus on the game itself while someone else gets it into the hands of the viewers, it’s a great relationship for us. 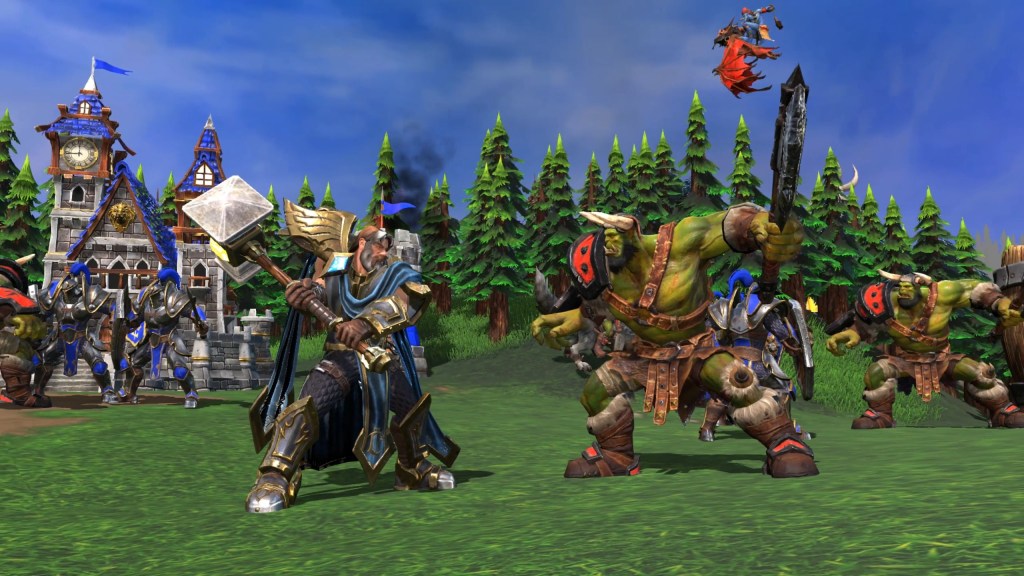 Above: Humans vs. Orcs.

GamesBeat: Warcraft III has been around for 20 years. How do you approach making this worthwhile both for people who are experts at the game and people coming in fresh? Do you have to keep those players away from each other in things like multiplayer?

Sizemore: I can speak to the campaign, where bringing in new players allows us to have this mode where people can go in and experience a lower tier of difficulty, experience those cool moments. They can go from playing WoW to finding out where the origins of WoW came from. That will bring something to the new players. For the multiplayer and the melee, by building on top of the original engine and progressing from there, we’ve maintained what people love about everything at the roots.

Stillwell: In the beta we had to be pretty lax with matchmaking in order to make sure people weren’t sitting in queues for hours on end. What we saw was a lot of people that were new showing up and they got stomped by veteran players. So when we go live and we have more people, we’ll start using our new ELO system that’s based on what we’ve learned from SCR and SC2 to find you a good match. Hopefully there’s a natural progression from “I picked up the campaign and I love it, I want to play more, I want to learn about this melee thing,” and then on the other side of the room, you have the veteran, and they’re just playing other veterans. New guys are playing new guys and we’re all learning together about how to advance into top-tier play without being overly frustrated by not — the game is different, right? With the hero system, there’s a lot more to learn than just figuring out a build order. A different map might want you to use a different hero.

There are layers of complexity here that I think are why the game is so compelling and such an opportunity for esports. It now looks as good as it plays, for a modern audience. I don’t want to make it sound like it didn’t look good when it came out. We respect the original developers. But hopefully, also — we did this at BlizzCon. We challenged the existing community to help us by being the best ambassadors they can. We all agree that more people are better for this game. Help teach them. Be patient. Help bring them in. There are thousands of custom games, us versus the computer, that aren’t as nerve-wracking as the ladder and things like that. There’s a bunch of cool stuff to discover where new and old players can join forces.