GamesBeat: Going back to custom games, what is curation going to look like?

Stillwell: I don’t think it’s our job to necessarily be pushing things at this point. I think the community self-selects. What you see rising to the top in popularity is the result of a lot of people playing that, and that’s what we’ll continue to expose. We will have reporting and things like that to help curate things that shouldn’t be there, that are inappropriate and things like that. We built new tools and mechanisms like that to help the community curate, to self-select what they want to see or don’t want to see. But by and large I guess the short answer is it’s still kind of the wild west. Go and explore all the cool new stuff. We hope that game you just created is the next big thing, the next cool MOBA map or whatever. That, to me, is the real power there, that we hand the keys to the community in a lot of ways and they can do awesome stuff with it. 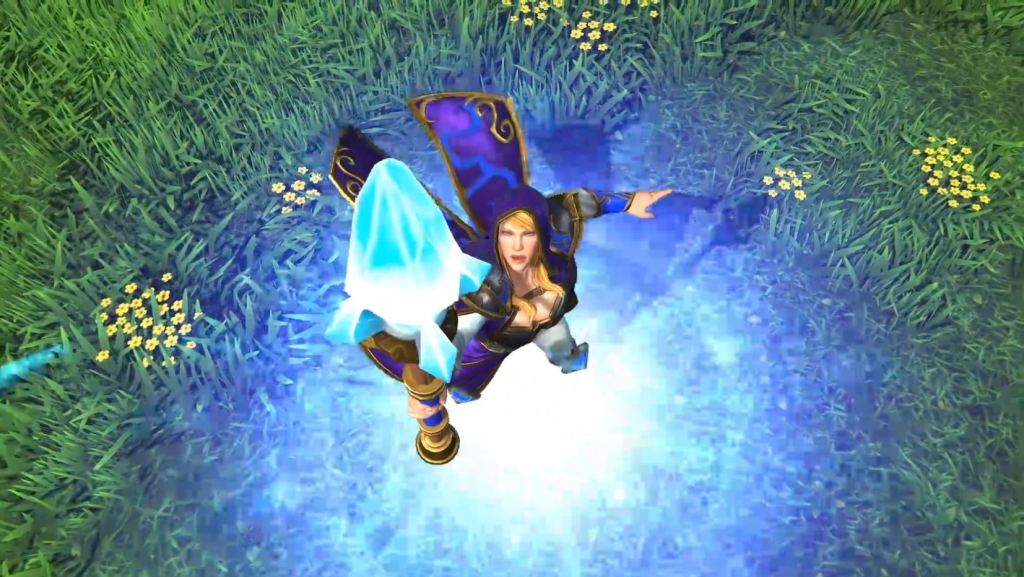 Above: I cast a spell on you!

GamesBeat: Are you interested in going back and remaking Warcraft or Warcraft II?

Sizemore: I love Warcraft, and so whatever opportunity there is available to me as an artist to work on Warcraft titles, I will snatch it up, because Warcraft III was a pleasure to work on.

Stillwell: I’m with Keith. I’ll do anything in this universe. I can’t speak to our immediate plans. I’d love it if we could come to BlizzCon and have a cool announcement about what’s next. Right now, as I touched on, I think we’ve done an excellent job with the campaign. It’s ready for the masses to come and reconnect with this game, or discover it for the first time. What we’ll do in the immediate future is continue to service that online community and put our efforts into being reactive. We got a lot of good feedback from the beta, but we’re going to get even more from the broader audience, as we go live. We’ll want to address those things and make sure that those folks want to stick around for another 20 years.

GamesBeat: What you really want to do is remake Warcraft Adventures, right? [Big laughs] We’ve been seeing a lot more Blizzard games coming to console lately. Is there any hope for that with Reforged, or is it too complex for that kind of platform?

Stillwell: I wish there was a way to bring really — I wish there was a way to bring the essence of the experience of RTS to console in a meaningful way. I’m not smart enough to have that answer. Blizzard tried it with StarCraft 64. Mixed reviews on that one, if you talked to the devs who were involved in that. I don’t personally see a way to do it. I would love if we could figure it out. Maybe the short answer is, thanks to Twitch and the other platforms where you can watch this game from your Xbox One or whatever, there is now more of a connection than there’s ever been.

GamesBeat: How are you reflecting on this project?

Sizemore: I’ve learned how to respect the games of the past as we rebuild them. Being younger in the industry myself, you don’t often have the opportunity to revisit the past with a lot of titles. You’re usually looking toward the future, with newer engines and newer techniques. You never really have a chance to go back and see exactly what those creators put up with, what the limitations were like at the time. I have a fond respect.

Stillwell: I’m a game developer because of this game. Getting to have any attachment to it, in this capacity, is next to overwhelming. That’s the selfish part that’s awesome about this. Like I touched on earlier, the real joy is meeting other people that, like Keith, have a similar story, why they’re at Blizzard and why they’re on this team in particular. But then also getting to rub shoulders with [Warcraft III pro player] Grubby, or with the mapmakers that we go meet in China, or — this scene has brought people around the world together in a way that I can’t fathom. Having shared experiences with people that don’t even speak the same language, but when you see this game it moves you in the same way — it’s so powerful. I love that, and I love that Blizzard gave us the opportunity to do this. Hopefully it’ll show the power of that experience to more people.