Warner Bros. hasn’t produced a critically acclaimed Lord of the Rings video game yet, but it’s taking another crack at it with the original story and concept of Middle-earth: Shadow of Mordor. It’s going to be a bloody mess in an unrelentingly dark world, much like Warner Bros.’ recent Batman games.

The story-based open-world game builds upon the lore that served as the backstory to J.R.R. Tolkien’s The Hobbit and The Lord of the Rings, but it relies upon brand-new characters and settings that weren’t dramatically shown in either the books or the Peter Jackson movies. It’s a big risk in that respect, one that could pay off handsomely if fans buy into the extension of Tolkien’s fiction.

After all, The Lord of the Rings has sold more than 100 million books, and the Peter Jackson’s movies, including the new Hobbit series, have generated well over $4.7 billion in revenues at the box office. If the video game is a hit, the Tolkien universe will become a true “transmedia” empire.

The resources dedicated to the project are impressive, and the action is centered around a bloody Batman-like fighting system. Monolith Productions, the creator of F.E.A.R. and other Lord of the Rings game, is the developer. And Wikia is creating a companion app dubbed Palantir, which automatically tracks where you are in a game based on the sounds it detects. The app, available today, will show you facts about that part of the game on the screen of your smartphone or tablet.

The single-player-only game should come out in 2014 with a Mature rating for Xbox One, PlayStation 4, Xbox 360, PlayStation 3, and Windows PC. 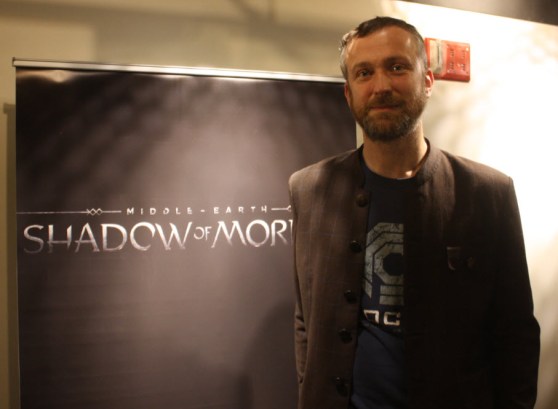 Above: Michael de Plater, design director of Middle-earth: Shadow of Mordor, by WBIE.

Michael de Plater, the design director at Warner Bros. Interactive Entertainment, recently showed the title to GamesBeat and other press in a briefing. He said the game is set between the events of The Hobbit and The Lord of the Rings. The player is a Ranger named Talion, who is killed alongside his family and then is returned from the dead by a mysterious “spirit of vengeance,” or a wraith that resembles the Ringwraiths of the trilogy.

“You will create your own unique personal enemies, missions, and personal stories within Mordor,” de Plater said. “You make the choices about who you want to go after, how you go after them. It will be different for every player.”

The game opens as the Black Captains flee Dol Goldur in the forest of Mirkwood, where Gandalf leads an expedition against the sorcerer named the Necromancer (who is really the evil Sauron in disguise). Sauron retreats to the land of Mordor, where his captains attack the Rangers, or scouts of Gondor, who keep watch on the entrance, the Black Gate. The player becomes Talion, who awakens from the dead and tries to seek revenge against the forces of evil. Players uncover the mystery of the spirit that compels him forward. The whole sequence is told in a series of cinematics, and then the real gameplay begins.

The title has next-generation 3D graphics and an open world with a feature dubbed the Nemesis System. In the world, every enemy’s face is a unique individual with a unique personality. Gone are the nameless orcs that you slay by the scores in previous Lord of the Rings games. These enemies have strengths and weaknesses. They are shaped by their encounters with Talion; if the Ranger mangles an orc in an attack, that orc will bear scars later in the game.

“We use the Nemesis System to bring Mordor to life as a living world,” de Plater said.

Each encounter will lead to the creation of a personal archenemy for Talion. Players have to outthink each unique enemy as they infiltrate the ranks of the orcs and, through the spirit that drives Talion, take possession of orcs on a quest to turn the enemy against itself. The dynamic world remembers and adapts to the player choices, de Plater said.

Talion picks up the superhuman powers of a wraith, which allow him to execute brutal melee assaults, flee from pursuers, and turn orcs against each other. You can get enemies to assassinate, terrorize, spy, or sacrifice themselves in suicide attacks in order to clear a path for Talion. Over time, you develop your skills, abilities, and weapons.

“Like Frodo’s Sting, you can build up your weapon and its legend over time,” de Plater said. “It’s like a gameplay-based crafting system, where your weapon becomes different based on who you go after.”

Christian Cantamessa, the lead writer for the award-winning Red Dead Redemption game, is the writer behind the story.

“The story is something that we are really excited about and will dive deeper into it later,” de Plater said.

The visuals look superb on next-generation consoles. The hair of the characters is noticeably realistic. The landscapes are beautiful, and the orcs look properly hideous. The bloody beheadings of enemies are quite gruesome.

In the scenes we saw, Talion moved stealthily through Mordor and came upon a shantytown ruled by a slave-master orc named Ratbag. He slays a few of Ratbag’s minions and then squares off with Ratbag himself. When the orc runs from view, Talion can move to “wraith view,” which enables him to see all enemies even if they are hiding. Talion shoots an arrow through the fleeing orc’s leg and pins him to the ground.

Talion approaches Ratbag and, using his wraith power, takes possession of him. He then figures out who Ratbag’s boss is and can go after that enemy, who is a boss character in the game. That boss is a bodyguard to a war chief, who is our eventual target. Essentially, the game takes minor orc characters and turns them into major archenemies, following the pattern of Peter Jackson’s approach to the Hobbit films. 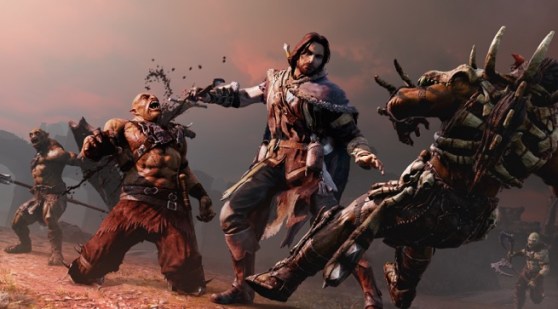 Above: The combat is bloody, earning a “mature” rating.

The lesser enemy leads Talion to the boss. Talion commands Ratbag to attack the boss in a suicide assassination attempt. The boss is wounded but survives. Talion then can confront the boss in a big melee battle. If he succeeds, he slices off the orc’s head in a choreographed beheading.

The fighting has plenty of slow motion for the player to make key decisions. It is intentionally built on the Batman games that have been hits with gamers. Talion gets an edge in each fight by converting some orcs using the wraith power. Those orcs attack their brethren, and then Talion moves in. As always, the fractious orcs create a lot of opportunities for the hero to exploit. If you identify a “squealer,” then Talion can capture that orc and force info out of him. But you don’t want to kill the squealer before he lets loose his secrets.

The fighting is visceral. At your most powerful moment, you can smash an orc’s head with your fists. The wraith lets Talion hide in plain sight if the orcs become too numerous. You can attack the enemies in any order. If your first try fails, you can try a completely different approach the next time. Once you take out a war chief’s bodyguards, he may run. Then your battle becomes a hunt. 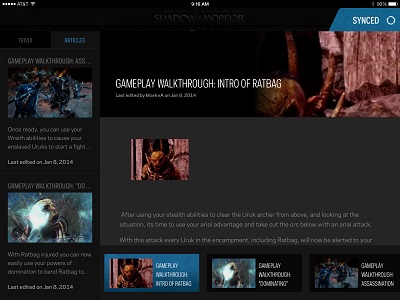 The scenery of Mordor is miserable, in contrast to previous Lord of the Rings games that have beautiful Elven palaces and lovely scenery. The game will be unrelenting in that respect, but you’ll be able to rescue citizens of Gondor and communicate with them.

The weather system varies, with big rainstorms that add a lot of realism and a dark mood to the game. The world will have iconic locations such as the Black Gate, the valley of Udûn in Mordor, Mount Doom, and Barad-dûr, the Dark Tower. Peter Jackson’s special effects teams helped with the design of characters and landscapes in the game.

“The world is a hellscape,” de Plater said. “It is a mature game, and we wanted it to be visual.”

As for the Palantir app, it was created in a collaboration between Warner Bros. and Wikia, which has created the official community for the Lord of the Rings movies and games. The community can create the lore that the app presents to the player. And when your smartphone is in a Kinect-like listening mode, it can automatically identify the spot in the game where you are and then display lore about that scene on your smartphone. The app is out now.

Taken together, both the Shadow of Mordor game and the Palantir app show that Warner Bros. is willing to invest heavily in both innovation and extending a popular game universe in a big way. We’ll see if the gigantic fan base finally gets what it wants and deserves: a great Middle-earth game. 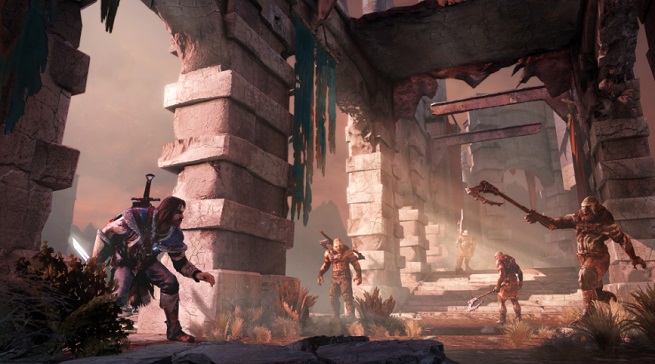 Above: Stealth is important in Middle-earth: Shadow of Mordor.