Check out our Review Vault for past game reviews.

The world is finished.

Cold War politicians emptied their missile silos after World War II, and only a tiny fraction of the population survived. Food and water are scarce. You are surrounded by pockets of radiation and goons that want to drink from your skull. The Internet never existed. It’s time to take stock of who your friends and enemies are and ultimately decide who lives and who dies on your road to survival.

This cheery world is Wasteland 2’s reality. Brian Fargo, creator of the original Wasteland and executive producer of its spiritual successor Fallout, released the game after several years of crowd-funded development. Wasteland 2 comes 26 years after its predecessor’s release.

I followed what I believe to be the main or major storyline for the game. Wasteland 2’s story is not at all linear, and players can do pretty much whatever they want from day one. I progressed through the Desert Ranger’s primary quest line, which is about 60 hours long depending on side quest choices, for the purposes of this review. 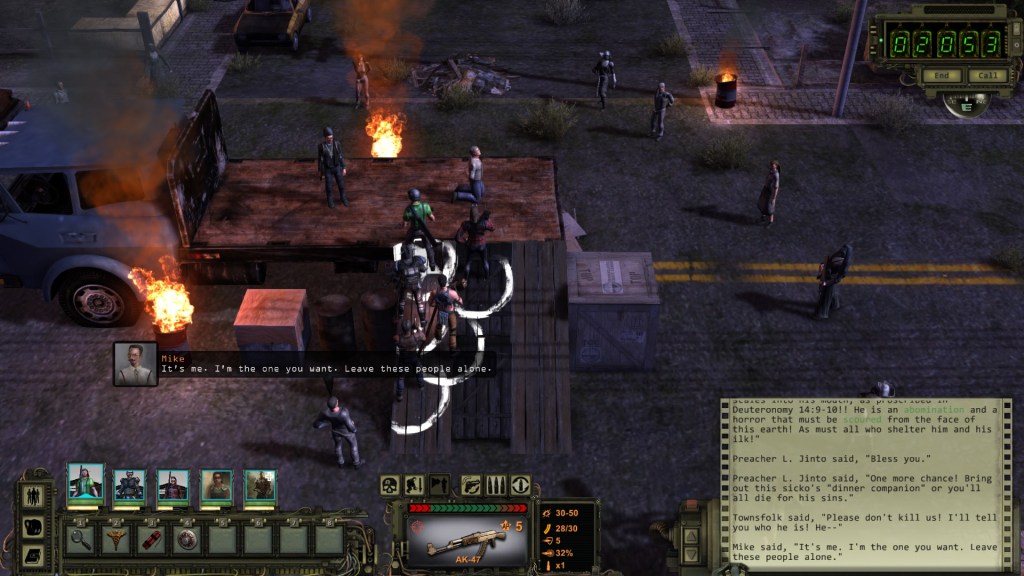 Above: Just a public execution on the streets of Santa Monica. Nothing to see here.

Post-war life is shit in Wasteland 2

Too many post-apocalyptic worlds found in games are more akin to 24-hour summer camps than Hell on Earth. Titles like Fallout: New Vegas and Dead Rising portray the end of the world as a party where people enjoy the lack of rules and structure. Sure, people die every now and then, but we are all having fun in a life with no rules.

Wasteland 2 does not. Everyone you encounter, even the people who appear to be partying, hates their life. They’ve all lost family and friends. They need supplies and have turned to eating dogs and sometimes people to survive. Many of them wish for death and eventually kill themselves in front of you. Desperation surrounds you at all times.

Players command a squad of Desert Rangers, law enforcement units spawned from a corps of army engineers sent to Arizona to build bridges after World War II. After the bombs went off, they turned a prison into a base and began to re-establish order in the region. Your first mission is to investigate the killing of Ace, a high-ranking ranger torn to pieces by an unknown foe.

That is, unless, you don’t want to do that. 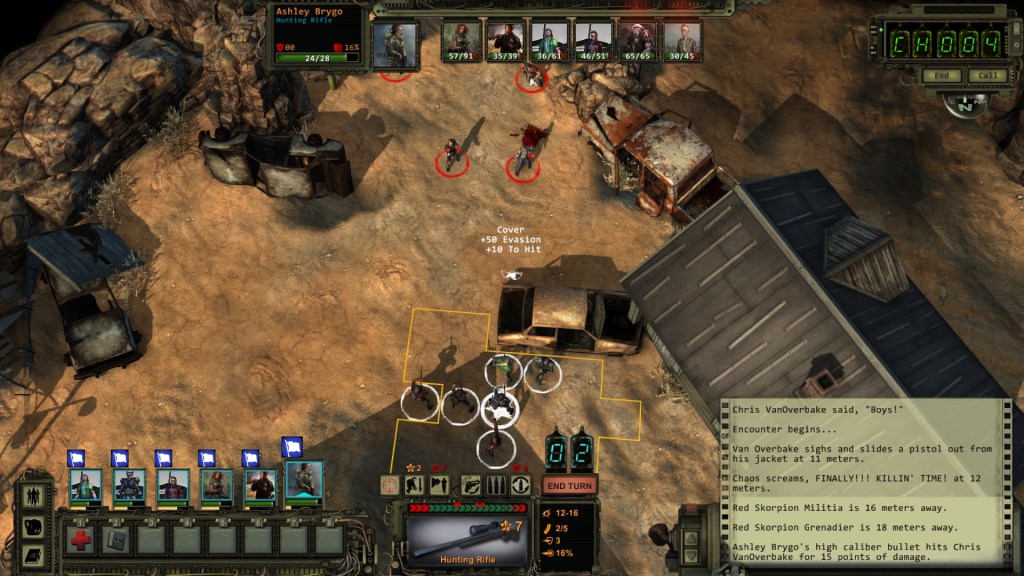 Above: A well-placed grenade would make me a very upset squad leader.

Here’s an example: The game picks up with a gorgeous live-action movie narrated by General Vargas, the Patton-like leader of the Desert Rangers. He gave me a history lesson on the nuclear war itself before explaining the current situation surrounding Ace’s death.

After the movie, I found myself at a stereotypical post-apocalyptic desert base, a la the “Mad Max” film series. Vargas gave me a cookie-cutter starting mission: Prove your worth recruits, and I will let you into my super exclusive club. We have outfits and tell ghost stories at night. You are going to want in on that.

The conversation ends, but I wasn’t convinced by his sales pitch. I selected the red targeting reticle next to the picture of my submachine gun, hovered it over Vargas, saw that it had a 50 percent chance of hitting him, and fired. It hit him, and he promptly turned around and curb-stomped my entire squad. I was sent back to the main menu to play again.

Every single interaction that I encountered in Wasteland 2 can be handled in this way. Players can murder, rob, or help anyone they want. It’s possible to wage war against the desert rangers and end the game by wiping them out. In this scenario, players never take the ranger helicopter to Los Angeles. The game simply ends at the halfway point of the traditional storyline. 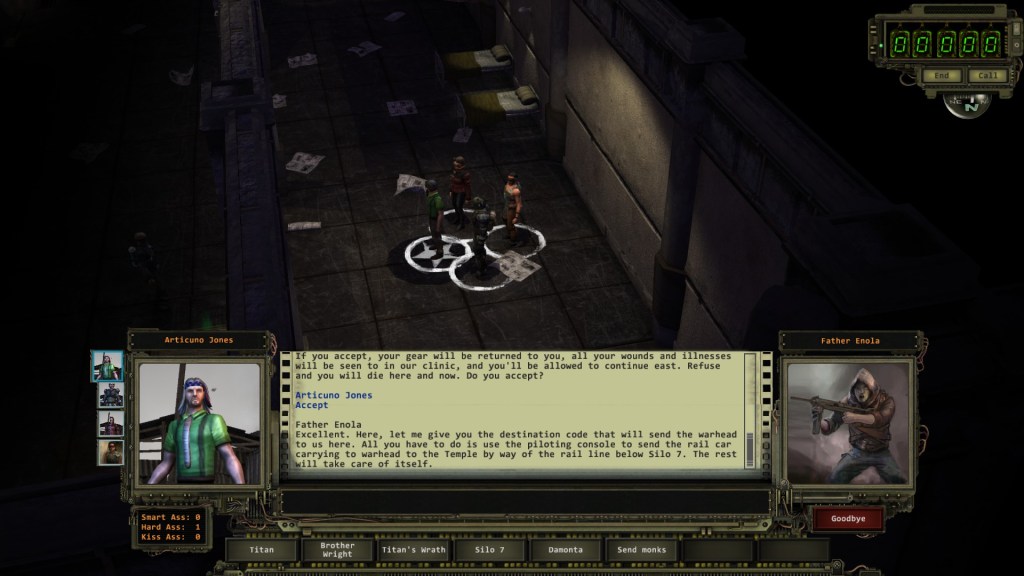 Above: One of many, MANY important dialogue windows in Wasteland 2.

Even positive interactions have their consequences. As Fargo noted in an earlier interview with GamesBeat, Wasteland 2 has more text written into its vast conversation bank than all three “Lord of the Rings” novels. I suggest reading most of these word blocks carefully, as they can make your miserable life a little better.

Another example of Wasteland’s unorthodox gameplay comes fairly early in the Arizona section. I was tasked with saving a farming community and a dam. One provides the rangers with their food, and the other provides their water. Vargas told me to hurry, and my radio exploded with cries for help from both sites. I saved the dam, but it took me a while. By the time I got out, I heard bloodcurdling screams over the radio. I ran to the farm, but everyone was dead or worse — transformed into poisonous pod people bent on killing my squad. I emptied the area of danger, but the farm was too far gone and had to be abandoned.

Could I have saved both? I don’t really know. I expected the typical video game experience where I would save one then arrive just in the knick of time to save the other. That’s not how Wasteland 2 works. Player choices mean more here than in any game I have ever seen. And this is just one of many, many such scenarios.

Given all of the decisions you can make, Wasteland 2’s replay value is vast. I would guess that it features more than 100 total hours of possible story arcs and questing content. The lengthy main storyline is just the beginning of Wasteland 2’s gameplay possibilities.