A sequel can turn a mediocre game into a superstar franchise. Just look at Assassin’s Creed II or Mega Man II; both improved upon decent originals and created long-running series. Watch Dogs isn’t quite that good, but it’s close.

Ubisoft’s Watch Dogs 2 is another open-world city game, similar to series like Grand Theft Auto and Saint’s Row. While its predecessor takes place in Chicago, the sequel has players running around Bay Area locations like San Francisco and Silicon Valley. The change in scenery is nice, but you’re still doing the same things you do in most of these Grand Theft Auto clones. You drive cars, steal cars, race cars, shoot things, sneak around things, and so on.

The big difference between this series and GTA is that you can hack things, so you can tap into nearby cameras or change traffic lights. Still, the gameplay is similar. But at least Watch Dogs 2, unlike its predecessor, isn’t too busy brooding over itself to have some fun. 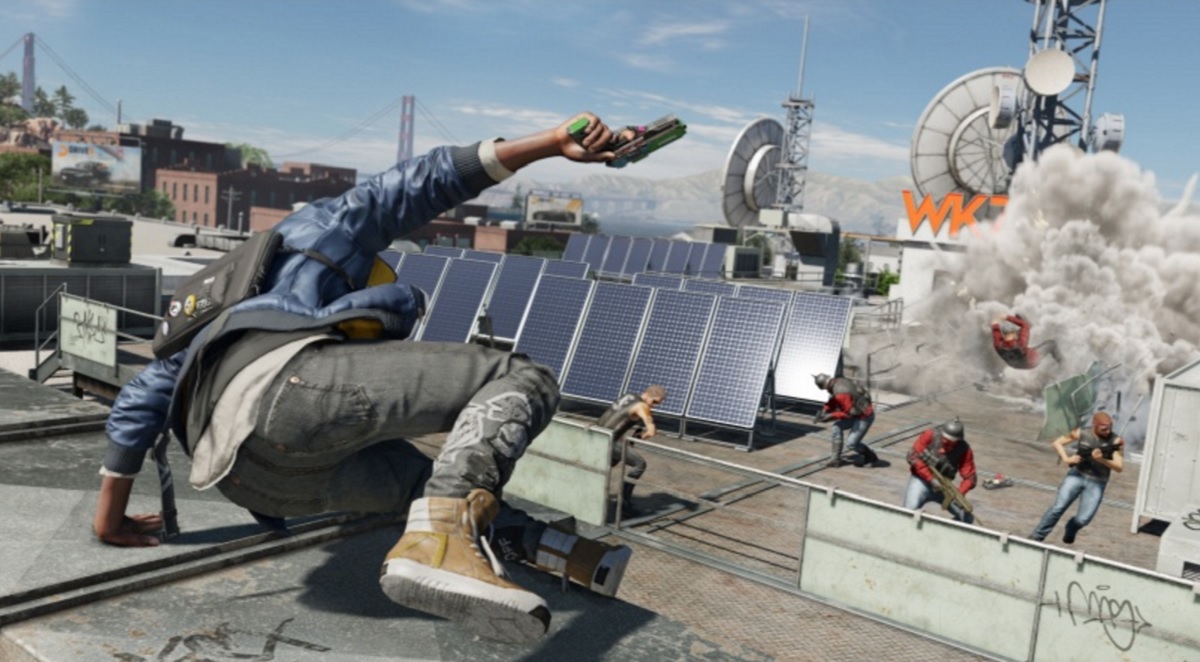 Watch Dogs 2 takes place in the famous California bay city of San Francisco, which happens to be where GamesBeat’s office is located. Now, I work out of Ohio, but I still travel to San Francisco enough to have a decent feel for the city. The digital version in Watch Dogs 2 is fairly accurate, and I had a lot of fun just revisiting the sights I see on my trips there.

While it doesn’t feature the exact same buildings and locations, the layout of the city is familiar. You’ll see all of the famous landmarks, such as Alcatraz and the Golden Gate Bridge. Even if you don’t want to play any of Watch Dogs 2’s missions, you can have fun exploring the city.

I also like that you can explore the entire area right off the bat. After a short introduction mission, all of San Francisco and some neighboring areas like Marin county and Oakland open to you.

The original Watch Dogs is a dark game, all about revenge, death, and the slow collapse of society under an oppressive, data-gathering government. OK, so Watch Dogs 2 still has plenty of that Big Brother stuff going on, but its tone is much lighter. You play as a member of a group of rag-tag hackers that are faster to spout out an ’80s action movie reference than to threaten someone’s life.

This is a fun group, and they have a bond that feels real. I couldn’t name a single character from the original Watch Dogs outside of its star, but I don’t think I’ll be forgetting about Wrench and his digital-display headset anytime soon.

Most missions have similar levity. One had me stealing a faux-futurisic car from a movie set, before racing it through town as promotional stunt for my hacker gang. A notably meta mission had me break inside Ubisoft’s San Francisco office and leak a trailer for an upcoming game. You feel less like a criminal or assassin and more like a fun-seeking activist. 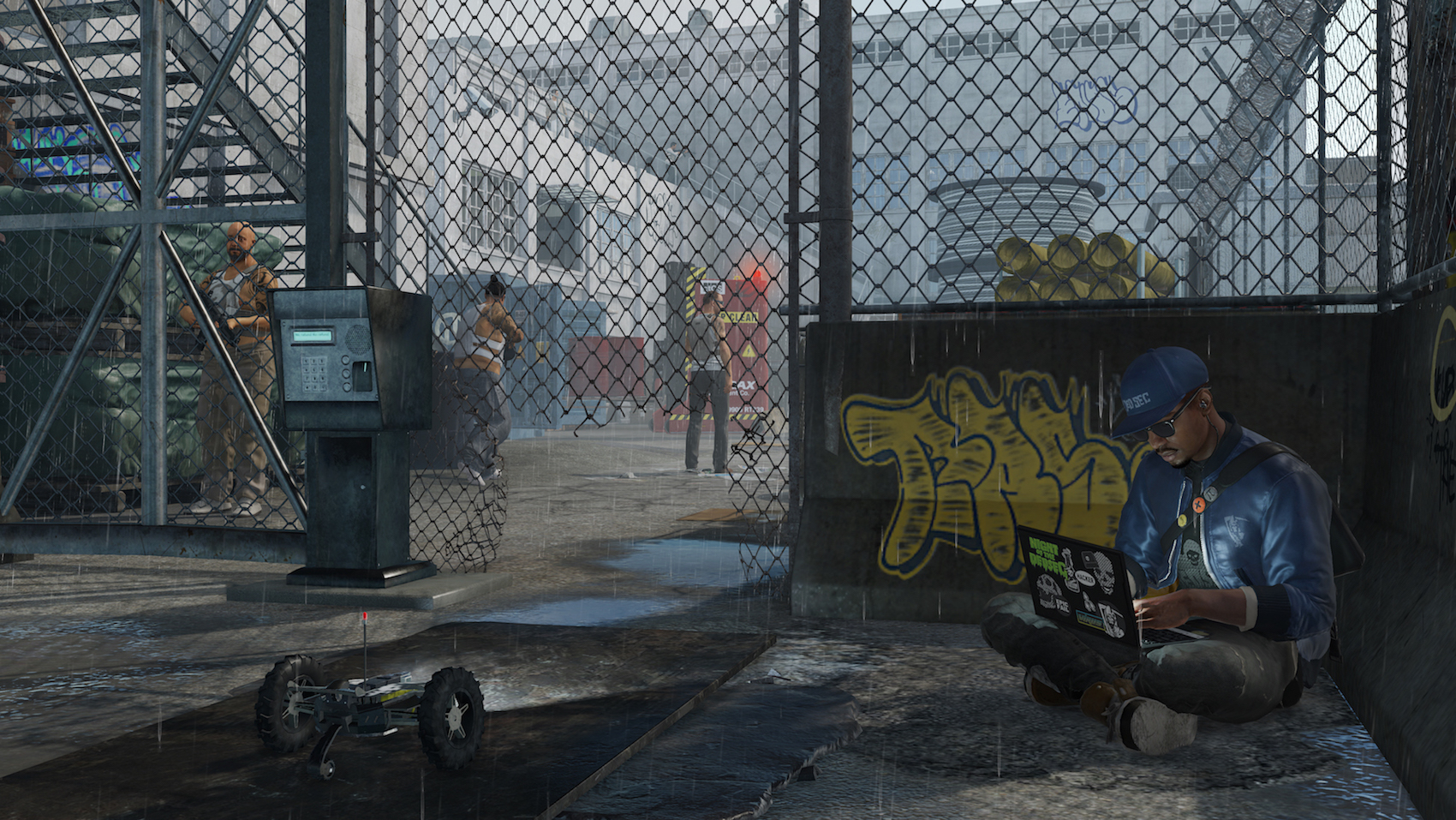 A lot of the game involves infiltrating a place and avoiding detection while you hack something. This is more enjoyable task than in the first Watch Dogs thanks to a couple new gadgets. You have a little RC car and a flying drone that you can use to enter areas that are out of your reach on-foot.

These are fun gadgets that open up your options when going about a mission. You can use them to scout out entire areas, help trigger other hackable objects like a fuse that can take out some guards, or you can just have them distract enemies while you slip by.

These tools become as much the player character as Marcus, the game’s hero.

Most of the time, Watch Dogs 2 ran smoothly enough on my PlayStation 4 (the regular one, as I’m not one of those fancy Pro owners). However, I began noticing some harsh framerate drops. I then realized that these happened every time an online event triggered.

In Watch Dogs 2, other players can pop into your open world. You can then try to hack their information while staying incognito long enough to avoid detection, or try to catch a player doing the same to you. It’s a fun feature, but it was killing my performance. Once I turned these organic multiplayer options off, my framerate was running smoothly.

The whole thing was such a problem that Ubisoft actually disabled the seamless online components while it works on a fix. It’s a major problem that cripples one the whole online component of the game. Mind you, I’m not a huge fan on that seamless online stuff anyway. It just becomes a distraction from the story missions I’d rather be doing. Still, it’s an advertised feature, and it should be working. 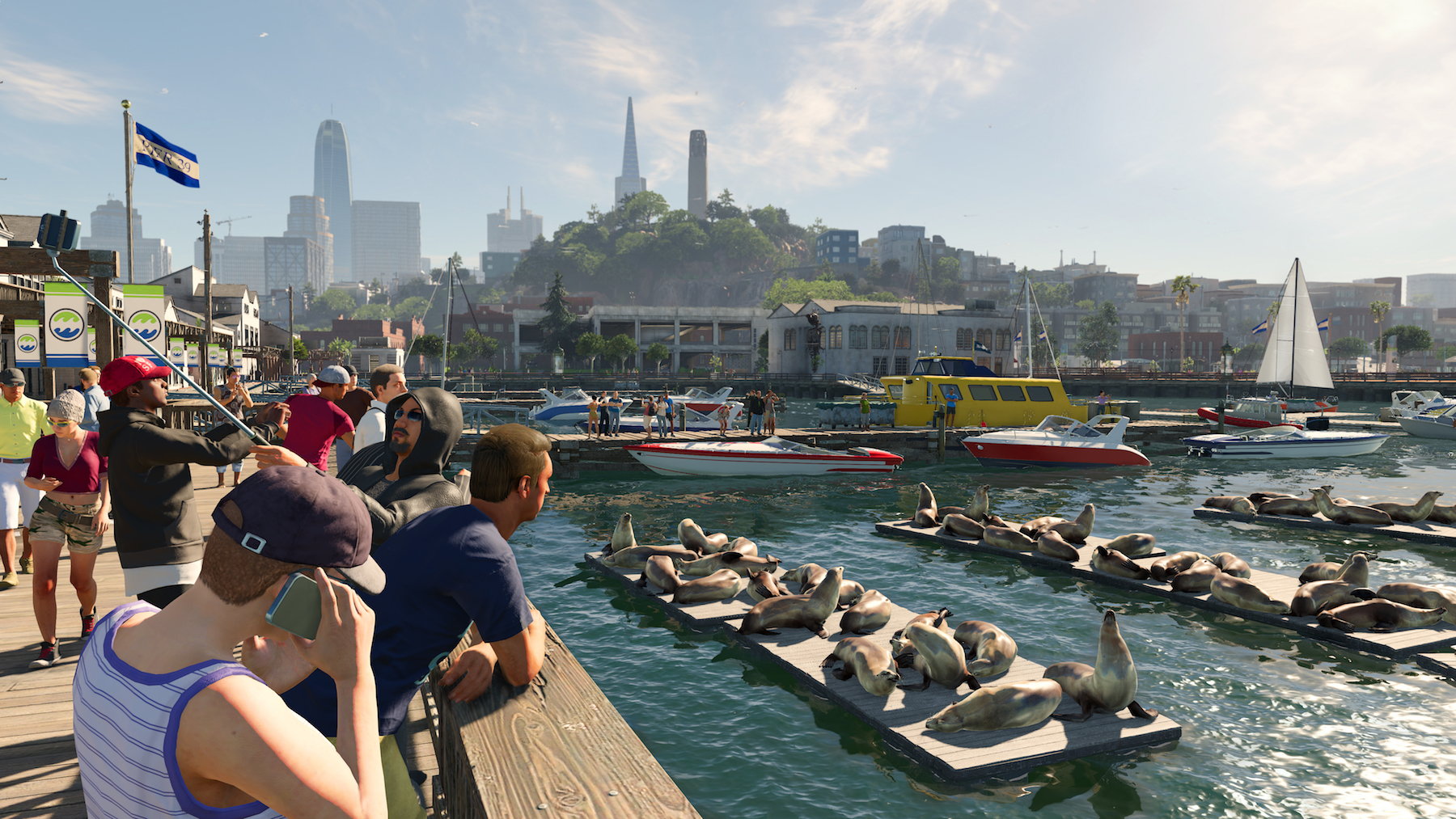 You’re playing as a young hacker. He’s a nerd. He’s good with gadgets and computers. I can even buy into him being able to take people out with his weird, ball-on-a-string melee weapon.

I just don’t buy him as a gun-toting commando.

I guess every character in these open-world games has to be some kind of gun savant, but this would have been a good opportunity to ditch bullets. Why not allow Marcus to depend on stealth and gadgets? Why even give players the option to fight their way through a secured building with an automatic weapon? Sure, you don’t have to ever use a gun, but I don’t understand why they even bother giving players that option.

Removing firearms would have helped to further separate this series from Grand Theft Auto … actually, considering the tens of millions of copies that series sells, maybe that’s exactly why Watch Dogs 2 still has so many guns.

The only thing more ridiculous is how you get these guns: a 3D printer. Yup, just push a few buttons, and out comes a shotgun in a couple of seconds. It feels more like a Star Trek replicator than near-future tech to me.

Watch Dogs 2 doesn’t do much new. Just like it’s predecessor, underneath all that fancy hacking you’ll find a similar experience to other city-based open world games, including Grand Theft Auto.

But at least this time, the adventure is a fun one. The new, light-hearted tone and its likable cast of characters are a good fit for this series. But it’s a shame that Ubisoft couldn’t get its online features working properly before it launched.

Watch Dogs 2 comes out for PlayStation 4 and Xbox One on November 15 and PC on November 29. Ubisoft gave us a code for the PS4 version for this review.