By choosing to set Watch Dogs 2 in the smart city of San Francisco, Ubisoft’s game creators were able to sharpen their criticism of the nation’s tech companies and how they are undermining freedom and abetting criminal behavior through their monopolistic practices and weak security.

It took me a while to get through it, but I highly recommend that you play Watch Dogs 2 as part of your civic duty. The creators of the game are far from California at Ubisoft’s Montreal office, but they managed to deliver a scorching criticism of Silicon Valley and its leading tech companies for their alleged attempts to get rich by betraying the public’s trust and invading our privacy. And it gets really close to reality of our U.S. presidential election through a mission in the game where a candidate for Congress teams up with a company to create fake election news and polls, only to be foiled by intervening hackers. If you’ve got some time over the holidays, I recommend you play the game on the PlayStation 4 or the Xbox One or the PC.

The parodies and satires of the companies were funny, like inside jokes. But they carried a serious message. As hacker Marcus Holloway looks out at the city of San Francisco, he notes how everybody is numb from being treated like sheep. By taking on the big companies and exposing their fraud, their attempts to violate privacy, their plans to lock us into their data networks, and their plans to sell our data to the highest bidder, Holloway tries to fight back.

This has some spoilers. We recommend you read this after you play the game. Check out our Reviews Vault for past game reviews –Ed.

“We’re going to turn them all back into people,” Holloway says, as he looks at the landscape, which is set in the San Francisco Bay Area.

The message isn’t simply to distrust all technology, as so many Luddites would be happy to do outside of Silicon Valley. The solution is not simply to distrust the facts and news and the government on everything. Rather, it is to pay attention to those who are trying to exploit us purely for profit, rather than the common good. The counterforce to the tech companies is DedSec, the hacktivist group modeled on Anonymous and other hacking groups that operate in the shadows and try to use the processing power of their followers to expose the truth.

I marveled as I wandered through the game, seeing so many familiar places in San Francisco and the surrounding area. I walked by the Transbay transportation center, which isn’t yet finished in real life. I also passed by Ubisoft’s headquarters and went for a stroll in South Park. Not everything is accurate, as the Ubisoft designers found they couldn’t squeeze all of the city in. They took liberties like squeezing the Presidio and Golden Gate Park into the same giant park.

But the fictionalized companies were even more interesting, as they allowed Ubisoft’s game designers to make a commentary on the behavior of these companies. Of course, Ubisoft changed the names of the companies to avoid being sued for slander. But Watch Dogs 2 doesn’t hold back in casting a wide net of satire at the tech industry, and it goes after tech companies that aren’t in Silicon Valley as well.

In the election-related mission called “Power to the Sheeple,” Ubisoft correctly anticipated that hackers would try to interrupt the fair elections process. In this case, a company known as InVite — which is either the social network Facebook or Twitter — conspires with a congressional candidate, Mark Thruss, to manipulate users’ news feeds to help reelect Thruss. Ubisoft’s team wrote the game’s script years ago, but that’s exactly the kind of criticism that Facebook encountered about “fake news” in the wake of Trump’s victory.

The resemblance to the 2016 election year shows how prescient, or realistic, the Ubisoft game designers were. The game doesn’t mention any Russian hackers, but the Chinese hackers play a significant role as stealers of secrets and stock market manipulators.

DedSec fights back against the election scam by hacking InVite and turning the polls against Thruss. Holloway defaces one of Thruss’ high-rise billboards.

Thruss panics and asks for a meeting with InVite CEO Mary Catskill. DedSec records their meeting and exposes the fraud. On top of that, Holloway goes to Fort Point and destroys the voting machines in order to foil Catskill’s last-ditch plan to spread a virus through the voting machine network.

I had some fun figuring out who some of the companies were (thanks to @docjay on Twitter). Google was obvious, as its colorful logo was a dead giveaway in the game, where it is dubbed Nudle. You check out Nudle maps on every mission, and you hear reports about how it’s moving into the car industry. You can visit the company’s campus, driving past a highway sign (that doesn’t exist) called Welcome to Silicon Valley. The campus has lots of sports cars in its lot, and I stole one for a joy ride. 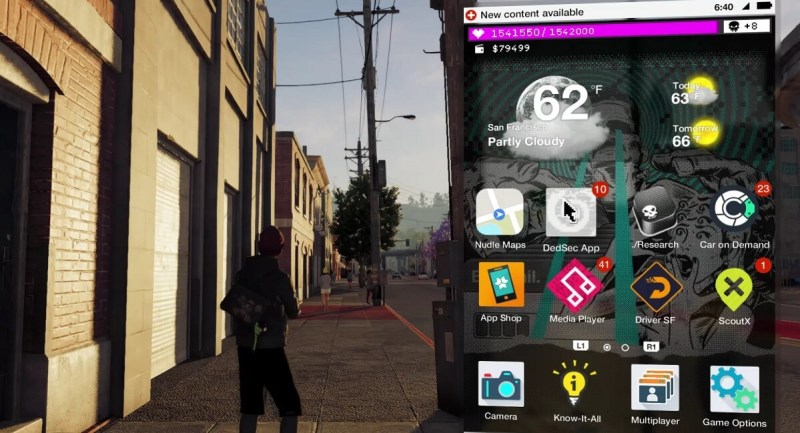 Above: The apps on your phone in Watch Dogs 2.

In one mission, you get to drive one of the buses that carries employees from San Francisco to Google’s campus. As the only two African American characters get off the bus, Holloway says to the other black man, Horatio, that he’s scared because nobody looks like them.

Horatio says, “Ha, man, welcome to Silicon Valley. Hey, what do you call a black many surrounded by thousands of white people?” Holloway says, “What?” And Horatio says, “Mr. President.” Horatio goes on to say that there are only three black people who work at Nudle.

Respnding to a cheerful comment from Holloway, Horatio says, “Hah. You haven’t experienced corporate life until you’re the only brother in a meeting and have to represent all of blackdom. If I had a nickel for every time someone complimented me for being ‘well-spoken.'”

That’s a not-so-subtle reminder that Silicon Valley has a huge diversity problem, as white males are the bulk of the staff at many of the companies.

The game has many missions that simply chronicle the headlines from incidents, such as the hacking crusade against the Church of Scientology and the hack of Sony Pictures. 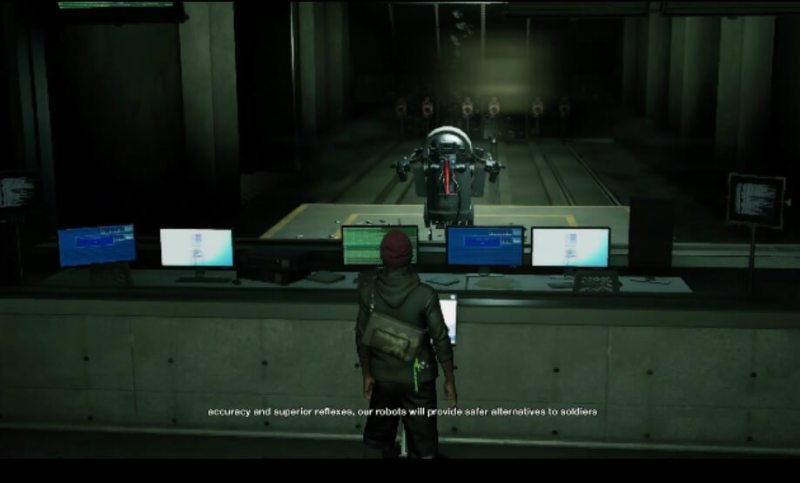 Above: Tidis is making crowd control robots in Watch Dogs 2.

Tidis was a maker of benign service and security robots. It was actually hiding a bunch of riot control robots aimed at keeping the crowd under control and docile. That seemed a lot like the dual purpose of iRobot, the maker of the popular Roomba vacuum robots and the military robots that clear tunnels in war zones such as Afghanistan. 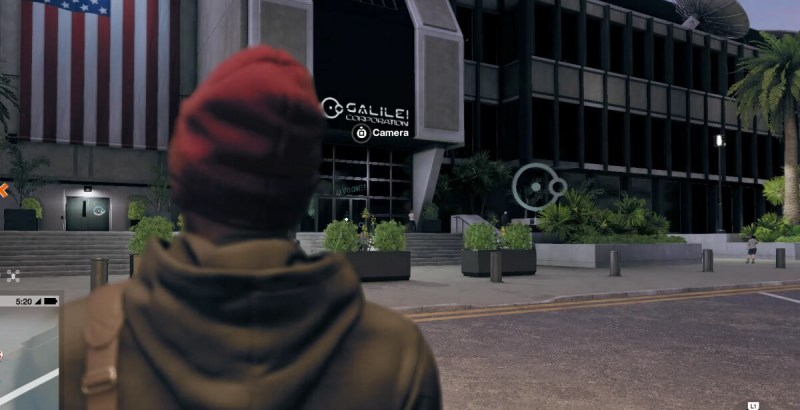 Another mission takes Holloway to Gallilei, a rocket company modeled on Elon Musk’s SpaceX in Los Angeles. In that mission, Holloway hacks into a satellite on board a rocket. He then uses that backdoor to discover a global communications network, aimed at both hiding the Internet from hackers and spying on users across the globe.

You can use an Uber-like app in the game to summon cars. Or you can be a driver and pick up rides and make extra money. You can take selfies with an app called Scout, which resembles Instagram. Your friends will make comments about your pictures, and you can earn rewards if you take selfies at landmarks. You can make an excursion with the DedSec team to Burning Man, dubbed Swelter Skelter in the game. There’s lots of bonfires, goofy outfits, and drugs. 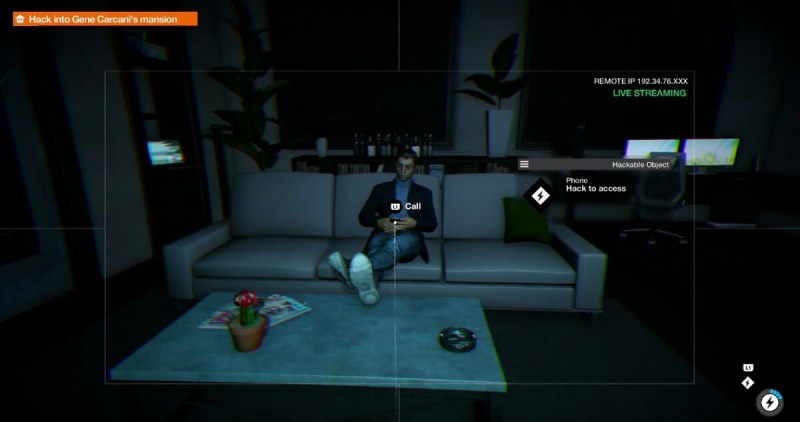 Above: Gene Carcani is a villified pharmaceutical CEO in Watch Dogs 2.

The game also shows no mercy for greedy executives. One minor side mission focuses on a greedy pharmaceutical company CEO named Gene Carcani. His story bears more than a passing resemblance to real life Turing Pharmaceuticals CEO Martin Shkreli, who drew criticism for hiking the cost of a life-saving drug by 4,000 percent. In the mission, the hacktivist anti-hero of Watch Dogs 2, Marcus Holloway, and his DedSec hacker group try to publicly shame the CEO.

There is plenty of criticsim of the National Security Agency’s spying against Americans without search warrants. And a company called Haum (perhaps Google’s Nest in real life) gets caught trying to sell personal data collected from home monitoring systems.

The ultimate criticism goes against Blume, the company that launches a nefarious scheme to control all information, from the Internet’s backbone to systems that are supposed to guarantee the secure delivery and protection of private communications. Blume has its fingers in all the pies, and I can’t quite figure out if it is really Oracle or Palantir or Apple. In any case, there’s a Blume Arena in the game in Oakland, and in real life, that’s Oracle Arena. 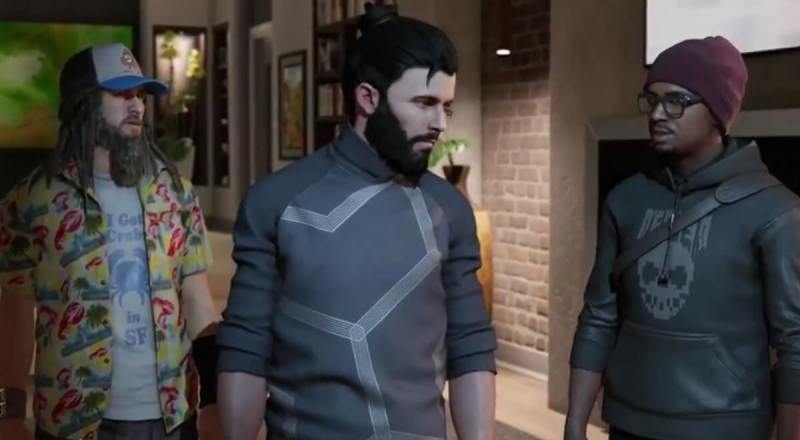 Above: Dusan Nemec (center) is the CTO of Blume and the bad guy in Watch Dogs 2.

But Ubisoft didn’t completely tar Blume as the bad guy. Rather, it pinned the blame for the scheme on the company’s chief technology officer, Dusan Nemec, and in the end, the company singles him out as a bad apple and says it wasn’t aware of what he was doing.

So far, nobody has filed a lawsuit against Ubisoft for libel or slander. That shows that Ubisoft disguised its truth with the appropriate mix of fictionalization and satire. I like the fact that the game has something to say. And after exposing so many nightmare schemes and scams, Holloway gets a moment at the end to inspire us all to fight back. Here’s the ending. It’s a little heavy handed, but most of the game is a light-hearted romp. And yes, you’ve been warned about the spoilers, and warned about whether you can trust tech companies or not.