Ubisoft showed off a lot of new gameplay for Watch Dogs: Legion, the third in the popular series that pits hackers against the authorities in modern cities. The game debuts October 29 on Xbox One, PlayStation 4, PC, and Stadia. It will also debut on the Xbox Series X and PlayStation 5 when those consoles debut this fall.

The new action-adventure game is set in a near-future London, where your job is to expose crimes and corruption in the surveillance state. Ubisoft publicly revealed the gameplay during the Ubisoft Forward event today, which comes just a day after CEO Yves Guillemot announced major departures and changes related to sexual misconduct allegations at Ubisoft. This started in late June as people came forward and told their stories alleging harassment, misconduct, and more from Ubisoft employees.

I played the game on Parsec, the remote-download technology for the PC. You can check out 20 minutes of gameplay from different missions in the embedded video. When Ubisoft introduced the game at the start of the Forward event, it showed a short film of a chase scene as the authorities try to nab a hacker.

The opening video was narrated to a variation of the “First they came” poem about how people did nothing to resist the Nazis during the Holocaust. Yes, I’m sure Ubisoft won’t say it’s talking about today’s Black Lives Matter or #MeToo calls to get involved in U.S. politics, but it is quite eerie to hear these calls to action in the context of our current reality. Ubisoft always skates this edge, trying to make its video games feel relevant to today’s issues, but staying out of the quagmire of politics that could result in lost sales. Some people may find it offensive to use something dedicated to the Holocaust to promote a game, but others might view the poem as an anthem for resistance of all kinds.

Xbox head Phil Spencer said in the Forward event that Watch Dogs: Legion will support Smart Delivery, where you can play the best version of the game on the PC or Xbox One or Xbox Series X, depending on what you won. The Xbox Series X, the new Microsoft console coming this fall, will support DirectX ray tracing, which enables rich graphics for shadows and lighting, for an immersive experience of London.

The big feature that Ubisoft already revealed is that you can play as any character in the city. You simply have to recruit them to your cause as a member of DedSec, the hacker group that fights the establishment. But there’s one catch. If your recruit dies in a mission, you permanently lose that character and their capabilities. So you shouldn’t treat them like cannon fodder.

This time, Ubisoft showed the opening cinematic and the triggering events for the story’s conflict. A hacker group takes on a corporate overlord who runs a paramilitary company and is trying to take over London on the pretext of preventing terrorism.

Ubisoft showed some gameplay at its Ubisoft Forward showcase today, an event which is a substitute for what it would have shown off at the canceled Electronic Entertainment Expo (E3) — or what we’re calling “Not E3.” 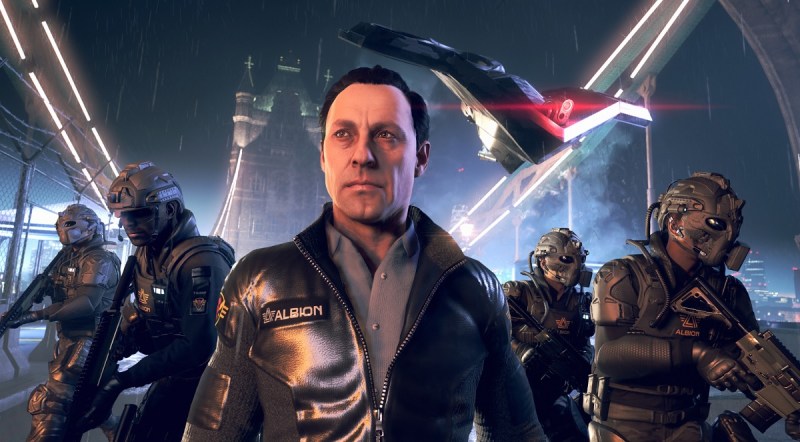 Above: The corporate bad guy in Watch Dogs: Legion.

At the outset, I played the beginning of the single-player campaign as a recruit named James O’Callahan on normal difficulty. A trailer revealed London in all of its animated glory, and how it took “one night to tear it all down.”

You start as Dalton, a James Bond-style agent in a nice suit on the London waterfront. With the help of the DedSec hacking group and its Bagley artificial intelligence system, he goes underground and breaks into a high-security building to investigate a bomb threat against Parliament. Playing as Dalton, I immediately ran into a security guard that I had to beat up. Fortunately, I didn’t trigger any alarms and stayed in stealth.

I came upon a locked door. By pointing at the lock and pressing L1 on the Xbox controller, I could see a wire that went back to a security box. I went over to the security box, hacked it with the press of a button, and then disabled it and moved inside the building. There were a lot of workers around, so I set some electric shock traps that immobilized some of them.

Inside, Dalton locates a bunch of bombs underneath Parliament, with a number of armed guards. I distracted them and ran past. One guard saw me, so I knocked him out. I kept going upstairs and found the detonator. Bagley, the AI, helped me disarm it. But the detonator had a booby trap. Armed thugs came into the room, and I had to take them out creatively, with electric shocks or just plain shooting. I was slow to realize I could have set shock traps all around the room to bring the thugs down faster. But I used my gun instead.

Once I cleared that room, I went to the roof to disarm yet another detonator. But there I found that Dedsec had been pwned. Another group had set up bombs around London, framing DedSec for the crime. The bombs went off, DedSec got raided, Bagley got shut down, and I had to go on the run. 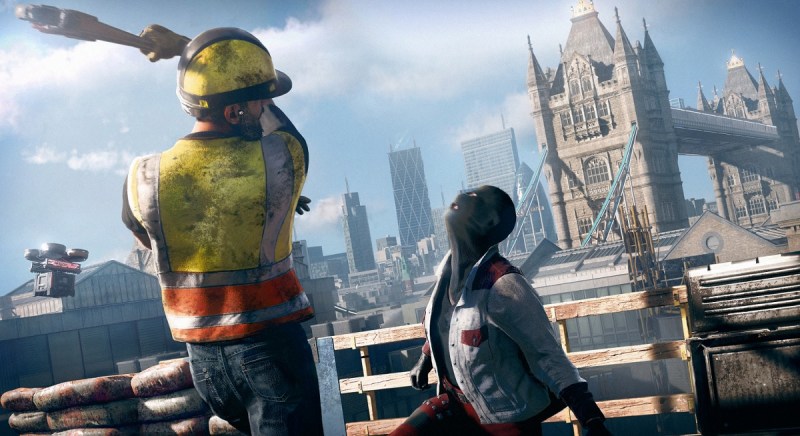 Once I was out in London again, my job was to recruit more people to DedSec. I could choose from almost anyone, but there are people with special capabilities who are highly desirable. I went after one of them, and he told me that one of his friends had been killed or kidnapped. I looked up the friend in a hacked computer, found where he was being held, freed him, and successfully recruited the friend to DedSec. At that point, I could switch between characters and use the new recruit for special missions.

A construction worker can be useful for infiltrating a worksite for a mission. If you need to get into a police station, it’s good to recruit a cop. But some characters will be more likely to join DedSec and some will prefer the bad guys, the corporate mercenaries at a company called Albion.

After the opening mission, I was free to recruit people and fulfill more missions, either on the main story or on a side quest. I enjoyed being able to pick up any car I wanted, hijack any camera, use my own drones, or ride in the air on a cargo drone. I also felt quite powerful being able to distract guards by zapping their headsets or smartphones, and hijacking the enemy’s own sophisticated equipment. 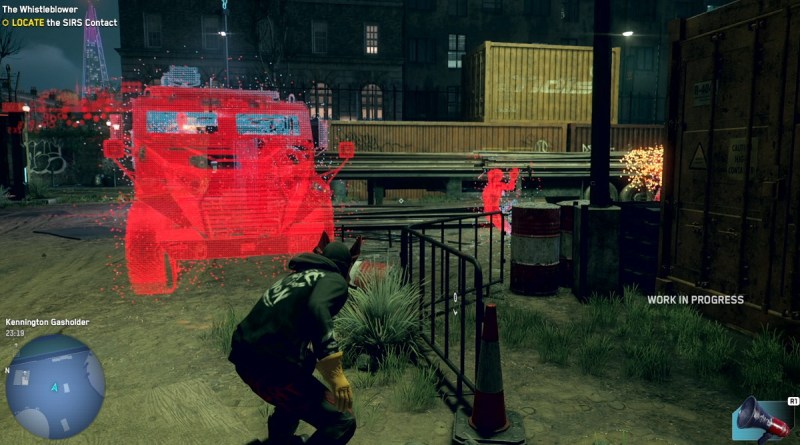 Above: Using AR to sleuth in Watch Dogs: Legion

I liked one mission in which I made contact with a source at a construction yard. The source wasn’t there, so I had to use augmented reality sleuthing. That meant I located a security camera, hacked it, and looked through its records. I saw a military vehicle show up and capture the contact. Then they left.

I then got into my car and followed the AR reconstructions of the vehicle (cameras captured its journey through the city) as it moved to another location. The contact was tied up and thrown into a holding cell. I made my way into the building, hacked the door, fought against some drones, and freed the contact.

I’m not sure how good the story is with just a few hours of gameplay done, but it starts out well. I just worry that the lack of a main character — if that really is the case — could make it less compelling for players trying to power through a large open world story.