PlayStation finally gets another Dragon Quest, but it’s not really a role-playing game.

Next year is the 30th anniversary for Square Enix’s Dragon Quest role-playing game franchise, and the company is celebrating by releasing one of the few spin-offs in the series, Dragon Quest Heroes: The World Tree’s Woe and the Blight Below, coming to PS4 later this October. The series is best known for bringing together famed Japanese creators, including game designer Yuji Hori, manga artist Akira Toriyama, and composer Koichi Sugiyama. And in America, the franchise is also known for spotty releases — the last Dragon Quest game on PlayStation was Dragon Quest VIII on PlayStation 2, 10 years ago.

Square Enix revealed today that Dragon Quest Heroes: The World Tree’s Woe and the Blight Below is available this Oct. 13. It comes in a standard release for $60 as well as a limited “Slime Collector’s Edition,” which includes a plush Slime, a keychain, and a lanyard, priced at $100.

Rather than the usual turn-based role-playing game systems, Dragon Quest Heroes goes the action route, powered by Tecmo Koei’s Omega Force, the team behind the Dynasty Warriors tactical hack-and-slash games as well as the recent Nintendo collaboration Hyrule Warriors. Dragon Quest Heroes has the team’s trademark hordes of enemies to mow through with sword and magic attacks, but the enemies are straight out of the DQ’s history books, so you’ll be fighting Slimes, Drackys, and Golems instead, all sporting their trademark happy faces. It it wasn’t clear from the promotional material, if you’re not a fan of Toriyama’s artwork, this game is definitely not for you. 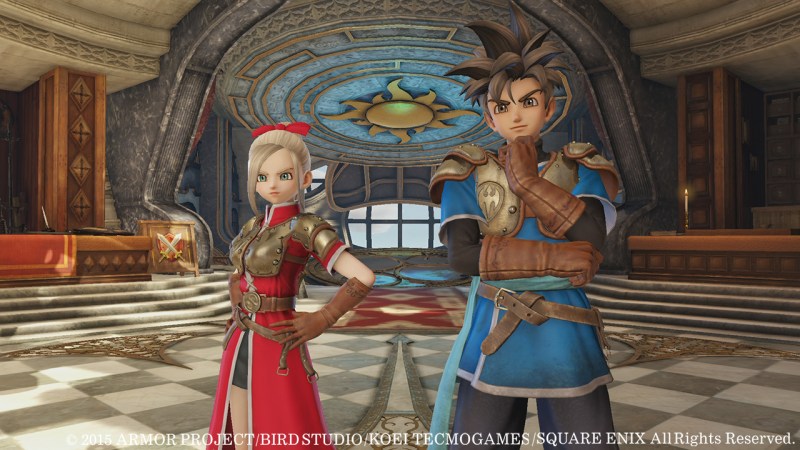 It’s not just an action game, though — a few tactical twists Dragon Quest Heroes leaning more toward its role-playing roots. Parties are made up of heroes from previous series games, and players can switch between them at any time to use their unique attacks and magic abilities for a given situation. In a demo, I was able to switch between Aurora, the sword-wielding main character, and Dragon Quest 4’s Kiryl or Alena, among others. This allowed me to change attack ranges to best match the variety of enemies of the stage. When the other characters aren’t being used, they’ll fight in the background against other enemies.

A second demo showed some of the light strategy elements of Heroes. My team was again led by main character Aurora, and joined by Dragon Quest VIII alum Jessica and Yangus. In a walled city, we ran around trying to defeat a Gigantes, which are several stories tall. Standard attacks only barely ticked his life bar, so part of the strategy was to lead him toward ramparts where magic cannons could hit his weak spot, his huge eye. Enough hits would leave him vulnerable, letting your party go to town on him. The goal was to take the Gigantes down before time ran out (his health bar was almost as wide as the screen), which I wasn’t able to do.

The demo skirted some pretty big parts of the game, including the story elements and the central town. It also has an upgrade system that was not represented. These are aspects that could help win over a fan of the role-playing game, so it’s a shame that we missed those. 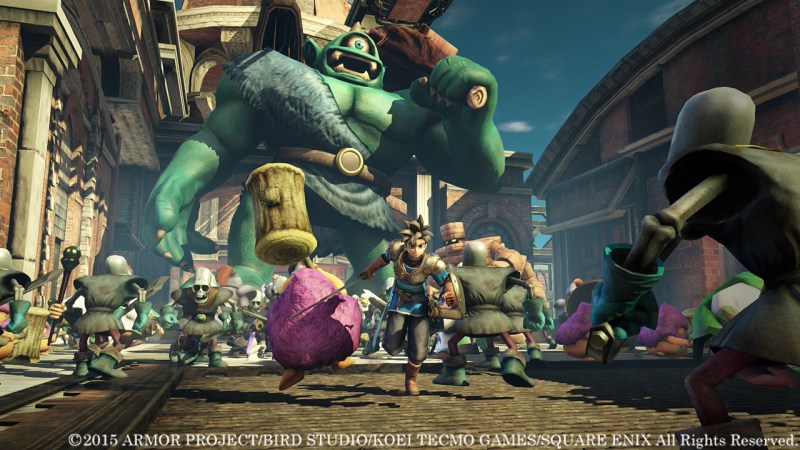 Above: This is the Gigantes that I couldn’t beat.

It’s not really Dragon Quest as we know it, but between the character roster, happy enemies, retro musical cues, and other elements, there’s more than enough fan service to make up for that. Only more time with Heroes will reveal if it’s any more involved than the Dynasty Warriors games, but I’m sure that won’t matter much to series fans.